19 Classic Songs about Respect (for Others and Yourself) 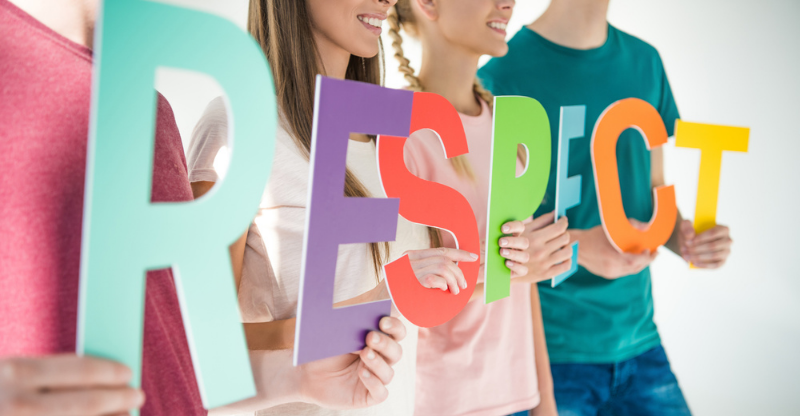 No self-respecting person is going to put up with disrespect, right? This playlist is full of songs about respect that encourages you to respect yourself and respect others around you. A little respect goes a long way, so be sure to get what’s rightfully yours!

Most people who have ever been exposed to oldies radio stations or popular movies will probably be able to recognize this song. It charted at number 1 in the US and 10 in the UK when it was released and has stayed popular over the years. You may be surprised that this is a cover originally performed by Otis Redding in 1965. The song is about demanding respect from your lover because it’s what you deserve.

Related: Check out more famous songs on our list of all-time classics.

Respect Yourself – The Staple Singers

This empowering song promotes self-respect, pacifism, and being a decent human being. The song lists several things that make you a self-respecting person, like stopping air pollution, covering your coughs, and not thinking that everyone owes you something. The song charted at number 12 in the US and was pretty popular during the Civil Rights Movement.

This song is often considered one of Erasure’s best songs, and some even say it’s a perfect pop song! The narrator is asking his lover to respect him. Since one part of the lyrics suggests that his lover has forsaken him, you can assume that the narrator doesn’t feel loved by his (ex?) partner even though he’s desperately in love with him.

Related: Go to our playlist of good karaoke songs.

In this song, the singer promises his lover that he’ll always be there for her, despite everything that could go wrong. The song is straightforward; it lists all the things he’s promising. Radiohead was going to release this song on their 1997 album, OK Computer, but decided against it. They released it as a bonus track in 2017 on the rerelease of the album for its 20th anniversary.

Lovers like to express their love for each other in the form of “you’re the X to my Y,” and this song is full of those metaphors. Miguel wrote this song as an apology to an ex-girlfriend after cheating on her in an attempt to show that his love for her was genuine. It charted at number 36 in the US when it was released in 2010.

Related: see more songs about cheating on someone.

The Rolling Stones weren’t always respected by high society. Once they were, Mick Jagger’s wife got to meet the US president’s son, and that’s what this song is about. The song is pretty sarcastic and criticizes how high society shunned them at first but eventually changed their minds. The song charted at number 23 in the UK.

According to The Lox, if you have money, you’ll get power, which will land you some respect. The Lox flaunts all the respect they have in this song, along with their girls and material items. They were pretty respected since this song charted at number 17 in the US.

The singer is so in love with his girl that he’s willing to ignore what everyone says about her and give her the respect he feels she deserves. He says he’ll catch her cheating on him if he wants to believe it—it doesn’t matter what others say about her! While this relationship may seem a little rocky, there’s no doubt he loves her!

Here’s a song about showing respect. Bobby Willis asks everyone to take a minute to respect the history behind items we take for granted. He talks about how everything from football teams to vehicles has a long history behind them, and we should take a minute to appreciate that, even if we don’t know the story behind it. Someone had to make the computer you’re using or the food you’re eating, so show them some respect!

This song is all about having self-respect and not putting up with people who refuse to give you the respect you deserve. The singer talks about how she’s strong and can stand up for herself, so you better not make her mad! This song encourages believing in yourself and never settling for less.

Beyoncé wrote this song about her husband cheating on her, and you can hear her rage in the lyrics! She’s angry and refuses to apologize for it, and rightly so. Beyoncé has too much self-respect to tolerate getting cheated on, and she tells her husband in this song. The song charted at number 11 in the US and 33 in the UK.

Related: Go to other classic songs about being cheated on.

Do You Really Want Me (Show Respect) – Robyn

Robyn tells men how they should treat women in this song if they want to keep them around. She says women will hate you if you don’t show them respect, but treating them right will be rewarding, and keep them around. This respect song charted in the Top 40 in several countries and ranked number 10 in the US.

This song is on the album called The Last Ship, which has music from the musical of the same name. The musical is about shipyards that closed down in England and how they affected people’s lives. This song is about how the shipyard workers need to be respected as skilled workers, and everyone who lost their jobs needs to be remembered and respected, too.

The Notorious B.I.G. tells his life story in this song, starting with his mother ready to give birth and ending in 1994 when the song was released. He tells of the trouble he got into as a teenager and that his mother told him to stop disrespecting himself. In the song, he talks about how he wanted to be the king of New York and respects everyone who made it before him.

No Matter What – Badfinger

The narrator of this song tells his partner he will always be with her no matter what happens. He promises that he’d give her all of him if she could reciprocate the feeling. The song charted in the Top 10 in the UK and the US.

Related: See more songs about getting through hard times.

Pink is tired of catcalling from men and not getting any respect. This song empowers women to demand respect from men because they’re more than just pretty faces and not take their free offers like limousine rides. Pink references Aretha Franklin’s ‘Respect’ when she spells out the word in the chorus.

Kendrick Lamar talks about how he wants a loyal partner by his side. He’s doing well in this song; he’s got a long resume and plenty of success under his belt, so he wants someone who’s sticking around for the right reasons. This song charted at number 14 in the US and 27 in the UK.

This is a cover of the well-known ‘Respect’ performed by Aretha Franklin that was initially written and performed by Otis Redding. Stevie Wonder’s version is more like Redding’s in terms of lyrics, but it’s musically flavored like Franklin’s version, making it a delightful blend of the original and the most famous.

This song calls for peace and mutual respect for everyone around you. The song is religious and references God, Christ, and Armageddon. The song is essentially saying to live peacefully and be thankful to God for the world we’re living in. The song charted at number 5 in the UK.

Related: This one also appears on our playlist of songs about healing the world.