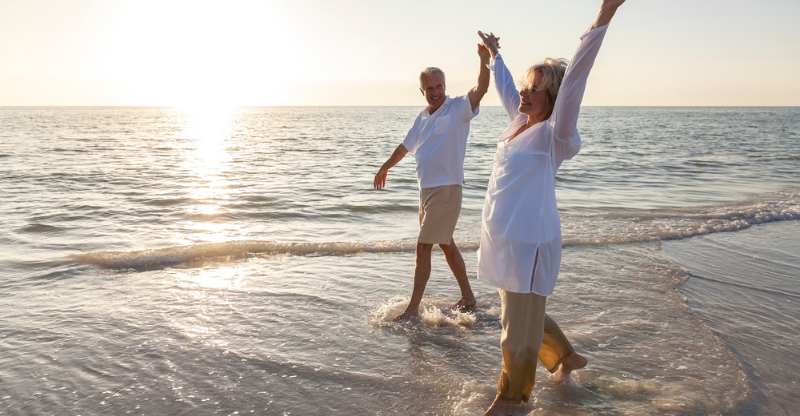 Ah, retirement. A day most people dream about for a long time. These songs all feature themes that go right along with retiring and moving on to life’s next phase.

From second chances and lessons learned to retirement day celebrations, here are some of the best songs about retirement you can crank up and groove with as you celebrate freedom from the 9-to-5 grind!

The Best is Yet to Come – Frank Sinatra

Ol’ blue eyes said it best with one line now etched into his gravestone in Cathedral City, CA. This is the last song he’d ever sing publicly, and it has since been covered several times by artists like Michael Buble. This song was out of this world, literally. Tony Bennett lent his version to the Apollo 10 astronaut crew in 1969 to serve as their “wake-up” song.

Take it Easy – The Eagles

The Eagles remind you to “take it easy” in one of their most popular songs about taking life’s ups and downs in stride. “Don’t let the sound of your own wheels drive you crazy.” Lead vocalist Glenn Frey had stardom in mind when recording the song and felt part of its message should serve as a warning to not get in your head too much and let bad thoughts consume you.

We Have All the Time in the World – Louis Armstrong

Though this Armstrong tune wasn’t a hit when it was first released, its prevalence in pop culture helped it gain popularity through the years. A heartfelt single about love being the purpose of life, it was first used in the 1969 James Bond movie installment, Her Majesty’s Secret Service. Decades later, Guinness would put it to use in one of their beer commercials.

Though this song didn’t appear on an album until The Beatles’ Yellow Submarine in 1967, Paul Macartney actually wrote ‘When I’m 64’ when he was only 15. He used to perform the folksy tune for his bandmates when they went by the stage name, The Quarrymen.

These Are the Days – Van Morrison

One of Van Morrison’s lesser-known hits, ‘These Are The Days’ takes you on a meditative, transcendental journey with a moving instrumental opening featuring dreamy guitar riffs and a backing string section. Reaching repeated success with several chart-toppers in the UK and Ireland (he’s originally from Northern Ireland) and gaining popularity in America with hits like ‘Brown-eyed Girl,’ his unique style of music has often been described as Celtic-Soul.

Though John Lennon and Yoko Ono took a year-long break, he decided to return to her for good in 1975. When their son Sean was born, he dedicated himself to domestic life fully, which didn’t sit well with a lot of people. He tells these critics in ‘Watching The Wheels’ that time spent with his family is never wasted. He’s “no longer riding on the merry-go-round” of fame.

Happy Together – The Turtles

This popular classic hit is a song with somewhat of a hidden meaning. Though it is often referenced as a love song, according to the original writers it is actually about unrequited love. “Imagine how the world could be so very fine, if I should call you up.” The main character of this layered story is pleading with a girl to imagine a world where they are “so happy together.”

Sergeant H’s fun, reggae-tinted tune is about, you guessed it, celebrating your ‘Retirement Day.’ This song has received a lot of organic traction due to its novelty theme and upbeat tone. It has become an in-office staple for retirement parties during presentations.

A reflective song about how precious life is, John Ondrasik (who goes by the stage name, Five for Fighting) wrote this tune as a coming of age story. As you walk down memory lane with the singer, you get a glimpse into his life in lyrical snapshots he shares, from falling in love with his wife to them having their first child.

This tropi-country song has Jimmy Buffett’s coastal cool mark all over it. Jackson and Buffett pair up for this chart-topping single about embracing island time. The fellas throw caution to the wind as they drink Hurricanes and destress, momentarily leaving behind their life’s worries in their metaphorical Margaritaville.

Lady A combines three-part harmonies and their country-pop sound to convey an important message with this tune about leaving your mark. In the song, which takes on an anthemic theme as they ponder all the ways they could make history, they warn the naysayers, “I will prove you wrong. If you think I’m all talk, you’re in for a shock.”

Can’t Take it With You – Allman Brothers Band

This raucous tune is southern rock at its finest. ‘Can’t Take it With You’ features brazen harmonica and gritty vocals. Though it’s a great song to blast while cruising down the road on your Harley, it’s got an important message hidden in the lyrics. Honesty is the best policy. Love, regret, and pain- you can’t take it with you when you go.

This composition has been around for quite some time. ‘Rockin’ Chair’ was first composed in the late 1920s. The first major artist to cover it and put it on the map was Louis Armstrong in the 40s. Decades later, Eric Clapton would put his own spin on it and release the tune on his self-titled album. It was originally released as a jazzy tune, but once Clapton took over, he added his classic blues stylings and gave it a modern makeover.

Sinatra’s smooth vocals ease us through this hit song you’ll be swaying to in no time. As rock n’ roll began to overtake Sinatra’s Rat Pack music in the mid-1960s, he went searching for a song that mirrored his defiance and stumbled upon ‘My Way.’ “I faced it all. And I stood tall.” Don’t let Sinatra’s sultry, baritone voice fool you. This is a song about pure grit and self-determination.

Related: Seth McFarlane does a great version of this in Sing (the movie).

Donovan’s ‘Gold Watch Blues’ is an oldie but a goodie. Throughout this Dylan-esque, acoustic-based track, genres including folk, bluegrass, and outlaw-country can be heard. The English songwriter tackles corporate greed with memorable lines like, “Here’s your gold watch and the shackles for your chains,” and, “We only take on men, who work on until they die.”

Jimmy Buffett’s signature tune paints a lazy, tropical scene with a protagonist who took a vacation that never ended. As he tells the listener about what he spends his days doing (strumming his six-string and getting tattoos) he confesses, “Some people claim that there’s a woman to blame. And I know that this is nobody’s fault.” Keep listening to see if he changes his mind about that 😉

This swagger-filled electric blues tune will make you want to hit the open road with this song humming in the background. Dion sports tried-and-true blues riffs with easy-listening lyrics driving home his need to be free. “A man’s gotta go where a man’s gotta go.” He doesn’t mind company along the way though, as he follows that line up with, “You can ride with me baby, just tell me I wanna go.”