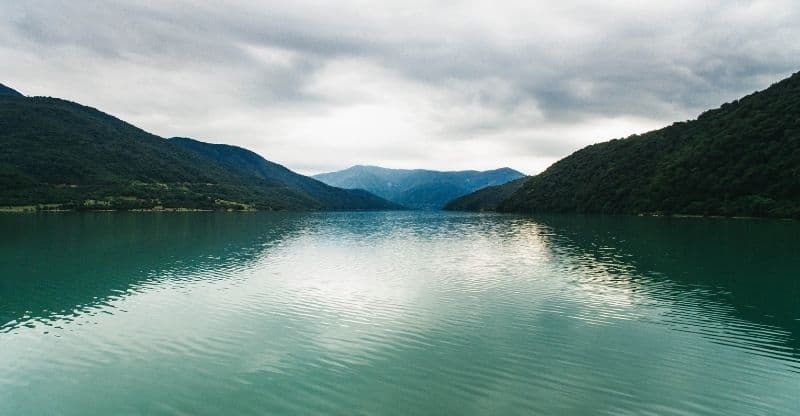 Life is a lot like a river. It ebbs and flows. Sometimes it’s calm, other times, it’s rough as anything.

It should come as no surprise then that musicians use water – and particularly the river – as a metaphor to describe love, resistance, serenity, sorrow, heroin addiction, and a load more.

So here are the best songs about rivers ever written. You’re about to find some top songs here, by the way. I hope you have some spare time on your hands 🙂

Here, the river symbolizes hope and the optimism of youth. But as the narrator grows up, their dreams and their love for each other dries up (he use the “river dying” analogy), just like the river.

It’s Springsteen at the height of his powers. If you’re not moved by it (even a little bit) there’s something wrong with you!

Dylan always had a love-hate relationship with the music business. Most of the time, he was operating on a different level – producing work that will stand the test of time like how we still talk about Shakespeare today. No surprise then that he got fed up with it all.

Here, he considers packing it all in and just sitting back and “watching the river flow” rather than trying to swim upstream. Here’s an in-depth review of the song if you want to geek about a bit.

‘Take Me to the River’ – Talking Heads

Talking Heads took this gospel-induced Al Green song and introduced it to the new wave rock crowd. Surprisingly, they dug it (that was probably thanks to the way David Byrne delivered it). There’s a whole spiritual vibe going on here, with lyrics about baptism (“dip me in the water.”)

‘Down by the River’ – Neil Young

Here’s a highlight of Young’s early period with the brilliant Danny Whitten on rhythm guitar. This extended jam helped cement him as a serious songwriter and performer.

Some think the river represents heroin (“shooting up” = “I shot my baby”). But, equally, it could have been inspired by traditional folk music where there’s such a thing as a ‘murder ballad’ (e.g., the song ‘Knoxville Girl,’ where the narrator kills the girl he loves.)

The Euphrates River is the longest in Western Asia and one of the most historically important.

But that’s where the history lesson stops. This song appears on their excellent debut album Surfer Rosa and has nothing much to do with rivers but rather…well, I’ll leave that to your imagination (no prizes for guessing what the Gaza Strip refers to).

The Grateful Dead write songs that people really love. Now and again they do the odd cover like this Johnny Cash song called ‘Big River’ from 1958. Here they breathe new life into it.

The Mississippi River is the fourth-biggest river globally and stretches from the northern reaches of Minnesota to its final destination in the Gulf of Mexico. That’s one big river!

John Fogerty penned this tune about a riverboat called Proud Mary that keeps “rollin’, rollin’, rollin’ on the river.” The insider scoop is that Proud Mary is shorthand for ‘Mary Jane,’ a term used for marijuana.

When you read the lyrics back that way, it sort of makes sense (all the references to “rolling” and “burning”).

CCR’s other big hit was ‘Bad Moon Rising’ which we feature on our songs for the moon list.

In this song, it’s Christmas time, and the river is frozen. The narrator feels terrible. She’s pushed someone any again, and now she wants to skate away on it.

If you were a fan of the TV show Ally McBeal you may also recognize it, as Robert Downey Jr. did an incredibly good version of it there.

We feature this brilliant song on our guilt playlist too.

The Orinoco River flows across South America, meandering through parts of Venezuela, Colombia, and Brazil. This song by new age musician Enya feels like you’re rolling and tumbling with the river with her soothing, angelic voice keeping you afloat.

This was her first hit en route to becoming Ireland’s best-selling solo artist.

‘Many Rivers to Cross’ – Jimmy Cliff

Rivers are physical barriers and often demarcate different areas, such as north and south London (either side of the River Thames).

In the song, rivers are used figuratively to represent challenges or obstacles. This song by Jimmy Cliff is an excellent example of such, where he acknowledges he’s got a way to go before he gets accepted (the song idea came to him as he crossed the English Channel, hence the line about “the white cliffs of Dover.”)

‘Ballad of Easy Rider’ – The Byrds

It’s a song about being free, using the free-flowing river “flowing to the sea” as a metaphor for their hippy idealism: “flow river flow, let your waters wash down, take me from this road to some other town.”

The soundtrack for the movie is an excellent album in its own right, with Steppenwolf’s ‘Born to Wild,’ The Band’s ‘The Weight,’ and Hendrix’s ‘If 6 Was 9’, among others.

Another type of river is a ‘river of booze.’ In this song, the narrator is drinking to forget “don’t let a memory talk to me” as he begs the whiskey river, “don’t run dry.”

Tragically, this “amber current” is the only thing to warm his broken heart after his woman has walked.

This pop standard from the 1920s was recorded for the musical Show Boat. The show was based on Edna Ferber’s novel that chronicled the lives of a group of traveling performers.

It has been covered by just about everyone, including Sammy Davis Jr, Frank Sinatra, Judy Garland, Ray Charles, Django Reinhardt, and The Beach Boys. However, many consider this version by Paul Robeson as the definitive version.

‘Cry Me a River’ – Justin Timberlake

Here’s one of the most famous songs about being cheated on by pop icon Justin Timberlake (it was allegedly Britney Spears who’d done the dirty.)

In the song, the girl seeks forgiveness. “Now you tell me you need me when you call me on the phone” he says. But he’s not having any of it. “The bridges were burned, now it’s your turn, to cry.”

Johnny Cash was aged four when he experienced the 1937 Mississippi flood first hand. He wrote this song about the ordeal (his family were forced to flee their home).

In this song, we hear those characteristic key changes that he became known for in songs like ‘Ring of Fire’ (featured in our list of songs about fire.)

How about a river of dreams? That’s the title of this spiritual song from hitmaker Billy Joel that supposedly came to him in his sleep (like many of his songs.)

There are some brilliant lyrics on display here and a superb vocal performance from Joel. He knows he’s searching for something that “can only be seen by the eyes of the blind.”

We feature this track on our list of dream songs.

The image of the Mississippi moon shining down on the river is incredibly evocative.

It’s one of the best songs about the moon you’ll hear.

‘Down to the River to Pray’ – Alison Krauss & Union Station

Rivers and religion often go hand in hand. They certainly do in this song, which features in the great Coen Brothers movie, Oh Brother Where Art Thou.

The Hudson River Maritime Museum calls it “a traditional American song variously described as a Christian folk hymn, an African-American spiritual, an Appalachian song, and a southern gospel song.”

In the song’s lyrics, singer Alison Krauss sings about going to the river banks to speak to God. It’s an incredibly moving piece of music, regardless of your religious leanings.

Ok, no list of river songs would be complete without Moon River, would it?

The lyrics by Johnny Mercer were the theme song (sung by Audrey Hepburn) in the movie Breakfast at Tiffany’s.

It refers to an actual place (Moon River is a river in Savannah, Georgia, where writer Mercer grew up).

‘Shenandoah’ – also known as ‘Oh Shenandoah’ or ‘Across The Wide Missouri’ – is a traditional American folk song that started life as a sea shanty in the mid-1800s.

It was popular among sailors, loggers, and flatboat men who would sing it to ease their loneliness while carrying goods (often fur) along the Missouri River.

‘River (Take Me Along)’ – Bill Staines

Here’s a gorgeous song by Bill Staines, an American folk musician and singer-songwriter from New Hampshire. Thanks to Paul Lap from The Netherlands who suggested this in the comments below 🙂