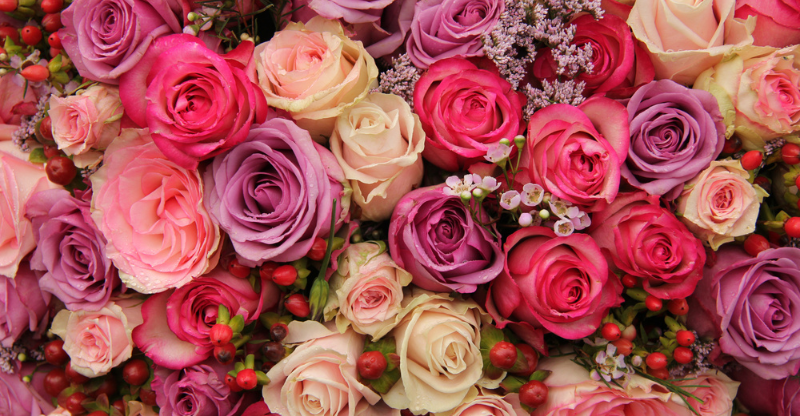 Roses represent so many different things in life. From budding romances to the passing of loved ones, the delicate flower has become important in cultures everywhere.

This diverse list explores crossover hits and classic singles blooming with rose imagery, metaphors, and meaning. Take a listen below to songs about roses.

French singer Édith Piaf’s most popular song, ‘La vie en rose’ debuted in 1945. The song’s release introduced her to international markets, including a wide range of American listeners. The song’s title eludes to the saying involving living life through rose-colored glasses. The title’s literal translation is, “Life is pink.”

Related: Hear a cover of this song on our list of songs about new love.

Every Rose Has Its Thorn – Guns N Roses

Brett Michael’s legendary crossover hit was penned in a laundromat after he realized his girlfriend was cheating on him. The Guns N Roses frontman has explained in interviews before the rose in the song represents his budding career, and the thorn represents the romantic relationship he’d have to leave behind due to infidelity.

Originally written by songwriter Amanda McBroom, Bette Midler commercialized ‘The Rose’ when she released it in 1979. She recorded it for her film project by the same name she starred in. The tune plays during the movie’s closing credits. Other popular artists, including country star Conway Twitty, covered the tune after its initial release.

Love is a Rose – Neil Young

Though Neil Young originally recorded his song ‘Love is a Rose’ in 1974, it wouldn’t debut on a compilation album until years later, in 1977. Because of the delay, artist Linda Ronstadt is often credited with the tune because she released a faster version before Young’s version debuted. The song, like much of Young’s work during this time, deals with his split from Carrie Snodgrass, the mother of his first child.

‘Mother Rose’ was included in her 2003 album Trampin’, and the entire project has a maternal theme. Patti Smith’s mother passed away in 2002, and she used her writing to help her get through the grieving process. The tune contains a portion of a poem towards the end Patti wrote and recited at her mother’s memorial service.

Released as the lead single off their album Signed and Sealed in Blood, “Celtic” punk rockers the Dropkick Murphys sing about their tattoos in ‘Rose Tattoo.’ The stories the tattoos tell deal with everything from family legacy and growing up in Boston to learning about bravery and sacrifice. The band recorded a version of the song for a benefit after the tragic Boston Marathon bombing, and Bruce Springsteen sat in on vocals.

A Rose By Any Name – Blondie

The Gossip band leader Beth Ditto provided guest vocals for this 2013 Blondie single release. ‘A Rose By Any Name’ refers to Shakespeare’s play Romeo and Juliet, in which the two lovers discuss “What’s in a name? that which we call a rose.” The literary tune was written by Blondie bandmate Matt Katz-Bohen and his wife, Laurel.

Related: Check out the Romeo and Juliet soundtrack.

DJ group, The Chainsmokers, released ‘Roses’ on their debut EP Bouquet in 2015. The song’s title isn’t anywhere to be found in the lyrics, but it’s a reference to the guest vocalist, Philadelphia’s own Rozes. The romantic tune features the songstress singing about her intense love for her boyfriend. The entire song was written and recorded in only about eight hours.

Kiss from a Rose – Seal

Fans have long pondered what Seal’s mega-hit is truly about. Some claim it’s about drug use, while others say it’s about a soul’s experience of being in love. The pop star wrote ‘Kiss from a Rose’ before he became famous. He’s mentioned in interviews that when he wrote it in ’88, he felt very free, and that “liberation” came out in his song.

Related: Frolic through flower fields with this list of songs about flowers.

Penned during a jam session when Red Hot Chili Peppers bandmates felt particularly inspired, the song was originally going to be called ‘Disco Sabbath.’ The bass line and other instrumentation were born from band members hiking and fantasizing about stumbling upon the biggest disco party they’ve ever seen. ‘Monarchy of Roses’ appears on their 2011 album I’m With You.

A popular single in both the UK and America after its debut, Outkast’s ‘Roses’ was first released in March 2004. The track features an appearance by artist Big Boi. The music video for the song features a star-studded cast, including appearances by Katt Williams and Paula Abdul. Popular musicals like West Side Story and Grease are also referenced in the video.

Related: Head over to our list of songs from the Grease soundtrack.

“There’s nothing but screams in the field of dreams.” Music critics have compared Roger Waters’ “sinister” ‘Smell the Roses’ to Pink Floyd’s dreamlike sound. As a cofounding member of the iconic band, this comparison is warranted. Like much of his solo work, Waters focuses on anti-war themes in this song. It appears on his 2017 album Is This The Life We Really Want?

“English rose, a crown of thorns. Don’t get me down.” A song that can be left open to interpretation, the lyrics for ‘English Rose’ detail a duality between a beautiful woman who can also cause a man a lot of emotional pain. The protagonist waits for her at the beginning of the song and then recalls memories involving his “English Rose” for the listener. By the end, their tumultuous relationship is “growing wild.”

Algerian artist Cheb Mami guest appears on ‘Desert Rose.’ The song features a collaborative lyrical effort by both Sting and Mami. Much of the lyrics were written separately, but when the artists compared notes, they realized the theme of “longing” was present in all the lyrics. The duet performed the song and received much applause at the Grammys in 2000.

This rare reggae-inspired tune by artist Pete Doherty finds him singing about “English Roses,” who are particularly charming. He’s publicly mentioned that he took a very honest approach to the song’s writing, even down to the names mentioned. Blur guitarist Graham Coxon recorded instrumentation for the tune and much of the album. The song appears on Doherty’s 2009 effort, Grace/Wastelands.

Yellow and Rose’ is a historically-driven song rich with story-telling and imagery. Within the lyrics, songwriter James Taylor tells the story of the hundreds of thousands of British “criminals” who were sent away to Australia by the British government in the 1800s. While the government thought they were sending these outcasts to certain death, Taylor tells their story of “rebirth” once they make it to the untamed lands.

Related: You can find this song on our list of songs about historical events.

For the Roses – Joni Mitchell

A deeply personal tune written at a transformative time in Joni Mitchell’s life, she was inspired to write ‘For the Roses’ after a stay in rural Canada. After growing tired of the fickle nature of the music industry, she retreated for a while to her “sanctuary” in the woods. The song’s title references the Kentucky Derby. She likened herself to a strong horse who’s won the race; as she gets older, the people in charge don’t have much use for her.

Related: Jam to our playlist of horses music.

Rose of My Heart – Johnny Cash

“You are the rose of my heart. You are the love of my life.” Originally written by Hugh Moffatt, ‘Rose of My Heart’ was first released by artist Johnny Rodriguez in the mid-’80s. Many artists have gone on to cover the tune, and outlaw country legend Johnny Cash released it in his 2006 effort, American V: A Hundred Highways.

A Rose is Still a Rose – Aretha Franklin

Pop-soul singer Lauryn Hill wrote ‘A Rose is Still a Rose’ and produced the album by the same name for icon Aretha Franklin in 1998. The poignant song is sung from a mother’s perspective, giving gentle advice to her daughter, who’s come out of a string of bad romances. The mother tells the daughter that despite it all, she’s still just like a rose.