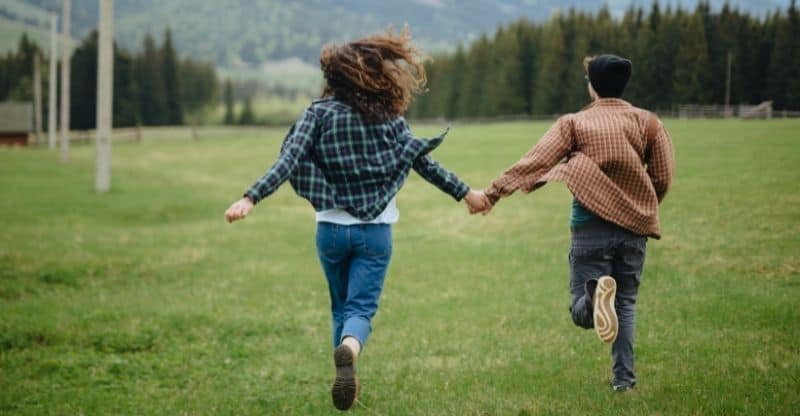 The desire to run away – whether that be from negative emotions, from a partner, a parent, or whatever is bringing you down – is one of the most human feelings a person could have.

No surprise then that many artists have written and sung about the subject.

So, without further ado, here’s our pick of some of the best songs about running away ever written.

Here’s a melodic, powerful, and overall beautiful ballad. Rather than focusing on wanting to run away, as many songs do, the protagonists of this song decide not to run anymore; instead, they decide to face the future with a recently rediscovered loved one by their side. This track also serves as a reminder of the importance of holding on to oneself; because, as Beyoncé sings, “If I lose myself, I lose it all.”

A song that’s very Springsteen-esque in its telling of a story of a young, slightly dysfunctional couple trying to make it in a small town – but yearning for change (“she says she might just runaway somewhere else, some place good”). The protagonist is adamant he’s going to fend for his wife and child but knows he has a lot to contend with, especially his own issues with commitment and responsibility (“I got the tendency to slip when the nights get wild, it’s in my blood”).

Relationships – in the early days at least – are often like a game of cards. Both parties hold their hand close to their chest, and neither reveals their true feelings for fear of rejection. In this song by pop maestros Maroon 5, the singer has a last-ditch attempt to save a relationship that’s on the rocks. He has “finally found the words to say,” but his words fall on deaf ears (“I can’t tell you, if you turn around and run away, run away.”)

Running Away – Sly & The Family Stone

This is another interesting track in that it looks at the subject’s desire to run away from a somewhat critical outside perspective. It uses the ‘running away’ theme as a means of explaining how the song’s protagonist is running from their life and avoiding the cold truth of reality. Some listeners interpret the song as being about someone suffering from depression, which is another interesting angle to look at. The song is not the most concrete, so multiple meanings can be applied to it, which makes it a very special piece of art.

This is a funky yet heartbreaking Ed Sheeran track. It describes the protagonist’s desire to run away from a troublesome household with a father battling alcoholism. There is also a brief mention that “mama was the same,” though it isn’t immediately clear if Sheeran is comparing the mother to the father or to the song’s subject. In ‘Runaway,’ the use of the running away theme is a bit more concrete than in some of the other songs on this list. This track was co-written and co-produced by Pharrell Williams and features his signature poppy groove.

‘Take the Money and Run’ uses the running away theme to tell a somewhat tongue-in-cheek story of two lovers who go on the run after committing a crime. They find themselves being pursued by a detective throughout the song. This cleanly produced classic rock song was said to have been inspired by Steve Miller’s long childhood road trips with his parents. It is also interesting to note that it’s the first song that Miller allowed a rap group to sample after many prior requests.

While this rousing rock song is said to be a confession of love from Bruce Springsteen to a romantic interest, Springsteen has also described it as a song about two young people escaping with only their love to rely on in order to find a new life full of meaning and community. This track also serves as an anthem celebrating youth and the desire to experience life while one is young. This is another track where the running away theme is quite concrete, yet is still used in a very creative, powerful, and relatable way.

Related: this track appears on our playlist of road trip songs.

This modern pop/hip-hop fusion song discusses running away from two subjects’ perspectives without directly mentioning running away. Instead, the listener hears Selena Gomez sing “Is there a place where I can hide away?” and describe what sounds like a past escape from everyday struggles; specifically, the ones that public figures must face. Gomez and Kid Cudi hope to find a sweeter place free of worries to run away to; that place is the main focus of the entire track.

Run to You – Bryan Adams

‘Run to You’ discusses running away in the form of the subject running off to meet with a secret lover when things get rough with his significant other. There is an interesting story behind this track, in that Bryan Adams only recorded it himself after it was turned down by other artists. It ended up being the first single on Adams’ album Reckless and a hit, reaching number six on the Billboard Hot 100 in 1984.

Here’s a very political song. It discusses running in the form of carrying on with one’s life through uncertainty and tumultuous political landscapes. The song reads like a story about the protagonist, who is born in the 1960s and lives through the changes and battling ideals that shaped the decade. While Sheryl Crow has said that the song is not about her life, she has also stated that she related to some elements of it, and many listeners think of the protagonist’s characteristics as being very reminiscent of Crow.

This track discusses how it is impossible to run away from oneself, no matter how hard you try or what you try to do to distract yourself from the mistakes you’ve made. Bob Marley sings of the importance of facing the things you’ve done wrong rather than living with the consequences of sweeping them under the rug. This song is especially relevant in today’s world, where many people turn to technology and similar modern distractions rather than facing conflicts in their daily lives and the world around them to find positive solutions that improve everyone’s lives.

‘Runaway’ tells the story of a young girl who feels ignored at home and runs away in hopes of finding a better life and love. It is another track that uses running away as a broad theme to discuss a particular, concrete story about the troubles faced by youth living on the street. This track became a popular hard rock song and was the first hit for Bon Jovi.

This track is a reimagined cover of Tracy Chapman’s original version, utilizing tropical house vibes to create a modern dance song. It has elements that are reminiscent of some other songs on this list in that it discusses leaving with a significant other in pursuit of a better life while escaping an alcoholic father. Rather than mentioning running away directly, it uses the imagery of leaving in a fast car to symbolize starting a new life in a new place.

Related: you can hear the original Tracy Chapman version on our songs about cars playlist.

In this country classic, George Strait asks his lover to run to him no matter what it takes. Most of the song is spent suggesting various means of travel that can be taken to get to him. The song was a minor crossover hit on the Billboard charts and reached as high as Number Two on the country chart in late 2001 and early 2002. This is another song that discusses running to someone, rather than running away from a person or a situation.

Stand Up and Run – Billy Talent

Here is a unique rock track that discusses running to a loved one – rather than running away from something negative – although its title and slight play on words may have listeners thinking otherwise to begin with. ‘Stand Up and Run’ was a successful hit in Canada after its release in February 2013, remaining on the Billboard Canadian Rock Chart’s Number One spot for six weeks straight.

Here’s another track that uses the running away theme to discuss the struggles of living a disastrous family life and wanting to escape it. In this case, the song tells the story of three young girls and their separate but similar struggles at home. The song ends with a familiar “let’s run away together” theme. This song discusses broken families and their impact on children and their perceptions.

Come Fly With Me – Frank Sinatra

This Frank Sinatra classic discusses “flying away” rather than “running away,” and has a much lighter theme than many other tracks on this list. The track played off of Sinatra’s public image as a jet-setter and was co-written by Jimmy Van Heusen, who was a passionate pilot who served as a test pilot during World War II. ‘Come Fly With Me’ has been featured prominently in the media since its release in 1958 and has also been covered several times.

Related: this song appears on our playlist of songs about flying.

Birdy turns the running away theme into something new, claiming “My mind is a runaway, and I find it’s too hard to breathe.” The song seems to be about people growing apart who hope to fit back together someday. However, Birdy has explained the song very differently. She told The Sun that it tells of a girl who is torn away from her parents to become a geisha. She learns how to be strong in an unfamiliar world. No matter how you interpret the lyrics, it’s easy to see that Birdy has made beautiful use of running away as a concept.

This song is very different from others on this list in that it is a lighthearted, classic Christmas track. It uses the running theme to update the story of Rudolph the Red-Nosed Reindeer, as Chuck Berry implores Rudolph to hurry up so Santa stays on schedule. This track turns the Rudolph story into something more fun and modern, with a bit of a whimsical, classic rock and roll attitude.

I Run To You – Lady Antebellum

This Lady A track is brilliant in that it plays on the word ‘run’ in multiple ways—from running from negative behaviors and events to running one’s own life—and ends up circling back to the classic theme of running to a loved one for support and a better life. ‘I Run To You’ was a country hit that received CMA’s Single of The Year Award in 2009.

You Keep Running Away – The Four Tops

This song tells a classic tale of an on-again/off-again, heartbreaking romantic interest who keeps running away. It’s another song that uses the running away theme in a very straightforward way while presenting a relatable story of romantic woes.

This classic country song from Merle Haggard and The Strangers tells the story of a protagonist who “was born the runnin’ kind.” It discusses how important freedom and the ability to roam freely has been to the protagonist since very early childhood in order to have a happy and fulfilling life. This song uses the running away theme in a very compelling way.