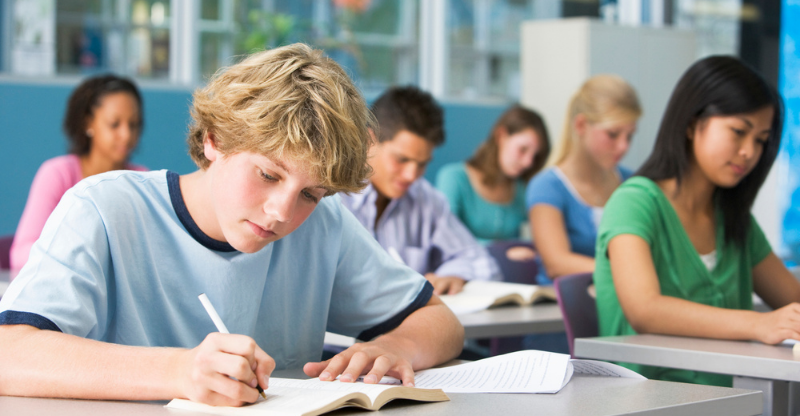 Love it or hate it, school is a part of almost everyone’s life at some point.

Sometimes, a good song about education can make it easier to deal with the realities of school or memories – happy or sad – of childhood days spent with teachers and classmates. Here are some of the most famous and popular songs about school that you may want to check out.

Just don’t blame us when you get caught with headphones in class!

This track and the album it appears on were among Alice Cooper’s most commercially successful releases. This song’s title and lyrics were inspired by a tagline from the Bowery Boys movies. It’s not about school kids starting their vacation as much as living life on your own carefree terms without apology, even if others may view your actions as questionable or unusual.

Related: Enjoy your summer vacation with these summer time songs.

Chuck Berry sings of 1950s school life in this classic. Berry wrote the song when he was 30, but the subject matter appealed to the teenage audience that rock music was targeting at the time. His lyrics talk about subject matters such as school romance and the drudgery of school days that not only spoke to his younger audience at the time but are still relevant in the present day.

What Did You Learn in School Today? – Pete Seeger and Tom Paxton

This song reminds listeners not to believe everything authority figures say or take their advice too seriously. Each verse mocks the lessons children were being taught during the time of the song’s release. There’s a distinct political and anti-war tone to the lyrics, criticizing the pro-war beliefs that kids are taught at school.

The Ramones wrote this track as the title song for a film of the same name. In the movie, a student writes this in a songwriting class but is blocked by the administration from getting it to the Ramones. As a result, she stages a rock rebellion against the school.

Related: Here are some more great songs about power and authority.

Be True to Your School – The Beach Boys

This teenager-focused song is all about having pride in your school. Parts of the track incorporated the fight song from the Beach Boys’ high school, Hawthorne High School in California. The girl group, The Honeys, sing as the cheerleaders in the song. The popular single version differs from the version that appears on the album Little Deuce Coupe which was released before the single.

School is Out – Regina Spektor

Regina Spektor uses symbolism related to the end of school and the beginning of summer to evoke feelings of loneliness and entrapment in this piece. It could be seen as describing school days in a bittersweet way, where the narrator misses youthful days in class but not the loneliness of being an outcast.

Related: See our playlist of songs about isolation.

This is a somewhat bitter remembrance of Loudon Wainwright III’s years spent attending the all-boy school St. Andrew’s in Delaware, which is also the subject of the Robin Williams film Dead Poets Society. The artist refers to himself as a rebel on the fringe and a preppy, thoughtful writer who wasn’t one of the cool kids.

MC5’s track about high schoolers seems to paint teenagers in a fun-loving and rambunctious light. The song also seems to think that young people need to be left to their own devices and make their own choices with lyrics such as “you better let them have their way.” It’s a lyrically simple track that still has complexity.

Related: Find more great songs on our list of best songs about teenagers.

Jerry Lee Lewis wrote this song for the film’s soundtrack by the same name. It’s all about having fun at a high school dance and getting your thrills there. It’s one of Lewis’s hits that he wrote himself. While the film had a sequel, Lewis did not write a theme song for it.

Related: Check out our playlist of dancing songs.

What I Go to School For – Jonas Brothers

This track shows a high school freshman boy’s crush on a senior girl in a humorous light, pointing out laughable age-related contrasts with lines such as “I’ll show her a world where we belong, but she’ll have to drive us to the prom.” As the title suggests, this hopeless crush is why the protagonist goes to school. This song was the first track on the Jonas Brothers’ debut album.

Related: Falling for someone? Listen to these songs about having a crush.

Back to School (Mini Maggit) – Deftones

In this song, the Deftones use school and taking notes as lyrical metaphors for other artists copying their sound and genre. The band helped create the rap-metal genre, which rose to popularity after its inception. However, the song also serves as a critique of the cliques that form in schools.

This song was written for the musical Grease on Broadway in 1971, but Frankie Avalon popularized it in the film version in 1978. In the film, Avalon appears as a teenage angel during a dream-like sequence and tells a beauty school dropout named Frenchy to go to high school again.

Related: Follow your dreams with this playlist of songs about dreams.

This track tells a tale of a real-life legal situation at Bard College in 1969. Band members and their girlfriends were involved in the situation. It’s referred to as the “Old School” in the lyrics. There are other references to people, places, and things related to the campus and its home of Annandale, New York.

Kanye West tells listeners about his journey of quitting school to pursue music in this track. It’s a celebratory song about West’s successes as a musician that also questions how practical higher education is when one wants to learn things. The song samples Aretha Franklin’s track ‘Spirit in the Dark.’

Related: Celebrate your success with these winner songs.

The protagonist of this track enjoys being 18 and looks forward to being done with high school. He also seems to be changing his scene, even though he gained a bad reputation in school. The song criticizes education and shows listeners that you can turn your life around even if you’ve made mistakes or goofed off in the past.

Related: Big day coming up? Check out these songs about turning 18.

Too Cool for School – Fountains of Wayne

This track appears on the Scary Movie soundtrack and plays at the film’s end. It talks about a seemingly selfish guy who might be a manipulative heartbreaker. He thinks he’s cool and likes to enjoy the nightlife. He also seems to keep his feelings to himself and is a loner—but one who seems to garner respect from others.

Related: We’re happy to share our playlist of songs about being selfish.

Parts of this lyrically clever track are hard to interpret, but it does seem to talk about both the pains and the advantages of being a schoolteacher in the 1970s when it was released. There are some darker elements at play that are better evaluated by the individual listener, as well.

Related: Hear songs about teachers and other jobs on our list of profession songs.