Fall Into These 25 Songs about September 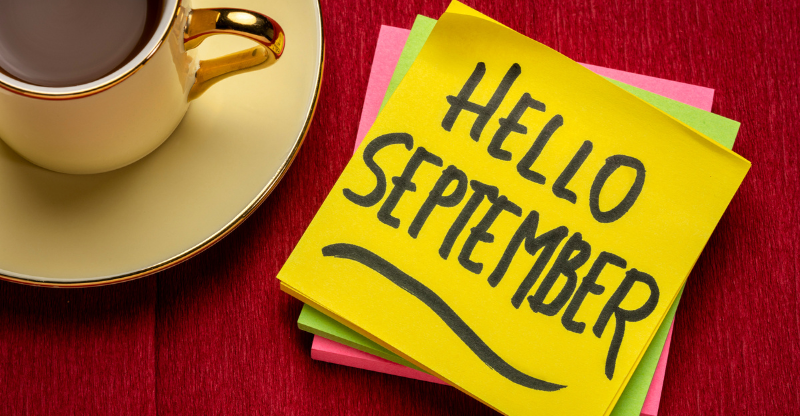 September is an interesting month. It starts out as summer and ends in autumn. It’s a symbol of change and new beginnings for many since the weather moves from hot to cool, and many schools are back in session.

If you’ve ever wanted to celebrate and reflect on this intriguing month, there’s no better way than listening to music about it. Here are some of the most well-known songs about September for you to explore.

Green Day’s lead singer, Billie Joe Armstrong, wrote this song about his father, who died of cancer on September 1, 1982. The lyrics tell a universal story of wanting to sleep through a painful time in life. Armstrong waited to release the song after it was written, as he was too emotional to record it.

Related: This song features on our list of the best autumn songs.

Frank Sinatra sings of the passage of time in this song, which has been performed by a range of notable artists over the years, such as Willie Nelson. Time seems to move slowly, but the colder months move quickly, according to the lyrics. Sinatra realizes the preciousness of his short time with a special someone and wants to spend every moment together.

Related: Hurry up and listen to these songs about time running out!

This song was inspired by a protest, but the lyric “the 21st night of September” came from the birthdate of Maurice White’s son, Kahbran. The date has become significant for many listeners who have gotten married on that day; the stock market also tends to go up on September 21.

Related: Dance along with the greatest party songs.

September When It Comes – Johnny Cash and Rosanne Cash

‘September When It Comes’ was the last duet between Rosanne Cash and her father, Johnny Cash; the latter died the same year the song was released. Rosanne sings of growing up, while Johnny sings of growing old and accepting the changes that come with it.

Related: Here are the best songs about growing old.

The narrator here has deep feelings of love for someone but knows that the relationship will never work out for the two of them. He makes it clear that neither meant for it to go this far: “And I didn’t mean to fall in love, but I did, and you didn’t mean to love me back.”

Related: Check out our playlist of music about not wanting to fall in love.

The two members of a couple that serves as the subjects of this song have gotten back together after taking a break. Neil Diamond hopes that the memories they share are strong enough for the relationship to work once more. One person claimed that this track was tied to the disappearance of a nursing student named Holly Bobo, but the connection they supposedly drew from the lyrics was unclear.

James Arthur sings of a romantic relationship in this track. He tells the story of how their relationship grew in detail and declares that he will always love his girlfriend. Then-girlfriend Jessica Grist likely inspired the lyrics, but the long-term pair broke up before the song was released.

This track explores the pain that comes when a loved one loses their life to cancer. It was most likely written about Ryan Adam’s own girlfriend who battled the disease: “They carved your name into a stone, and then they put it in the ground. I run my fingers through the grooves when no one’s around.”

Fiona Apple wrote this song about a breakup with an ex-boyfriend who dated her sister’s best friend before he got together with Apple herself. Apple had said that the two actually had a nice conversation about the track, which she released when she was only 18.

This track talks about a childhood memory the band shared from Athens, Georgia, which the title clearly refers to. They went swimming in a water hole with a total of 30 kids. The song was written by R.E.M.’s bassist, Mike Mills, who also played piano for the piece.

Related: Splash over to our list of swimming songs.

Daughtry seems to explore nostalgia for the past and realize that you must move forward to find a better life in this piece. The song talks about Chris Daughtry’s childhood in Lasker, North Carolina. The album that ‘September’ appears on draws its title from a lyric within the song, which Chris Daughtry and Josh Steely wrote together.

Xavier Rudd sings of the aftermath of the 9/11 terrorist attacks in New York City. It’s easy for the listener to see how life has changed for everyone one day after the harrowing event. The lyrics explore the hatred that allowed this tragedy to occur and the many lives stolen that day.

Related: See our playlist of songs about tragic events.

It Might as Well Rain Until September – Carole King

Carole King recorded the demo of this track, which became a hit for her even though it was written for Bobby Vee, who also released his own version. This became King’s first commercial hit as an artist rather than a songwriter. The lyrics find King feeling perpetually sad because she has to live without her lover in her life.

Here’s a track that explores the grief that comes with losing someone. The protagonist is having a rough summer but is hopeful that a new start will make her life better in September. It also shows how fall and its changes can clean the slate for many who are hurting.

Related: Start over with the best songs about a new life.

September When I First Met You – Barry White

Barry White reminisces on the day he met the woman he loves in this piece. He asks if she remembers the day too, as it is a wonderful and happy memory for him where they held hands and embraced one another.

This song seems to tackle the topic of long-distance relationships or the end of a relationship before one-half of the couple moves. The pair in this song has one last night together that they cherish. They wish this last day together would last and that they could cheat time to make it continue.

The protagonist of this song has been hurt in love and life. Even so, he hopes that September will bring him fresh happiness and new love. This classic tune reminds listeners that hope is never lost and happiness can return to life again.

Related: Need a smile? Here are the best happiness songs.

See You in September – The Happenings

The narrator here is seeing a love interest off at the train station. It seems his girlfriend is going away for summer vacation. He looks forward to seeing her in the fall but feels sad about her leaving anyway.

Related: These songs about vacations will make you want to book a flight!

Rise Against wrote this song to provide a message of hope that also serves as a criticism of the bullying of gay teenagers. It was an important message coming from a rock band in a genre known for its aggressive tendencies. The song encourages listeners not to give up when life is painful.

Related: Keep going and enjoy the best songs about not giving up on life.

Big Star performed this track in 1974 before The Bangles covered it in 1988. The original—inspired by 1960s British pop—wasn’t much of a hit for the group. However, Rolling Stone did list it as one of the Top 500 Songs of All Time. It’s about falling in and out of love with girls in September.

Melissa Etheridge seems to be in deep pain after losing love on this track. She wants the brutal September weather to rain on her, probably because she will feel some sort of emotional release as a result. Life has felt different to her since the breakup.

Related: Broken heart? Here is our break up songs playlist.

This song finds JP Cooper looking back on a teenage romance as an adult. Even though he can now see the relationship with a more sobered look, he still misses the girlfriend and has feelings for her. He misses simpler times and wonders what his past love is up to.

Here’s a jazz song from Windows that features Al Stewart, appearing on an album of the same name. This song explores the past, the present, dreams, and the roles people play in each other’s lives somewhat abstractly.

Like many songs that focus on September, ‘September Grass’ looks at the passing of seasons and time through the eyes of someone spending time with a loved one. The protagonist is enjoying the current season’s changes, as he can relax comfortably outside with someone special.

The September of My Years – Frank Sinatra

This Frank Sinatra piece appears on the celebrated singer’s 1965 album of the same name and finds Sinatra singing about nostalgia. Sinatra recorded this popular, Grammy-nominated track three times, while Bob Dylan covered it in 2017 for the album Triplicate.