18 Best Songs about Shoes and Footwear 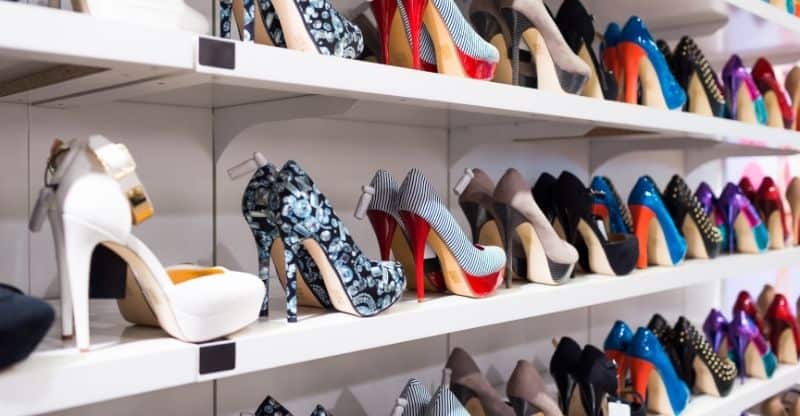 Shoes aren’t the first thing you’d expect to find talked about in songs, but as you’re about to see in this list of shoe songs, they’re pretty common! Of course, songwriters typically use shoes (or boots, high heels, etc.) as metaphors for something else (e.g. success.)

So without further ado, let’s try out some of the best songs about shoes and see if they’re a good fit 🙂

Picture this: you’re out dancing, you spot someone beautiful, and you want to say hello. But you’re too afraid to do it. That’s what this song is about. The singer keeps telling the “you” in the song that it’s crazy to be shy. Telling them “hello” isn’t that big of a deal! This song can be used as a pep talk before you gather enough courage to talk to someone you have a crush on.

This song sounds like a love song on the surface, but the words allude to a deeper meaning. George Harrison wrote this song and said he wanted to address “the duality of things.” The song mentions right and wrong, short and long, up and down, and smile and frown, pointing out that opposites typically go together. “Stepping out of this old brown shoe” may be referring to letting go of material possessions and living in the moment.

Blue suede shoes were once seen as a luxury item in the southern United States, so they weren’t something you wanted to get scuffed up! This song is a comedic warning that essentially says, “don’t you dare touch my shoes!” Carl Perkins wrote the song after hearing someone talk about their blue suede shoes all night. Perkins was set to perform it on TV, but a car accident changed the plans, and that’s how Elvis’s version became so popular.

Diamonds on the Soles of Her Shoes – Paul Simon

This song talks about a rich woman dating a man below her social class. The “diamonds on the soles of her shoes” have multiple interpretations, but it seems like she’s trying to downplay her wealth as she dates the poor man so others don’t judge them too harshly. The woman accuses the man of taking her for granted, so he changes his appearance the best he can to appease her and make them look more equal. Some assume the diamonds are simply a metaphor for love since the man has diamonds at the end of the song.

This song is most likely based on the fairy tale The Red Shoes by Hans Christian Andersen, where a spoiled girl ends up in a pair of red shoes that won’t stop dancing, even after her feet are amputated. The shoes stop dancing when the girl prays to God. Kate Bush’s song also mentions God, making it likely that the story is the inspiration. Many people (who may be unaware of the fairy tale) interpret the song to be about the music industry or work in general that demands all of your attention forever.

If you don’t know Paolo Nutini, you’re in for a treat – his voice is something else. ‘New Shoes’ represent positivity or a new perspective that allows you to look at the bright side even when things aren’t great.

‘Crocodile Shoes’ was written for a drama series of the same title on the BBC in the ’90s. It was about a factory worker who wrote songs on the side and hoped to make it big someday. Crocodile shoes are luxury shoes that are made with crocodile skin. Unfortunately, the man singing the song is likely missing his family from working all the time, leaving him with nobody but his fancy pair of shoes.

In These Shoes? – Kirsty MacColl

This is a playful song where the singer travels to new places and meets new men and gets a little flirtatious. Her shoes must be something to behold if she doesn’t want to ruin them going up a mountain top or if the man wouldn’t survive them after she walks on his spine. The Spanish portion of the song roughly translates to, “Doesn’t like to walk, can’t ride a horse, how can you dance, it’s a scandal.” It suggests the singer just wants to stay put and have a good time.

‘My Adidas’ came out in 1986 before Adidas was cool, but it changed society’s view of the brand. The song’s purpose was to show how far the group had come, proving that people who grew up in poor communities could break out and become rich and famous. Adidas executives gave Run DMC a line of footwear after hearing the song, and shortly after, it seemed like everyone who loved hip-hop loved Adidas, too.

This song was written for the film Footloose starring Kevin Bacon and has been a popular song since it came out. The song is all about relaxing and having fun after feeling defeated by long hours at work. Everyone knows what it’s like to desperately need a break, so this song is sure to stick around for generations to come, even though some people may argue that it’s a bit overused in social events that require dancing. It sounds like they need to “kick off the Sunday shoes!”

Sometimes you like someone so much that you just want to dance with them, and that’s what this song is all about. “Boogie shoes” aren’t referring to a specific type of shoe, just anything you’d like to get down in on the dance floor. If you’re trying to impress someone, it’s likely going to be your nicest pair. This song came out in 1975 but didn’t become popular until two years later when it was included on the Saturday Night Fever soundtrack, one of the biggest selling soundtracks ever.

These Boots are Made for Walkin’ – Nancy Sinatra

When this song came out, Nancy Sinatra became more popular than her father, the great Frank Sinatra. The song is about a woman who has put up with a misbehaving partner for far too long and is ready to throw him to the curb sooner than later. The song alludes to the idea that her partner is having an affair when she says that “someone else is getting all your best,” which is a great reason to strap on the boots and start walking! Jessica Simpson also did a cover of it in 2005 for the remake of The Dukes of Hazzard.

Finding an appropriate work-life balance is necessary, and Kenny Chesney dreams of the ultimate day off in this beachy song. The song isn’t necessarily saying to relax all the time, but it does say that you should enjoy it to the full extent when you finally have the time to relax. Kenny fantasizes about sitting on the beach without a care in the world. What better way is there to spend a day off?!

‘Shoes’ equates men to shoes and explains the similarities between the two, claiming that you “can never have too many of ’em.” The song is mostly poking fun at men, referring to them as “loafers” or hard to find. The song assumes that every woman has a closet full of shoes which suggests that they also have a list of men to choose from. The song was written for Desperate Housewives and was released on the soundtrack in 2005, but did well outside of the show too.

Sand In My Shoes – Dido

Life doesn’t always feel the same when you return home from an extended vacation, especially if you meet someone new. Dido pines for the person she met while she was away and wants to recreate what she had, or at least forget about it, but the sand still in her shoes makes it difficult. You could also interpret the “you” in this song as the vacation itself rather than a person. That would mean she desperately wants to put her sandals back on and run to the beach.

This song is about leaving someone who makes you feel inferior because you know you can do better. She got the haircut she knew he wouldn’t like, bought new shoes, got a new job, and got out of there. The song shows that the man in the relationship wasn’t supportive of the woman and talked down to her and made her feel bad about herself. But, she decided to take her life into her own hands and prove him wrong. It’s an empowering song meant to encourage people to leave those who bring you down.

There’s a Hole in My Shoes – Neil

‘There’s a Hole in My Shoes’ was performed by Neil (Nigel Planer) on The Young Ones in 1987. The song is mainly spoken word and has very little meaning to it. It describes a dream or a drug-induced experience. Neil was a hippie character, so it’s likely the latter. The song was initially performed by Traffic in the ’60s. It was written by Dave Mason in a sober state – he simply wrote whatever came to mind. Traffic’s version is different than Neil’s, so each song provides a different experience.

Adam Ant was tired of dealing with the press, so he wrote this song about how they bothered him. His true personality didn’t match his loud on-stage personality, so the press often questioned him about what he did with his life. He didn’t drink or smoke at the time, which many people found hard to believe. What are you when you’re subdued and have good character? You’re a ‘Goody Two Shoes,’ and people tend to see you as pretentious.