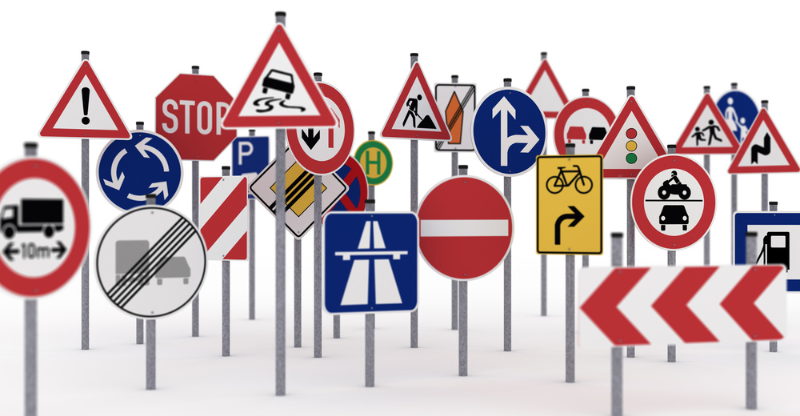 We rely on signs to help us navigate the world around us, whether they’re astrological or concrete.

From checking price signage at a store to obeying a traffic sign, you probably rely on these helpers to figure out what to do from day to day. It seems that music artists appreciate signs, too, as they’ve used them as subjects and symbols in numerous famous songs.

Learn about some of the best songs about signs.

This is a soul classic that charted four times—once when Brenton Wood performed the original version and three more times through cover releases. The male narrator begs a female love interest only to give him a sign of her affections if it is genuine and if she will be sure to be there for him through thick and thin.

Arcade Fire has not confirmed which of the two accepted meanings of this song are accurate, but one of them certainly is. The lyrics seem to either be about the desperation involved when looking for meaning in a life that is mostly designed to be without meaning or instead about the joy of partying. It could also be a combination of the two.

Related: Check out our list of songs about living life.

Here’s a somber track from Prince about the darkest highlights from the news and politics of the United States during its release in 1987, including the explosion of The Challenger Space Shuttle. The title was inspired by a magazine by the Seventh-day Adventists; Prince was raised with parents who followed the religion’s beliefs.

Related: Listen to similar songs on our list of end of the world songs.

The female protagonist of this track realizes that her love interest isn’t good for her, but she still seems to have feelings for him as they try to navigate the shaky future of their relationship. She’s seen a sign about where they’re headed but isn’t sure how to proceed. This remains Arista Records’ most successful Billboard-charting single.

This Foo Fighters track paints a picture of a superstitious male protagonist who is confident and sure about one thing: he will protect and care for the woman he loves if he wants and needs her to. The song highlights a variety of common superstitious beliefs, such as “walking under ladders.”

Related: Are you a little superstitious? See our magic songs list.

‘Signs’ is a cover of The Five Man Electrical Band’s classic song about the dark side of the signs we see in society. The signs control people’s lives, telling them to “(d)o this, don’t do that.” This cover was released in November 1990 on the album Five Man Acoustical Jam, which seems to be inspired by the original performers’ band name and contains several prominent cover tracks. The song was a hit for both groups.

Drake recorded this catchy tune for Louis Vuitton’s 2018 spring and summer men’s fashion show at Paris Fashion Week in 2017. It seems to be about a man living a fast life who needs to slow down, evaluate his life, and stop partying as much as he has been.

This track takes a critical eye toward man-made signs, both because they diminish the beauty and purity of nature and because they often serve to control the more free-thinking or disenfranchised members of society. It served as an anthem to those without power or money, especially the young people of the time. Tesla covered the song in 1990 and found success with it, as did The Five Man Electrical Band.

Related: Here are the best songs about injustice.

‘Warning Signs’ was inspired by the true-life emotional moment when Band of Horses lead singer Ben Bridwell lost his voice while performing on stage and cried in public at the Sydney Opera House. The song captures the darker emotions of life and the hopelessness that certain events trigger in one’s mind and heart.

This collaboration fuses multiple musical styles for a feel-good piece that highlights a romance’s promising and happy beginnings, although more somber warnings to not take a woman for granted and possibly not deserving her are sprinkled in to even out the mood. The song interpolates parts of a composition called ‘Early In The Morning.’

Neil Diamond sings of the many ways that the signs of the universe influence life on a personal and larger level. He also highlights that some mold their lives by defying signs, while others follow them to guide them through existence on Earth. This is the 10th track on Diamond’s album Beautiful Noise, released in 1976.

This song is unique to the signs category because Beyoncé is singing about astrological signs, particularly about the men she loved. She points out the good and bad of each sign as astrological principles present them and end by saying that she has “open arms” for people who belong to each and every sign.

Related: Head over to the songs about stars playlist.