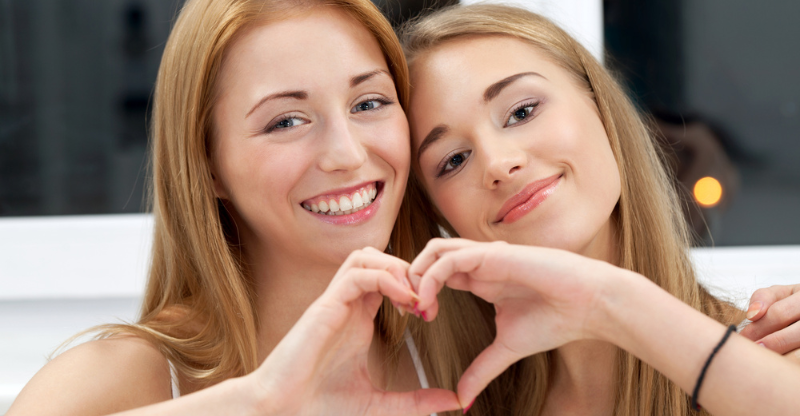 These days, the term “sister” can take on many different meanings. In the words of indie-pop songwriter K.Flay, “Family is a verb.” From songs about looking back on fond childhood memories with one’s sister to realizing your close girlfriends have become a part of your family, here is a dynamic mix of songs about sisters.

Alt-pop singer K.Flay wrote this sister song in honor of her blended family. After her father passed away, her mother married again, and suddenly she had two step-siblings. The upbeat song chronicles her feelings about gaining her new family members and the warmth and chaos that comes with adding to your household.

Related: Get your loved ones and check out these family songs.

A heartwarming tune about always being there for the ones you love, songwriter Taylor Edwards tackles the balance of growing up but still keeping in touch with family. She tells her sister she’s always just a phone call away in the song. She imparts little nuggets of wisdom throughout the lyrics and reminds the listener, “You can always call your sister.”

Sisters Are Doin’ It for Themselves – Eurythmics ft. Aretha Franklin

Nominated for a Grammy, this 80s hit is a feminist pop anthem. Eurythmics frontwoman Annie Lennox brought in heavy players in the industry during the recording process. Aretha Franklin provided vocals for the track. Members of Tom Petty’s band, The Heartbreakers, provided instrumentation in the studio. Lennox was particularly proud of this tune as it relates to an important topic of hers, women’s rights.

This One’s for the Girls – Martina McBride

This song is all about saluting women throughout all stages of their lives. From ages thirteen to ninety-nine, country singer Martina McBride offers her praise and support within the lyrics. Fellow country star Faith Hill stepped in to sing background vocals for this tune, and McBride’s own two daughters sang backup on the track.

Driven by heavy rhythm guitar and dynamic lead guitar, The Rolling Stones’ ‘Dance Little Sister’ was written by bandmates Mick Jagger and Keith Richards. The single was included in their 1974 album, It’s Only Rock ‘n Roll. Jagger drew inspiration from his nights spent in Trinidad with his wife partying for hours with the locals.

Reba McEntire often covers the topic of family in her original music. Released on her 2003 album, Room To Breathe, ‘My Sister’ tells the story of a girl calling up her sister and reminiscing about growing up. As she walks down memory lane with her, they recall silly fights, past boyfriends, and lessons learned. The hook centers around the protagonist realizing that her sister has also become her friend in adulthood.

Related: See our playlist of songs about kids growing up.

I’ll Take Care of You – The Chicks

‘I’ll Take Care of You’ has universal poetic lyrics that are open to interpretation. The Chicks’ track about taking care of one another can take on many different meanings, from two sisters looking out for each other to a mother watching over her daughter. Take a listen to the song and see who it makes you think of.

Singer-songwriter Carly Simon sings about her older sister in this biographical tune. The lyrics highlight the singer’s feelings of being overshadowed by her sibling, who seems to gain much more attention due to her strength and ability. Though the younger sister feels a bit left out, the song clarifies she’s not angry or jealous but is amazed by her older sister.

Don’t Talk about Him, Tina – The Pistol Annies

A sassy track on the Pistol Annies’ second album, ‘Don’t Talk About Him, Tina’, tells the story of a group of girlfriends trying to help their friend get over her ex. The problem? She can’t stop talking about him even when she’s meeting new suitors at the bar. The Pistol Annies is a country music supergroup comprised of Miranda Lambert, Ashley Monroe, and Angaleena Presley.

Related: Check out our playlist of songs about hating your ex.

This sorrowful song embodies the darker side of sibling rivalry. Released as CHVRCHES’ debut single in 2012, it suddenly disappeared from streaming services after its initial drop. During this time, the group changed labels from National Anthem Records to Virgin Records, and their new label house wanted to remix the song for a fresh feel.

Blues-rock legend Stevie Ray Vaughan and his band Double Trouble try a coming-of-age story with ‘Look at Little Sister.’ The lyrics leave the song open to interpretation, and Vaughan’s instantly recognizable clean riffs fill out the instrumentation. At the height of his career, he died in a tragic helicopter crash in 1990 due to dense fog.

I’ll Stand by You – The Pretenders

After she wrote it, the Pretenders’ frontwoman and founding member Chrissie Hynde wasn’t crazy about ‘I’ll Stand By You.’ But after playing the tune for several friends, the song’s message brought them to tears, so she decided to release it. The timeless hit song has been covered by many singers, including Carrie Underwood and the Glee cast. In the 90s, Hynde appeared on the popular sitcom Friends as a musician performing at the fictional coffee house, Central Perk.

A nontraditionalist critique of the wedding and marriage process, this feminist song questions many archaic traditions still carried out in modern marriage ceremonies. The song questions why the woman must trade her identity and home to become a wife. This track appeared on 10,000 Maniacs’ 1987 album, In My Tribe.

Good Friend and a Glass of Wine – LeAnn Rimes

Appearing on her studio album, Family, 90s country icon LeAnn Rimes co-wrote every song on the record, including ‘Good Friend, and a Glass of Wine.’ She wrote the title down in a notebook while on a plane and missing home. One of her favorite things to do is sit down with her close friends, have a glass of wine, and unwind.

Featuring deeply poetic lyrics marking a close relationship between sisters, this 2012 single highlights an unconventional relationship. Due to absent parents, the older sister is left to take care of her younger sibling as they find their way in the world. The story is told from the younger sister’s point of view as she communicates through lyrics her sister’s strength, wit, and fierce protection of her family.

Dylan’s ‘Oh Sister’ is a song about a crumbling relationship with someone close to him and a layered story full of messages about pettiness, regret, and faith. Some say the song is about his failed relationship with fellow musician Joan Baez. When Dylan was recording the song, he stepped out of the studio and saw a woman walking with a violin case down the street. Though he had never heard her play a note, he invited her to add a violin part to the song.

This atypical Night Ranger ballad was written by the band’s drummer, Kelly Keagy. He wrote it to his little sister to communicate to her to not grow up so fast, and no matter what happens, he’ll always protect her. The original title for the song was Sister Kristy because that is his sister’s name. However, the band thought he was saying ‘Sister Christian,’ so they went with that title instead.

Train frontman Pat Monahan wrote the hit song ‘Hey, Soul Sister’ about the Burning Man festival, which takes place in the southwestern desert each year, even though he’s never actually attended. His friends went and were telling him about it. From there, he wrote down lyrics while conjuring up images of a powerful, mystic-inspired woman who became the song’s subject matter.

When We Grow Up – Diana Ross

‘When We Grow Up’ is a song about speculating on what the future holds for two siblings. Ross wonders if she’ll wear dresses and if her sister will grow up big and strong. Whatever the future holds, the song’s message centers around the protagonist worrying they’ll grow apart. Because of this, she admits she’d prefer to stay just like they are to be friends forever. The song was on her 1973 album, Touch Me In The Morning.

Related: Listen to the perfect songs for best friends.