14 Songs about Smoking (or That Mention Cigarettes) 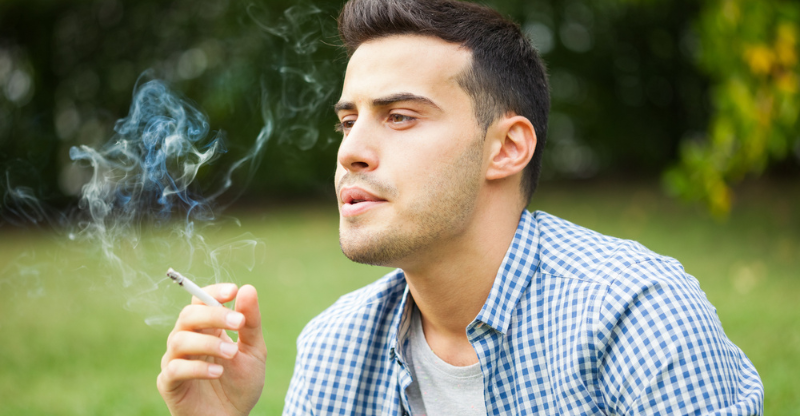 Everyone used to smoke. In the office, at the cinema, even on airplanes!

All that has now changed, of course. Since the adverse health effects of cigarettes came to light, smoking in most western countries is frowned upon.

Despite this, there’s a certain aesthetic to cigarettes that was (and still is) often used in music. So kick back and enjoy these songs about smoking (or that mention smoking).

This thrumming country song features conversational vocals and celebratory horns. Tex Williams has a comical take on the addictive nature of cigarettes. Some people are constantly turning to cigarettes, even if they’re in the middle of something important, and Williams calls these kinds of people “nicotine slaves.” The song sets up different scenarios where smoking precedes the anticipated outcome: “tell St Peter at the Golden Gate that you hate to make him wait, but you just gotta have another cigarette.”

“I stumbled out of bed, I got ready for the struggle, I smoked a cigarette, and I tightened up my gut.” In this classic piece from his ’80s canon, we find Mr. Cohen looking up an old flame: “I got this old address of someone that I knew.” He shows up “with a big bouquet of cactus” (what an image!) and they run off together, “and I promise, cross my heart, they’ll never catch us.”

Lipstick Traces on a Cigarette – The O’Jays

The O’Jays reminisce on a relationship that is now over in this bluesy song. The narrator desperately misses his ex, asking, “won’t you come on home?” The simplest reminders and memories of this person take on a much more painful meaning now that they are gone – even “lipstick traces on a cigarette” serve as a reminder of what this pair used to be.

Nina Simone takes on the role of jilted lover in this emotional ballad. She sings to a husband who cheated on her, mourning his ruined relationship. She leaves a note, her wedding ring, and an ominous warning: “remember darling, don’t smoke in bed.” Smoking in bed is Simone’s metaphor for infidelity; the cigarette set fire to their marriage bed, and it cannot be reconciled.

Related: Check out these songs about cheating.

Sam Cooke’s smooth and passionate vocals are perfect for an introspective song. ‘Smoke Rings’ paints the picture of smoke rings floating off into the night sky. Cooke wonders, “where do they go, the smoke rings I blow each night?” The swaying feel of the song matches the relaxed detachment from the world that Cooke is experiencing as he smokes.

‘Cigarettes and Coffee’ does a great job of capturing the beautiful simplicities of love. Otis Redding and his girlfriend are drinking coffee, smoking cigarettes, and talking at three in the morning. It’s nothing that adventurous, nothing that romantic, but it’s moments like these when Redding realizes how in love he is. “I’ve got you, and you’ve got me, and we’ll have each other,” and nothing else is needed.

Related: Wake up with our playlist of coffee music.

This song is a lovely ballad that borders between romantic and heartbreaking. Tom Waits is at a bar (no surprise there) and spots a woman who instantly sparks feelings in him. Even though Waits is interested in this woman, he’s hesitant to make a move. “I turn around to look at you, you light a cigarette, I wish I had the guts to bum one, but we’ve never met”

Related: Here are some more don’t want to fall in love songs.

At its core, ‘Sugar Mountain’ is about growing up. It has that bittersweet feeling of a nostalgic song, and its stripped-back style lets the lyrics really sink in. “Now you’re underneath the stairs, and you’re giving back some glares, to the people that you met, and it’s your first cigarette.”

Related: Hike over to our list of mountain songs.

Originally written by Kris Kristofferson, this narrative-style song follows Johnny Cash as he struggles through a hangover. A bad hangover can have you questioning every decision you’ve ever made and regretting all the fun you had the night before. “I’d smoked my mind the night before, with cigarettes and songs I’d been pickin'”

Related: Find this song on our playlist of Sunday songs.

Stuck Inside of Mobile With the Memphis Blues Again – Bob Dylan

This song features ambiguous characters with mysterious backgrounds, giving us a snapshot of the different lives of people in Mobile, Alabama. Mobile is known for folk music, but Bob Dylan has the Memphis Blues. It creates this feeling of being in a place where you don’t belong. A girl called Mona warns him to stay away from “the railroad men” who “drink up your blood like wine”. He admits he met one who “smoked my eyelids and punched my cigarette” (interpret that as you wish!)

Related: Feeling stuck? Find similar songs on our playlist of songs about being stuck in a relationship.

“So we bought a pack of cigarettes and Mrs. Wagner pies, and walked off to look for America.” In this evocative song, Simon & Garfunkel sing about their search for The American Dream (and how it can be tough to find). The couple in this song packs up and moves to America, but the narrator feels lost, saying, “I’m empty and aching, and I don’t know why.”

Related: Head over to our list of the best USA songs.

“Last cigarettes are all you can get, turning your orbit around.” The peculiarly titled ‘Jesus, Etc.’ seems to be sung from the perspective of someone trying to calm down a person who is having a crisis. This person is questioning everything, wondering about their place in the world, and overwhelmed by the hardships of life. The narrator acknowledges these worries but offers support and comfort, saying, “our love is all we have.”

‘Cigarettes & Alcohol’ is an abrasive rock song, and its intensity pairs well with the drugs and alcohol mentioned in the song. Oasis sings about turning to these vices when it feels like something in your life is missing. “I was looking for some action, but all I found was cigarettes and alcohol.”

Related: Grab a drink and enjoy this playlist of songs about alcohol.

This horn-heavy song sounds super old-timey, and it’s easy to picture it playing on an aged record player in some vintage store. ‘Reefer Man’ was originally recorded by Cab Calloway, asking many times, “have you ever met that funny reefer man?” The “reefer man” in the song is someone that sells cannabis, which was only illegal in 29 states in the US at the time the song was written.