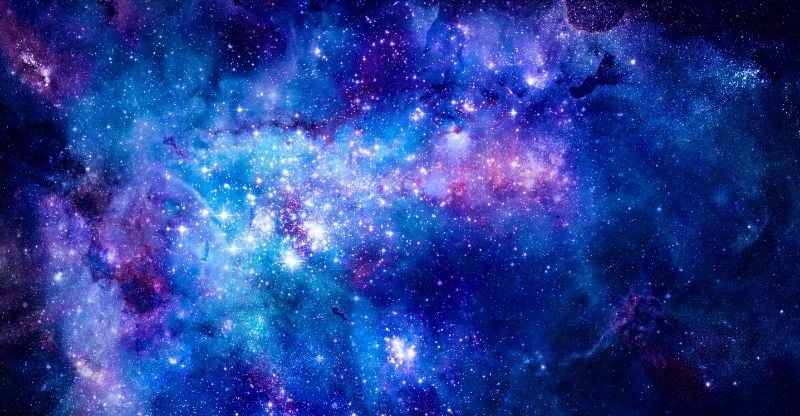 Bearing in mind we’re floating in it, it should come as no surprise that there are some great songs about space.

As you’re about to see, there are some epic songs about space exploration, astronauts, and of course, extraterrestrials. But like songs about the sun or moon, the songs aren’t always literal. Many use space as a metaphor for something else (isolation or loneliness is a common one).

So grab your spacesuit and strap yourself in. We’re about to boldly go where no other blog has been (sorry, I couldn’t resist).

Kraftwerk are a German band who were (and still are) pioneers of electronic music. You might say they even sound a little sci-fi.

In this version of ‘Spacelab,’ an in-orbit astronaut (Alexander Gerst) joins the band via video chat to perform this song from the International Space Station (ISS).

This is just about the coolest thing you’ll ever see!

It’s possibly the most famous space song of the lot; it’s as much a song about loneliness and isolation as it is about space. In the song, Major Tom disconnects his spacecraft and decides to float off into space.

It was released around the time of the moon landings, which helped elevate the song into cult status. It didn’t do Bowie’s career any harm either. Soon after, he unleashed his Ziggy Stardust alter ego on us, and the music world was never quite the same again.

‘Dancing Out in Space’ is another good later period song of Bowies (from The Next Day).

“Well, we had a lot of luck on Venus, we always had a ball on Mars.”

Deep Purple’s Machine Head album starts with a song about cars (‘Highway Star’) and finishes with this song about space travel. They take us on a ride around the solar system.

Tragically, the astronaut Kalpana Chawla took a copy of the album with her onboard the ill-fated Space Shuttle Columbia in 2003. So guitarist Steve Morse wrote a song called ‘Contact Lost’ as a homage to her and the crew (it’s on their ‘Bananas’ album).

“Won herself a pass to some far off moon, it was second class but what’s to lose.”

Ok, this is a bit controversial. ‘Space Travel Is Boring’ is a song by Modest Mouse from their very fine ‘The Moon and Antarctica” album.

But, here’s the thing. The cover of the song by Sun Kil Moon is so freaking good that I had to include it.

It’s one of those few examples of where a cover is widely regarded as better than the original. In fact, the album it’s from (‘Tiny Cities’) is an album full of Modest Mouse covers!

“Pray that there’s intelligent life, somewhere out in space / ‘cos there’s bugger all down here on Earth!”

This bit of comedy gold from their 1983 movie The Meaning of Life delivers perhaps the starkest truth us humans have to grapple with. Namely, that in the grand scheme of the universe, the likelihood of our existence is almost zero!

Here we see a brilliant live performance from their 2014 live show, with a guest performance towards the end from a couple of eminent scientists (I won’t spoil it for you).

This song was inspired by a short story written by Ray Bradbury called The Rocket Man, which appeared in his collection of 18 science fiction short stories called The Illustrated Man, released in 1951.

The book deals with the emotions of an astronaut as he leaves his family behind and venture into space, and likens it to a soldier leaving for battle. The rocket man grows more and more isolated with every trip, and is pulled back (like gravity) to the unknown adventure in the sky (a bit like fame and stardom, one assumes).

The opening track from the long-awaited We Got It from Here… Thank You 4 Your Service album in 2016.

The lyrics portray an America “hostile to African-Americans, Mexicans, Muslims, gays, and the poor” as NPR said.

This brilliant intergalactic video is dedicated to band member Phife Dawg who sadly passed away after the recording of this song (his lyrical interplay with Q-Tip was the backbone of the group).

The brilliant video features a ton of cameo appearances from the likes of Pharrell Williams, Anderson Paak, Erykah Badu, and more. See if you can spot them.

“I was born on this rock, and I’ve been travelin’ through space.”

This song is from Steve Miller’s 1969 album, Brave New World (an album which, incidentally, Paul McCartney contributed to under the name ‘Paul Ramon’).

At the time of writing this, people were going nuts about space with the moon landings.

This song also gets a mention in his other track, The Joker (“some people call me the space cowboy”).

“Hey, Mr. Spaceman, won’t you please take me along.”

Mr Spaceman was coined as ‘space rock’ by the music press at the time (it’s also considered one of the first ‘country rock’ records).

It’s from The Byrds’ 1966 album Fifth Dimension (which included the classic ‘Eight Miles High’ that you can read more about on our songs about flying playlist).

The lyrics are about an encounter with extraterrestrial life. The narrator asks Mr. Spaceman (an alien) to take him away along for the ride. But the alien splits (“so long, we’ll see you again”). He’d seen enough!

The band Wilco accompany Roger McGuinn here, with the exceptional Jay Bennett on guitar who passed in 2009.

On the face of it, this is an alien-abduction song (“next thing I knew they ripped me from my bed”). But when you read between the lines, it’s appears to be more about fame.

In an interview for Quietus, frontman Brandon Flowers said he was “looking for a mixture of ‘Space Oddity’ and ‘Rocket Man'”.

It’s got a great singalong chorus, so no wonder they often use it as the opener on tour.

‘Looking for Astronauts­’ – The National

“You know you have a permanent piece of my medium-sized American heart.”

If you hold out too long, the song suggests, you’ll never find one. And besides, isn’t it a little too late for this?

“I come from a planet a long way from here, and I bring a message for mankind to hear.”

‘A Spaceman Came Travelling’ puts forward the radical idea that Jesus was an extraterrestrial visitor.

The story goes that De Burgh had read the book Chariots of the Gods by Erich von Däniken while staying at his friends apartment (he was broke at the time).

The book made him consider what if the star of Bethlehem wasn’t a star, but a space craft, and that there’s a benevolent entity keeping an eye on the world (Neil Young’s ‘Star of Bethelehem‘ suggests something similar).

The song became a popular Christmas song in 1986.

“Bound for a star with fiery oceans.”

There were few highlights from the Stones’ psychedelic Their Satanic Majesties Request album (1967). This was one of them.

Space exploration was big at the time (Kubricks’ masterpiece 2001: A Space Odyssey came out in 1968), so it’s no surprise the Stones fancied cashing in on it too.

This is the closest the Stones’ ever got to sounding like Pink Floyd.

As well as polluting the planet, we’re also polluting space. With little regulation in place, it’s a flying junkyard of debris up there. More than 27,000 pieces of orbital debris are tracked by the Department of Defense’s global Space Surveillance Network (SSN) sensors.

Here, a woman called Sally is the unfortunate victim of a piece of space junk landing on Earth.

“Start with a Sun and move on out, the future’s in the skies above.”

A song about living in outer space, with Sammy Hagar on vocals (better known as the one-time vocalist for Van Halen). I had to check this wasn’t a Led Zeppelin song when I first heard it (sounds a lot like ‘Communication Breakdown’!).

Hagar has a fascination with space and is adamant there is life out there. In a 2011 interview with writer Eric Spitznagel, Hagar said: “You know how big the universe is? It’s freakin’ huge! If we’re really the only ones out there, that’s scarier to me than thinking there are aliens.”

This song has also been covered by Iron Maiden.

“Space baby, you got no planet”

You’ve probably never heard of The Tubes until now. That’s because they were a little known band from San Francisco, but they had real calibre (and were produced by rock mogul Al Kooper).

This song is particularly good. Shame they never got the attention they deserved.

‘Out of Space’ – The Prodigy

“I’m gon’ send him to outer space, to find another race.”

The sample here is from ‘Chase The Devil,’ a reggae song by Max Romeo & The Upsetters. A popular rave tune in the ’90s, where ‘taking your brain to another dimension’ usually consisted of taking substances rather than going into space.

Note: we feature their other track, ‘Firestarter’ in our playlist of fire songs.

More Songs about Space (in case you needed more!)