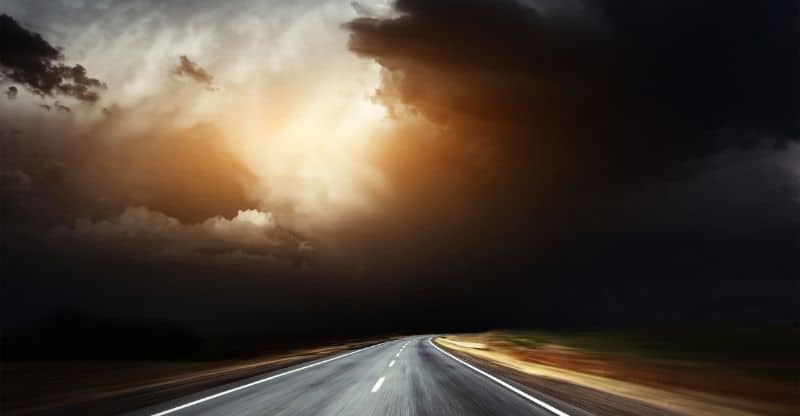 Storms are extreme weather events that often wreak havoc on people and anything that lies in their path.

When it comes to the arts, storms have always cropped up in works of fiction (e.g., Shakespeare’s King Lear) and, of course, many songs.

Storms – like clouds and rain – are often used metaphorically to denote something negative. We have the ‘stormy relationship.’ Or a ‘storm looming’ (to signify some political, social, or emotional upheaval). Or a ‘storm’ can be used to express mixed up feelings inside, like in the case of Kenny Chesney’s ‘Spirit of a Storm.’

So without further ado, here are some of the best songs about storms ever written. So batten down the hatches and enjoy. You’re about to discover some great songs.

‘Riders on the Storm’ – The Doors

‘Riders On The Storm’ holds a special place for most fans of The Doors, as it was the last song Jim Morrison recorded before his untimely death in Paris a few weeks later.

It’s also a superb song that captures the sensation of a late-night drive while, rather disconcertingly, “there’s a killer on the road.” You gotta love that rain effect, too.

The words were partly inspired by a play Morrison was working on called ‘The Hitchhiker.’

‘Shelter from the Storm’ – Bob Dylan

From Dylan’s celebrated mid-’70s album Blood on the Tracks, ‘Shelter from the Storm’ is one of his most beautiful songs. Like most Dylan songs, there’s endless debate about the meaning of certain lines (e.g., the “one-eyed undertaker”).

But however you look at it, it’s a song about taking refuge from a storm (whether that’s a meteorological, political, or emotional one, that’s for you to decide).

If you want more Bob Dylan, ‘Down in the Flood’ is another excellent song about floods.

The opening line from The Stones’ brilliant ‘Gimme Shelter’ is all about getting shelter from the storm, too.

“Oh, a storm is threatening my very life today. If I don’t get some shelter, oh yeah, I’m gonna fade away.”

It’s the first track on their Let it Bleed album. So if you’ve never heard it, you really should drop everything you’re doing right now and go check it out. You’ll thank me for it later.

‘Storms’ is one of the best moments in Stevie Nicks’ career, despite the song being relatively unknown (it appears on their excellent album, Tusk).

Here, Nicks admits her failings in a relationship. “So I try to say goodbye, my friend, I’d like to leave you with something warm, but never have I been a blue calm sea, I have always been a storm.”

Wouldn’t it be great if we could all be this honest? Such a good song.

“It is time, for stormy weather,” singer Black Francis asserts.

What is stormy weather? Is it social or political upheaval? Or maybe it’s just a thunderstorm on the way. That’s open for interpretation. It’s a great song, nonetheless.

T-Bone Walker wrote this song in 1947. It’s now a blues standard, covered by The Allman Brothers Band, B.B. King, Van Morrison, and Eric Clapton (among others).

The song is about a lovesick guy who can’t get his woman back. “They call it stormy Monday but Tuesday’s just as bad.”

Some exquisite guitar playing here, of course. What a song.

‘After The Storm’ – Mumford & Sons

The storm here is a metaphor for life itself. Humans are searching for something impossible to find, but that thing (call it love or meaning) can’t be found here on Earth.

Only when you pass away can you find it, “get over your hill and see what you find there, with grace in your heart and flowers in your hair.”

You know that sensation you get when a storm is brewing in the sky?

Well, here Bono uses that as a metaphor for a bad patch in a relationship (we all know that feeling too.) “The air is heavy, heavy as a truck,” he sings. “Sure, hope the weather will break soon.” I bet he does!

An electrical storm is another word for a thunderstorm (or lightning storm), in case you were wondering.

‘Spirit of a Storm’ – Kenny Chesney

Chesney always makes thoughtful songs. There’s always an honesty there. Here, he admits there’s always a storm raging inside of him (“dark clouds gather, that old wind begins to blow.”)

When he can’t find a way to calm the sea (related: see our playlist of songs about the sea), he sits “in this old chair” and soaks up the rain.

Wise move. Moods can change just like the weather. So sometimes, you’re better off sitting it out.

‘Stormy Weather’ is a sentimental love song (or ‘torch song’ where the singer laments an unrequited love or long lost love – literally means ‘holding a torch for someone.’)

It was written by Harold Arlen and Ted Koehler in 1933 but covered by just about everyone.

This version is one of the best. We see a disappointed Etta James pining for her man to return, “Don’t know why there’s no sun up in the sky.”

Here’s one of the best rocks songs about storms from Billy Joel. The narrator wants to play the field. He’s restless for the “open water,” in other words, he wants the freedom to see other women.

But he knows trouble lies that way, “red flags are flying from the Coast Guard mast.” Joel also had a load of legal issues with his manager (who he ended up seeing), so it was chopping waters all around for Joel.

Sometimes you get involved with someone, and you know things probably won’t end too well, but you do it anyway.

That’s the idea in this song. There’s a storm a-coming when she leaves him (he knows she will). Hence he needs a ‘storm warning’ that warns him of ‘imminent misery’ ahead!

Funnily, it’s a sort of breakup song before he’s even started.

‘Stormy’ is about a girl who’s gone ‘a bit weird’ on the narrator.

One day, she was fine (he compares her to “a warm summer breeze”) and then ‘stormy’ the next.

“Bring back that sunny day,” he sings in the outro.

‘Ridin’ The Storm Out’ – REO Speedwagon

Sometimes, life sucks. Do you know what you gotta do? Listen to the message in this song: ride the storm out.

Wait for the snow to thaw out, the lightning strikes won’t last forever, the rainy night won’t persist, the thunder rolls will eventually cease.

Ride out the minor blip. Good times will follow 🙂