21 Best Songs about Sugar for Those With a Sweet Tooth 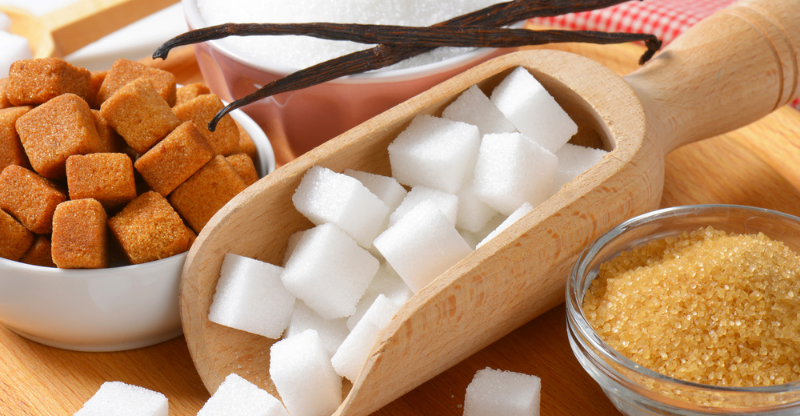 Sometimes, you just can’t help but grab a sweet treat now and then!

Sugar and its sweetness have enticed humans of all ages for years. Musicians are no strangers to the topic. Many famous songs have been written about sugar or used the sweetener to symbolize other themes such as love in their tracks.

Hopefully, you have a musical sweet tooth because here are some of the most famous songs about sugar.

This song finds lead singer Adam Levine begging his romantic partner to show him some sweet love. The song is fueled by innuendo but still managed to be one of Maroon 5’s biggest hits of all time due to its clever lyrics and catchy sound. The track was initially intended for Levine’s co-writer Mike Posner, who gave it to the band after his record company shelved his album Pages.

Related: Listen to this song on our playlist of songs about food.

The Archies sing of the sweetness of loving a wonderful person in this simple classic track. Despite competition from a wide range of top music performers, including The Beatles, this became the most popular song of 1969 in the United States. It was written to appeal to kids and adults, as the Archie cartoon TV show that the band was from appealed to preschool-age children.

Related: Sing along with more of the best karaoke songs from the 80s.

This track warns against pursuing a romance with a love interest who seems sweet at first glance but may play games and break your heart when you get to know her better. The protagonist manages to resist the temptations of the woman he’s interested in here. This 2015 European hit samples ‘Suga Suga’ by Baby Bash from 2003.

Related: Head over to the best songs about betrayal.

While its lyrics talk at times about dark racist themes, ‘Brown Sugar’ feels more like a somewhat lighter song about interracial love and passion to many listeners. Mick Jagger of The Rolling Stones had several interracial romances that may have inspired the song, its theme, and many of its lyrics.

Related: This song features on our playlist of the best songs about taste.

The narrator of this Echo & the Bunnymen piece talks about a lover who is mesmerizing but hard to hold on to. He and the woman in question seem to fight but make up as a regular part of their relationship, with her sugary sweet kisses keeping him by her side.

I Want a Little Sugar in My Bowl – Nina Simone

Full of innuendo, this Nina Simone track references Bessie Smith’s earlier and equally risqué song ‘Need a Little Sugar in My Bowl.’ The song is about wanting a passionate love in one’s life but feels less urgent and more empowering than Smith’s earlier track.

Related: Feel empowered with these songs about accepting yourself.

Here’s an international hit inspired by the classic ‘Boogie Woogie Bugle Boy’ that also samples a military cadence called ‘Tarzan & Jane Swingin’ on a Vine.’ Christina Aguilera finds passion with “a sweet talkin’ sugar-coated candyman” that makes her feel out of control with desire.

Related: See our playlist of the best songs about wanting someone.

Pour Some Sugar on Me – Def Leppard

Sugar refers to passionate encounters in this song, with the narrator asking a lover to give him the attention he wants. The Archies’ ‘Sugar, Sugar’ is likely one of many inspirations for the song and its lyrics. The track has made numerous pop culture appearances since its release in 1987.

Related: You can find this song on our list of easy karaoke songs for men.

Sugar on My Tongue – Talking Heads

Here we have a protagonist attracted to his neighbor and hopes to have a passionate encounter with her one day. The line “Never, never, never find another” implies that, despite not really knowing this woman and having a passing attraction to her, he already feels an exclusive bond with her of some sort.

Elvis Presley sings this lullaby-style track about a magical dreamland full of elements made of candy where “the moon is a marshmallow dream.” Presley sang this with the Mello Men in 1963, and Preslisa covered it in 2013. Bob Roberts and Ruth Batchelor wrote the song.

Related: Drift away with the best dream songs.

Harry Styles tells a romantic story about a sweet love interest in this piece, which shows how exciting new love can be when you are in the middle of it. Model Camille Rowe is a possible inspiration for the lyrics, as the two dated around the time the song was written, and Watermelon Sugar is one of her favorite books.

Related: Have a crush? Listen to the best songs about falling in love.

‘I Can’t Help Myself (Sugar Pie Honey Bunch)’ is a Motown classic about a sweet romance. The song’s co-writer, Lamont Dozier, was inspired to write the song by the compliments his grandfather would give to women during his childhood. He was inspired to write the title because he couldn’t help himself from using the same melody as he did for The Supremes’ ‘Where Did Our Love Go.’

A jealous guy wishes he was his crush’s boyfriend in this track. He deals with his resentment and jealousy by trying to convince her—and himself—that he cares as little about her as she cares about him. The title and some of the lyrics refer to the fact that this guy and his love interest have nowhere to go from where they stand now.

Related: If you’re crushing on someone, check out these crush songs.

Sweets for My Sweet – The Drifters

The Drifters sing of a dreamy and romantic relationship here. Lyrics such as “(y)our first sweet kiss thrilled me so” show how the song has an infatuation element. The Searchers, Tina Charles, and CJ Lewis all covered the track after its original release in 1961, with The Searchers’ version appearing on the band’s Greatest Hits album in 1963.

A Spoonful of Sugar – Julie Andrews

This song from the Disney musical Mary Poppins finds Julie Andrews’ magical nurse trying to convince her young charges that sugar will make their medicine easier to tolerate. The track, which is one of the most popular in the film, was inspired by a polio vaccine.

Related: See our playlist of songs about Mary.

The protagonist of this song tries to woo his crush at the coffee shop. This Number One hit was the first Hot 100 song in the United States to have “sugar” in its title. A 1940s organ known as the Hammond Solovox created the unique whistling riff that helped make this piece popular.

Related: Start your morning with the best songs about coffee.

Sugar and Spice – Icon For Hire

This one is somewhat abstract, but it seems to be about a narrator who is fed up with his love life and the glittering promises of society. He says, “I don’t want your sugar and spice,” indicating that he’s done with false promises and sugar-coated communication.

Alesso’s ‘Sweet Escape’ features gentle violin music and vocals from Sirena. It’s about running away to start an exciting, new, and free life with someone you love that you will support through thick and thin. The lyric “Nothing can stop us now” demonstrates the feelings of strength that a happy relationship can evoke.

Related: Find a new beginning with the best songs about starting over.

Kitty Wells wants someone special to love her sweetly morning, noon, and night in this simple track. Charlie Phillips—the original singer—and Odis Echols wrote the piece, which has been covered by Johnny Cash, Linda McCartney, and many others since it was first performed.

Roy Orbison says he lives and dies for his lover’s affections in this track, which he co-wrote with Bill Dees. He goes so far as to say he needs her “sugar and honey” not just at any time but all the time.

The narrator here enjoys the love and adventure he gets with his romantic partner. This is one of the Grateful Dead’s most famous and most performed songs of all time. His lover’s affections make him happy and carefree all year long as if it was a warm and sunny summer.

Related: This song is also on our playlist of flower songs.