25 Songs about Surrender You Won’t Be Able to Resist 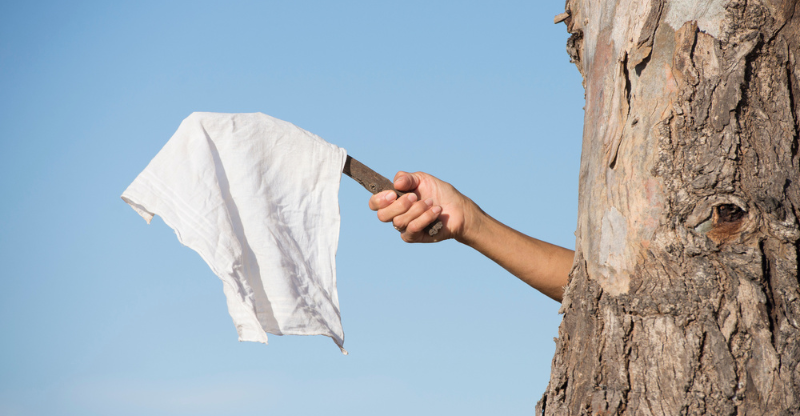 Surrendering can be scary, especially for those who are used to having strict control over their thoughts, feelings, and actions. Many songs can help listeners deal with the feelings that surround surrendering.

Here are some of the best songs about surrender to help you understand this intimidating concept.

This track finds Elvis Presley in love with a special woman. It is obvious to him that they both have strong feelings for each other, and he knows that she understands their connection, too. As a result, he asks her to surrender to her feelings so they can fully enjoy their relationship.

Here, we find a protagonist who looks at his parents from the perspective of a 14-year-old boy. He seems to consider his parents flawed and a little weird, but they are still okay in his mind. The song was inspired by Cheap Trick guitarist Rick Nielsen’s childhood; he remembered that his friends thought of their parents as strange at the time.

Related: Were your parents lame or cool? Here are the best songs about parents.

Natalie Taylor wrote this piece with her husband, John Howard. The lyrics talk about two lovers who end their relationship due to a hardship getting in their way. Taylor says that the track—which has appeared in the series Jane the Virgin and Finding Carter—is one of her favorite pieces written with her husband.

Related: Fight through the hard days with this playlist of staying together songs.

This song finds John Denver looking for a greater purpose: “Lookin’ for something that I’d like to do with my life.” It seems that nothing is holding him to his old life anymore, so it might be time to look for a change that can bring meaning to his existence.

Related: What’s the point of it all? Check out the best meaningful songs about life.

‘Stop When the Red Lights Flash’ is a harsh piece with its narrator saying he will get his love interest to surrender to him. The song has a violent and desperate vibe as the protagonist uses metaphors to make it clear that he will get what he wants. The song may also refer to someone who commits illegal acts of some kind.

The narrator here asks a love interest not to worry about their feelings for each other. She seems confident about their connection, as she believes he will easily get him to surrender to her. The guy seems shy, and the narrator wants him to give in to both of their desires.

Tom Petty reminds a hurtful lover of the feelings she used to have for him here. He says he won’t let her forget about the things she told him. He wants her to be vulnerable with him and admit that she cares for him; he even gets down on his knees and begs her to be there for him.

This was the last single that Demi Lovato released on the studio album Here We Go Again. Lovato said that the powerful song was for female listeners who should remind the guys who hurt them that their mistakes affect the people in their lives. The song was a hit on the UK Singles chart in 2010.

‘Sweet Surrender’ hit three US Billboard charts after its release in 1998. It is hard to tell if Sarah McLachlan is feeling hurt by a toxic relationship or infatuated. Either way, she is surrendering to someone and realizing that this person has a strong effect on her life that she has trouble controlling.

Bruce Springsteen wrote this autobiographical song as an ode to rock music, but it became a homage to his friends and the memories they shared from their youth—particularly their lack of interest in school as kids. The song also addresses brotherhood and loyalty between friends: “Blood brothers in the stormy night with a vow to defend.”

Related: Celebrate your brother (even the ones from another mother) with the best songs about brothers.

The narrator here tells his lover that he is surrendering to her love. He asks her to be careful with him in exchange for his vulnerability and devotion. It may be too late, as it seems that the woman has left him: “Spend my time waiting by the phone. Oh, darling, come back to me.” He seems to struggle with being alone.

The protagonist here realizes he made a mistake in leaving his ex-lover. He doesn’t know why he made such a bad decision; it was never anything he pictured himself doing. He would give anything to be with her again and hopes the two can forget the hurt and surrender to their feelings for one another.

Related: If you wish you could take something back, listen to these songs about hurting someone.

Sometimes we need hope to keep going. That’s what this song is encouraging, asking listeners not to give up even when it seems like life’s challenges are getting too difficult or painful. The song reminds listeners that even the hardest of times will get better eventually if one perseveres and waits for the good times.

Related: This song features on our playlist of songs about being tough.

Céline Dion can’t stand being away from the man she loves and is ready to change everything to have him back. She is surrendering to her love as she realizes she already lives her life for this person and his love. It seems that she will only feel free when she gives in to her feelings.

This was the lead single from Birdy’s album Young Heart. It finds the singer dealing with her real-life dilemmas—specifically, making her own creative decisions as a music artist. It is about the journey of discovering one’s self-confidence and decision-making abilities and wishing for a simpler time of self-assurance from the past.

Related: Build up your ego with the best believe in yourself songs.

Shadows of the Night – Pat Benatar

Pat Benatar tells a love interest that he can be open and emotional with her in this track. She thinks they should enjoy the night they have together and be passionate and vulnerable to make the most of their time together and enjoy each other’s company.

The narrator here wants to know if his love interest has feelings for him. He hopes she will surrender to her feelings if she does care for him, as he is desperate for her affection. The song includes an instrumental break once the second verse and chorus are finished.

I Didn’t See It Coming – Belle and Sebastian

This duet finds its narrators struggling with growing up. The lyrics talk about the protagonists realizing that there are benefits to the wisdom that comes with getting older, allowing us to make the most of our talents. There is also a hint of sadness as the singers realize that life’s limitations are less obvious to young, idealistic people.

Related: Turning another year older can bring you down. Listen to the best growing old songs.

Laura Pausini finally admits that she has strong feelings for a romantic interest in this piece. She thought she didn’t need him, but it turns out that she does; in fact, she seems extremely head over heels for him and even says she never stops thinking about him. She’s not afraid to give in to her love any longer.

This track explores the pain of unrequited love. Its narrator is afraid to tell a woman he loves her; instead, he watches her date other men who come and go. He continues to say nothing, as he feels he isn’t good enough for her and is better off staying her friend.

Related: Find this song on our list of one sided love songs.

The male protagonist here wonders if anyone can relate to his dark and lonely feelings of inadequacy. He wishes he was someone else that he would like to be better, with qualities that he admires rather than criticizes. He wants to stop being a broken person and be proud of himself.

Related: See our playlist of songs about not feeling good enough.

This tune’s “city” refers to the world and its inhabitants as a whole. The song talks about the harshness of a world filled with unkind lies and the goodness of love in the world. It looks like the narrator can’t escape from the stress and overwhelm of Earth’s contrasting concepts.

Alexia Chellun fully surrenders in this track—in good ways and bad. She seems to be learning to accept all of her flawed, complex human sides to appreciate herself as a fully dimensional human. The song is a meditation track, meaning that listeners can use it to come to terms with their humanity and flaws in all their glory.

The members of Bone Thugs-N-Harmony criticize law enforcement in this track. They even discuss their violent behavior toward police officers and their questionable dealings in the Cleveland area. Eazy-E and his group NWA paved the way for these tracks in 1988, likely serving as inspiration for the piece.

Surrender to Me – Boston

Romantic love can be a confusing feeling. This track displays that confusion as the narrator realizes he has deep feelings for a woman who also irritates him with her sometimes manipulative ways. He believes she will give in to his love one day even though she hasn’t committed to him yet.