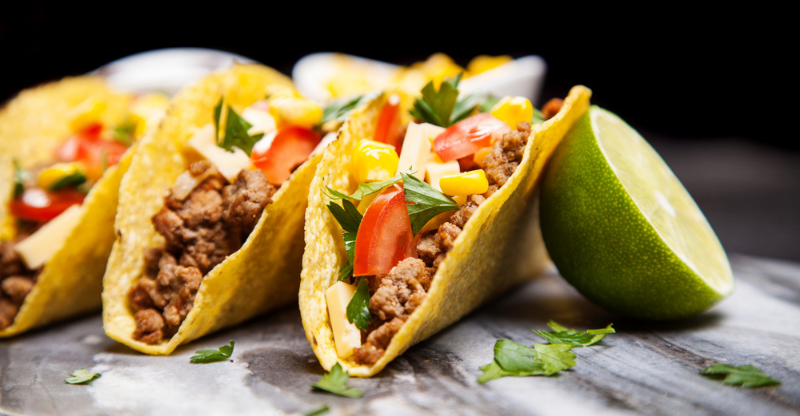 It’s Taco Tuesday! Or maybe that was yesterday, and you’re already looking forward to next week! This playlist has songs about tacos – or at least mentions tacos in the title – and will have you hungry in no time. Hit up your favorite taco joint and listen to some taco tunes!

Next time you serve tacos for a large group, queue up this novelty song about raining tacos! “It’s like a dream,” as the song says, and it’ll surely make you hungry as it lists the ingredients. Parry Gripp writes novelty songs, children’s songs, and has worked with many shows and commercials to create jingles. Amazon used this song in a 2017 ad campaign.

‘Tacos For Two’ is about a man on a date with his girl, and they’re out for dinner enjoying some tacos. You can tell they’re authentic and delicious because ‘”they warm up your heart and let love through.” Tommy Hancock was born and raised in Lubbock, Texas, and is said to be the “godfather of West Texas music.”

This song is an appreciation of tacos everywhere. The singer screams, “Tacos! Tacos! Tacos!” repeatedly, and the music video shows pictures of different taco shops. Peelander-Z is an eccentric punk-rock band who says they’re from Planet Peelander, specifically the Z area. Many of their concerts involve audience participation, making it a fun experience to see them live!

Alexandros is a Japanese rock band well-known in Japan but isn’t as popular outside of the country. ‘Fish Tacos Party’ is a much different song than what you’d expect from the title. The song starts with, “You gotta get yourself up in the morning no matter how much you don’t want to go to work,” and talks about how society wants you to live a certain way, but you have to stand out and live your own life.

The Lubim remix of ‘Tacos’ by Little Big is a bit faster than the original. While there aren’t many differences between the two versions other than the music, the music videos are what’s the most different. The band members sing and dance in food costumes in the original version, while the remix shows animated foods participating in a dance-off.

“But how in the world could I exist without tacos, enchiladas, and beans?” Maybe you share that sentiment! Doris Day recorded this song in the 1940s. It isn’t a super popular song and seems to be forgotten, but anyone who looks forward to Taco Tuesday (or tacos every day!) should add this to the dinner playlist to celebrate a warm plate of soft or crunchy goodness.

Felix & His Guitar, or Felix Garcia, recorded this song in 1958. It didn’t gain much traction, maybe because it’s an instrumental song that says “two tacos” periodically. The music is a Latin style and a quick pace, making it fun and easy to dance to.

‘Tacos and Tornadoes’ doesn’t mention those two things in the song specifically, but Koe Wetzel does mention many things about his Texas life, from wild critters to “the smooth electric water.” Tornadoes and tacos are two things that are found all across the vast state, which is likely how the song got its title since it fits with the lyrics.

Bonus Points creates electronic, hip-hop, and disco music. Most of his work is instrumental, including ‘Street Tacos.’ It’s unknown why he chose to give this song that title, but you could assume that the song may have been inspired by a food truck or somewhere similar.

This song won’t make you hungry. “Ponte los tacos altos” translates to “Put on your high heels.” The man in this song admires his partner and wants to take her out to show her off. “Tacos altos” may be considered slang or a regional term for high heels since “tacones altos” is also an acceptable phrase.

Adam Freeland is an English DJ who has been making music since 1991. ‘Best Fish Tacos in Ensenada’ is an instrumental track that would be fun to dance to in a club! The song was featured in a level of a PlayStation 3 game called LittleBigPlanet Karting. What about that song title? According to an interview, Adam loved a fish taco place in Los Angeles so much that he had to name a song after them.

Little Big is a Russian band that makes rave music, although they have a few gimmicky songs like ‘Tacos.’ This song mostly lists off different types of food, but it has some lyrics that most people can agree with: “I like to eat, you like to eat, everybody wanna have a dinner like me.” Who doesn’t want to eat!? This song made it to number 1 in Russia but didn’t chart anywhere else.