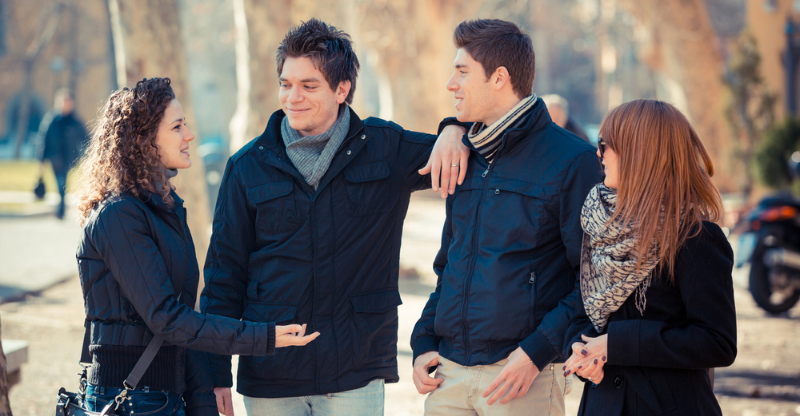 Have you ever gone a day without talking? Between spoken words and texting, probably not!

Talking (even when it’s just to ourselves) is something we can’t live without. These songs show us just how important talking is in various situations. From breakups and miscommunication to comfort and love, words build the foundation for most relationships in our lives.

Let’s talk about these awesome songs about talking!

Come Talk to Me – Peter Gabriel

This 7-minute song is an ode to the difficulties of raising a child. Though Peter Gabriel wrote this song with his daughter in mind, it could apply to any relationship where there is some barrier in communication. It’s clear the desire for communication is there, but something is blocking it. “If you’d just talk to me,” Gabriel cries, it would “unblock this misery.”

Related: Here are the best songs about families.

Smooth horns and deep vocals make this a sonically intricate song. A few different things are going on, but each element combines perfectly to make ‘Talk is Cheap.’ The song seems to be about a difference in communication styles in a relationship—the narrator is straightforward and laidback, while the other person is “a mouthful” prone to overthinking.

Related: Try not to think and enjoy these overthinking songs.

Turning to someone we love is often the best way to get through a hard time, but it can be scary to be vulnerable. Writer Chris Martin is feeling lost and confused, saying, “I’m so scared about the future, and I wanna talk to you.” The future unknowns are frightening, and Martin is seeking reassurance from a friend.

You Talk Way Too Much – The Strokes

The Strokes sing about the end of the relationship in this indie rock song full of rough electric guitar. The lyrics only have a few different lines, which is ironic for a song about talking too much. It’s ambiguous who is talking too much—it might be the narrator, trying to delay the breakup, or the partner, trying to overexplain why the relationship isn’t working anymore.

Related: Head over to our list of break up songs.

Tracy Chapman is a revolutionary artist, and her passion shines through in her song ‘Talkin’ Bout a Revolution.’ This song is about the hope that a revolution will come for the poor. She says, “I’ve been standing in the welfare lines, crying at the doorsteps of those armies of salvation,” but is hopeful that the tides are turning, bringing an improved life for those with financial misfortune.

Related: See more of the best songs about poverty.

Miscommunication almost guarantees that a relationship is doomed. ‘Talk’ is a catchy pop song that details the downfall of a relationship where neither person listens to the other. They’re both aware of the problem but just can’t seem to put aside their pride to solve it—”we try to fix it; it never works.”

It’s no secret that running into an ex after a breakup is weird. And awkward. And uncomfortable. And worth avoiding at all costs. Katy Perry has to make small talk with an ex in this song, and reflects on how strange it is that this person used to know her so intimately, and now they’re barely more than strangers.

You Talk Too Much – Joe Jones

This bluesy, horn-filled song has a comical approach to dealing with someone who talks too much. Full of complaints, Joe Jones says, “you talk about people that you’ve never seen…you can make me scream.” This person is so annoying that they even make Jones’ pet upset. It’s an endearing release of the frustration caused by this person’s unending chatter.

Can We Talk – Tevin Campbell

This sultry song describes an infatuation with another person. The narrator feels a need to get close to this person, and the line “just like a baby I could not talk…I tried to come closer but could not walk” shows how this love is almost inhibitive. The slow R&B style is captivating, just like this love has captivated the narrator.

Related: Check out these songs about wanting someone so badly it hurts.

Talk to Me – Stevie Nicks

Stevie Nicks encourages a partner to open up to her in her soulful song ‘Talk to Me.’ Nicks knows that it only causes more pain to keep secrets, telling this person “a wound gets worse when it’s treated with neglect.” The raspy and powerful vocals show how desperate Nicks is to hear this person’s truth.

We Don’t Talk About Bruno – Cast of Encanto

Encanto was a huge hit, and this song, in particular, was one people couldn’t get out of their heads. It tells the story of the mysterious Uncle Bruno. The family in Encanto treated Bruno as an outcast because of his unique abilities as a seer. Now, they don’t speak of him—except for this song full of family gossip.

Related: You can hear this tune on our list of Encanto songs.

Talk to Me – Rich the Kid and Tory Lanez

Torey Lanez tries to persuade a woman to spend the night with him in ‘Talk to Me.’ He says he can offer her a good time, great riches, and a night to remember. It’s a song full of fantasy, as Rich the Kid and Lanez dream about what could be. Though we don’t find out if this woman says yes, the song’s great beat and enticing lyrics make it hard to believe she wouldn’t.

Khalid wants to have the “what are we?” conversation in ‘Talk.’ He asks his partner, “can’t we just talk? Talk about where we’re going.” The relationship is moving fast, but he doesn’t want to get lost and end up losing the person because of a difference in expectations. The song is melodic and synth-heavy, and Khalid’s soothing vocals are as inviting as ever.

Talking to Myself – Linkin Park

This song was written from the perspective of someone watching a person they love struggle with mental health. They feel like an outsider, and despite all the love and support they want to give, it’s clear they are not getting through to this person. “I can whisper, I can yell, but I know I’m just talking to myself.”

Talk to Myself – Avicii

Avicii was an accomplished musician known for his electronic pop music and has created some of the most iconic club tracks of all time. In ‘Talk to Myself,’ he sings about the hardships of loneliness. Without someone to confide in, he says, “some nights I talk to myself, I say the words that I could say to no one else.”

Talk About the Passion – R.E.M.

‘Talk About the Passion’ combines elements of folk and rock to create an introspective song about the pitfalls of society. The line “empty prayer, empty mouths” could reference how people’s prayers sometimes don’t have substance. Everyone agrees that world hunger is a bad thing, but how many people actually do something about it? We talk about our passion for societal issues, but it’s uncommon that they’re backed with action.

Tom Waits’ throaty, deep vocals and Bette Midler’s jazzy, smooth voice compliment each other beautifully in this song. The track starts with Waits trying to get Midler’s attention as she playfully insults him and declines, saying, “I never talk to strangers anyway.” But by the song’s end, she’s come around, and they say, “we really aren’t strangers anymore.”

May I Have a Talk with You – Stevie Ray Vaughan

‘May I Have a Talk with You’ sings about love on the verge of failure. Whatever the tension is, if the pair doesn’t talk it through, “it won’t be long before our true love will be through.” The gritty vocals and riffing guitar have a conversation with each other throughout the song, each pulling back while the other shines.

Talk of the Town – The Pretenders

This song is directed towards a love that cannot be. The reason is unclear—maybe this person is too popular and unattainable, the “talk of the town.” Or maybe the narrator is embarrassed because their unrequited love is the talk of the town. Either way, this intense love is having trouble becoming a reality.