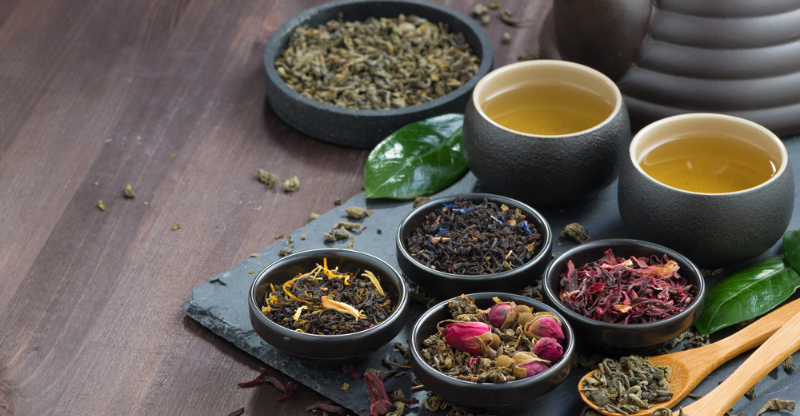 Who doesn’t love a delicious cup of tea? Few drinks are as comforting or have as rich of a history as tea.

It’s no wonder musicians of all kinds use tea to inspire many of their best songs. Here are some of the greatest songs about tea to give you an idea of how this versatile drink inspires art.

This song explores the decision-making process—namely, the agony of making a hard decision. It also talks about what such a decision involves and the aftermath that comes with it. Pennyroyal tea can be dangerous when consumed in high amounts, serving as a good metaphor for making a tough choice.

Tea in the Sahara – Gil Evans and Sting

Sting tells of the book The Sheltering Sky by Paul Bowles in this piece. The track appears on The Police’s final album, Synchronicity; a live version was released as a B-side to two single releases—one in Britain and the other in the United States.

The narrator here is feeling strange, possibly under the effects of some kind of tea. This person also hopes to be close to someone—possibly a former romantic interest—that makes life feel better: “Let me know that it’s alright to smile ’cause you showed me to your door.”

Tea for One – Led Zeppelin

Robert Plant wrote this one. It demonstrates the loneliness that traveling artists often feel while on the road and how boredom and tiredness can make a day feel like a lifetime. Many words were written while Plant sat alone drinking tea, inspiring the title.

Related: Find this song on our list of songs for lonely people.

Kacey Musgraves reminds listeners that everyone will not approve of them and their uniqueness in this track. Musgraves has made similar comments about her own life and career, particularly regarding being a country artist. She talks about the mistakes and flaws everyone makes and has and shows everyone that it’s okay not to be perfect or liked by all.

Related: Feel confident with these songs about knowing your worth.

This ode to privately drinking tea with a special someone was written for No, No, Nanette, a musical comedy from 1924. Doris Day’s version for the 1950 production of this musical is among the most popular releases. Tommy Dorsey’s instrumental version, ‘Tea For Two Cha Cha,’ was also a hit, especially in the United States.

The protagonist of this track misses Donna, who is a past lover no longer in his life. He laments that tea time will be different without her. It seems that the two used to meet for tea every day, which explains why this afternoon ritual is now ruined for him.

Related: Missing someone? Listen to these songs about lost lovers.

When I Take My Sugar to Tea – Nat King Cole

The narrator of this classic piece doesn’t want his high-society girlfriend to meet his lower-class friends. He avoids them by taking her to tea rather than his regular gin mill, where his friends apparently hang out. The song is written by Thomas Hischak, who wrote another song from the perspective of abandoned friends.

Tea and Sympathy – Jars of Clay

This song has a protagonist who fears his romantic relationship will become stale and comfortable. He doesn’t want to only talk about mundane things with his special someone over tea like a regular platonic friend. However, it seems that their relationship has changed and is indeed moving in this sad direction.

Lorraine Bowen loves someone for bringing her a cup of tea in bed here. She also seems to appreciate the tea and waking up because she got to see someone special: “When waking up is something I normally dread, but this cup of tea was made for me by you.”

Related: If you liked this song, you’d enjoy these songs with morning in the title.

Tea for the Tillerman – Cat Stevens

Cat Stevens may be talking about a happy day in this track. He talks about someone bringing things to various people and children happily enjoying a nice day by playing and having fun in these brief lyrics. It is also possible that the song references other tracks on the same album it appears on.

Related: Cheer up with these happy feel-good songs.

The narrator here seems to be a young man who can’t face that someone special is no longer in his life. To get his mind off his discomfort, loneliness, and the change he has to endure, he develops a tea ritual that he focuses on too extensively.

Related: If you’re dealing with changes, you’ll like these growth songs.

This 2008 song was inspired by a real-life trip to Beijing in 2007, which involved visiting a bar where a large group of young women sang karaoke. It appears it was a wild night that wasn’t soon forgotten.

Related: Need something stronger than tea? Here are the best songs about liquor.

Here’s a lovely track full of metaphors. It talks of a close platonic relationship that is strong enough that constant attention is not required for it to survive or even thrive. Both parties seem confident in their friendship, even if one of the two would rather that things move in a romantic direction.

Related: Check out these songs about your best friend.

For the Price of a Cup of Tea – Belle and Sebastian

This piece was derived from an old track called ‘The Olympian Boy’ with a new chorus and was also inspired by purchasing a cup of tea. It seems to be about a young woman who moves to a new area and is trying to find her place there. Someone tries to advise her on making it without feeling lost or discouraged.

This song is quite abstract. Nonetheless, it seems that a distressed woman is calling someone named Willie—possibly her husband—in for tea and doesn’t know where he has gone. The song shows listeners what it feels like to be distressed and confused.

Blake Shelton sings of the beginning of a romance and the uncertainty that comes with it here. The track went Gold seven weeks after its release. This made it the fastest country track released by a male artist to reach that level.

The protagonist here has feelings of distrust and awe when faced with a particular woman: “My cup of tea doesn’t taste the same when she’s with me.” He seems to admire her uniqueness but also wonders if she’s using substances to act differently from others and doesn’t trust her as a result.

The narrator here is begging for some money. It seems he wants to buy a cup of tea or some substance to help him get his mind off his lack of funds. This is a great example of a reggae track and was released by Dillinger in 1980.

Bring Me Coffee or Tea – Can

This track was designed to release tension after a tense album. Middle Eastern musical influences also contribute to its relaxing sound and theme. The album explores the relationship between lightness and darkness and how they cycle with each other.