19 Songs about Tennessee, the ‘Volunteer State’ 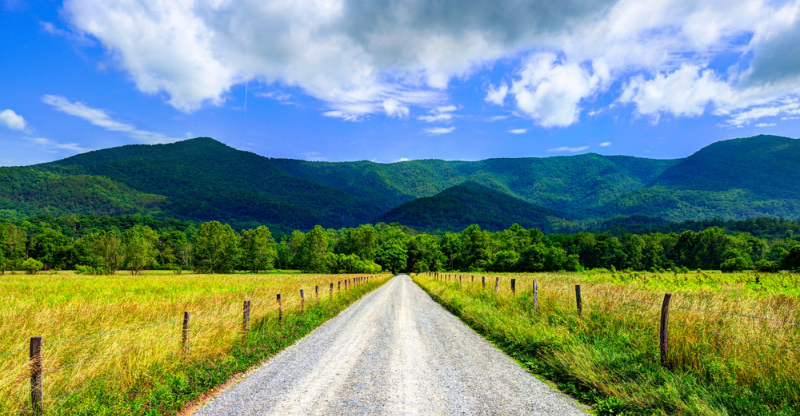 Tennessee has long been a hub for a wide range of legendary musicians. From the bustling streets of Nashville to the smoky, dim-lit bars of Memphis, many country, rock, and blues artists call Tennessee home. This country music-inspired playlist has a wide range of songs about Tennessee dealing with homesickness, starcrossed lovers, and growing up in the south.

Released as the second single on her 1981 album, Cimarron, Emmylou Harris sings about her one true love in ‘Tennessee Rose.’ Reaching national fame at a time when men dominated country music, she became a pioneer for future female country artists, including Reba McEntire, Shania Twain, and Martina McBride.

Part of the soundtrack to her movie Rhinestone, the song is about a girl who moves to New York to become a famous singer and misses her home state terribly. Though the movie also starring Sylvester Stallone didn’t do well at the box office, Dolly Parton’s music used in the movie performed well on the charts.

The story of this song plays out lyrically like an epic as Johnny Cash reminisces about his valiant stallion, nicknamed the “Tennessee Stud.” Spanning the years 1825 to 1844, Cash sings about adventure, close calls, and his ride back to the great state of Tennessee when it’s time to settle down with a woman.

Alabama’s ‘Dixieland Delight’ is legendary in the country music industry. Contemporary artists love referencing the song in their own singles they release. Songwriter Ronnie Rodgers, who also wrote for country artists like Tanya Tucker, wrote the song while driving down the backroads of Tennessee on the way to pick up his then-girlfriend. He eventually cut an acoustic demo of the song for Alabama to take a listen to when they were searching for new material.

Originally released by country singer David Allen Coe in 1981 and covered by George Jones two years later, Chris Stapleton’s version of the country classic ‘Tennessee Whiskey’ is perhaps the most popular rendition of this song. A love song at its core, the lyrics detail a woman rescuing a man from a destructive lifestyle. After performing the song on the CMAs, Stapleton sold over 131,000 digital downloads.

Related: See our top picks of songs about alcohol.

This single shot Marc Cohn to instant fame in the 90s. Though he ultimately became a one-hit-wonder, ‘Walking In Memphis’ is still a popular song. It has been re-recorded many times by artists like Cher and is a popular request song at live music venues. Cohn found inspiration for this song at a rustic restaurant outside of Memphis called the Hollywood Cafe. He sat in with a talented musician named Muriel on a whim that night, and the encounter had a profound personal effect on him.

Dolly Parton grew up poor in the rural parts of east Tennessee. Though her family often didn’t have enough food, she has always carried fond memories of her childhood growing up in the mountains. She sings about that fondness in ‘My Tennessee Moutain Home.’ This single became the title of her 1973 album, which centered around her pride in being a “mountain girl.”

‘Rocky Top’ is a classic bluegrass song in honor of Tennessee belted out by Tennessee Volunteer fans at every home football game. Many country artists have covered the infectious tune, including Dolly Parton and Conway Twitty. In 1982, ‘Rocky Top’ became one of Tennessee’s official state songs.

Back Where I Come From – Kenny Chesney

This early single by Kenny Chesney is full of lyrical praise for the southern culture he was raised in. Hailing from small-town Tennessee, he mentions going to church, making an honest, humble living, and spending leisurely time by the riverbank. Though Chesney would go on to become one of country music’s biggest stars after this release, he has never forgotten where he comes from.

Back to Tennessee – Billy Ray Cyrus

Billy Ray Cyrus penned ‘Back to Tennessee’ after realizing he’d be returning to his home state to host a singing competition on Nashville Star and film for Hannah Montana. It was featured in Hannah Montana: The Movie, his film alongside his pop star daughter Miley Cyrus. Several of his songs during this period charted alongside his daughter’s hits, including Billy Ray’s ‘Ready, Set, Don’t Go’ and Miley’s ‘The Climb.’

This cheeky song pokes fun at Nashville culture by pointing out the city’s duality. Its stark transformation from the infancy of the Ryman, an early music city staple, to the current culture featuring pop-influenced glitz and glamour similar to Las Vegas is at the forefront of this creative single.

Nashville Without You – Tim McGraw

Singing about how Nashville wouldn’t be the same without his lover there, ‘Nashville Without You’ appears on McGraw’s highly praised 2013 album, Two Lanes of Freedom. Other popular songs on the album include his hit single, ‘Truck Yeah.’ The record represented McGraw’s yearning to get back to his roots and produce real country music.

Maybe It Was Memphis – Pam Tillis

Country superstar Pam Tillis held onto ‘Maybe It Was Memphis’ for several years before finally releasing it with her label Arista in the 90s. A song featuring the protagonist reminiscing about a former lover, it has become a popular number to cover by female singers appearing on shows like American Idol and The Voice. Carrie Underwood, Lauren Alaina, and Danielle Bradbury have covered the tune in various singing competitions.

One of Ronnie Milsap’s later releases, ‘Smoky Moutain Rain’ was the only single off a greatest hits album. Even though Milsap already had several hits under his belt, this tune became one of his most popular ones. It is one of Tennessee’s official state songs, and Rolling Stone has ranked it as one of the greatest country songs of all time.

The Wrong Side of Memphis – Trisha Yearwood

Released in 1992, Yearwood sings about moving from Memphis to Nashville to pursue a singing career in country music. But after moving, reality sets in, and the protagonist realizes there’s a dark side to the country music capital. The song doesn’t follow a conventional country music formula. It has a drop D tuning, a darker overall feel, and a nontraditional lyrical structure.

Grateful Dead band lyricist Robert Hunter titled this tune ‘Tennessee Jed,’ but he wrote it while going to Barcelona, Spain. Though the Spanish music he heard while vacationing abroad initially influenced the tune, its composition and instrumentation are pure Americana. Written about a down-and-out protagonist who wishes he could go back in time to his childhood spent in Tennessee, it is speculated among Dead Heads (loyal fans of the band) that it is autobiographical in nature.

Written in part by Darryl Worley himself, the country musician sings about growing up in the south in his song ‘Tennessee River Run.’ Focusing on days spent by the water enjoying the sun, grilling out, and taking time to relax, he sings about staying by the river forever as his weekend comes to a close and reality inches closer.

George Strait joined forces with country music icon Alan Jackson for this award-winning single about the death of traditional country music. In the lyrics, both Strait and Jackson reference the lack of steel guitars and fiddle-playing in modern country hits, with rock n’ roll taking over as the genre’s primary contemporary influence.

Down in Tennessee – John Anderson

With other hits like ‘Straight Tequila Night’ and ‘Seminole Wind,’ John Anderson’s ‘Down in Tennessee’ is pure “heartbroke” country. The song’s story marks the end of a complicated relationship with the protagonist, unsure of how he will move on. Anderson released this single in the 80s, and country singer Mark Chesnutt later covered it in the 90s.