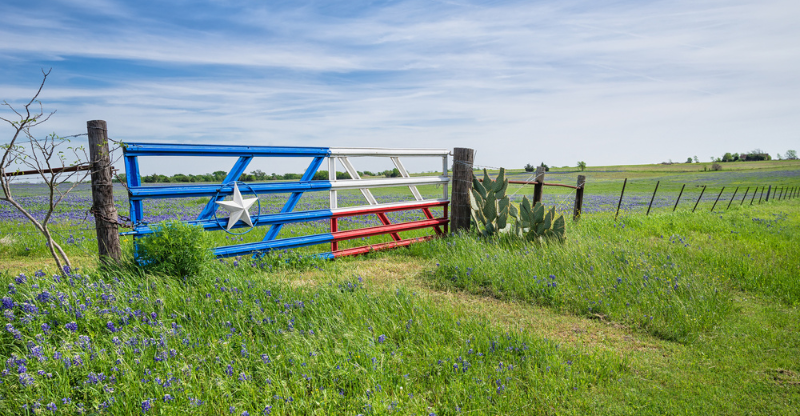 Texas is the second-largest U.S. state in area and population – over 29 million people live within its borders, and it’s home to many ecosystems, from forests to marshes to deserts.

The “Lone Star State” has been the subject of numerous pop culture moments throughout history, and music is no exception. Most Texans have a lot of state pride that you’ll undoubtedly hear in these songs about Texas. Check out this playlist to get a little taste of Texas!

This song drew so much attention to questionable activities in Texas – especially the Houston and La Grange areas – that businesses had to shut down. The distinctive guitar fuzz sound in the track was created by tube distortion. The simplicity of its two chords also helped it to stand out.

Related: This song features on our playlist of best rock and roll songs.

‘Texas Sun’ brings the listener along on a sunny and nostalgic trip through Texas. It also talks about how warm and comforting the Texas sun is. The track has an overall mellow sound and a powerful climax that adds appeal.

Related: It’s hot in Texas! Cool down with our songs about the sun list.

This song was written and first released by Guy Clark in 1975. Johnny Cash released his version the same year on a single album of the same name. The song finds its narrator in Texas in 1947 at a train station. He describes the trains going by from a boy’s perspective and wonders what everyone is making a fuss about when a powerful, new modern train suddenly passes through and leaves its mark on everyone present.

Related: Check out more songs about a train.

Kacey Musgraves reflects on the changes that fame had brought to her life in this track and realizes that there have been times when she “got too big for (her) britches.” However, she also understands that she is still a cowgirl who will always think of Texas and her hometown as her home.

Related: If life keeps changing, see our playlist of songs about life changing.

All My Exes Live in Texas – George Strait

In this track, George Strait explains that he loves Texas but has to live in Tennessee instead. Why? Because he broke too many hearts in his home state. Texas native Sanger D. “Whitey” Shafer and Lyndia, his fourth wife, wrote the semi-autobiographical track; all of Shafer’s exes do live in Texas, but he didn’t move to Tennessee to avoid them.

Related: This song is on our list of easy country karaoke songs.

Iggy Pop sings of the heat present on a Houston, Texas, night in this track. He doesn’t seem to mind, as he was happy to come to Texas and leave the cold winters and brutal winds of Chicago behind: “My brain is tired of the wind. Chicago winters just do me in.” He also highlights how Houston has NASA to be proud of.

Related: Travel to our playlist of songs about Chicago.

Texas (When I Die) – Tanya Tucker

This was a Buddy Holly B-side release before Tanya Tucker covered it. Tucker’s version hit number five on Billboard’s Hot Country Singles chart in the United States—it also hit number three on Canada’s RPM Country Tracks chart. The narrator doesn’t know if they will go to heaven when they die, so they hope they can at least go to Texas, as no other state holds their heart in the same way.

The protagonist of this track has a hard time accepting that his romantic relationship is over. His girlfriend moved to Austin, Texas, and changed her phone number, but he still is in denial. He hopes he is leaving a message at the right number when he calls to tell her he still loves her.

Related: Here are the best songs about long lost love.

Luckenbach, Texas (Back to the Basics of Love) – Waylon Jennings

The narrator here says that women and guitars are the only things that matter in life. He tells his love—presumably his wife—that their affluent lifestyle is getting both of them down. He thinks they should go back to basics in Luckenbach, Texas, where the simple life may make them happier.

Songwriter Van Stephenson was inspired by a run-in with an old flame while writing this song. The lyrics find its protagonist haunted by a light-haired, blue-eyed ex-girlfriend, who he apparently hurt. The song talks about the regret that comes with breaking someone’s heart.

Is This the Way to Amarillo – Tony Christie

Neil Sedaka and Howard Greenfield wrote this track. The protagonist wants to go back to Amarillo, Texas, where the woman he loves lives. The “sha-la-la” chorus lyrics were originally intended to be placeholders but likely contributed to its success. The song is one of many successful tracks to talk about Amarillo.

Too Far From Texas – Natalie Maines and Stevie Nicks

Stevie Nicks met Natalie Maines of The Chicks through Sheryl Crow, eventually leading to this collaboration. In the lyrics, a protagonist is waiting and wishing for the man she loves. He said he’d come back to her one day, but she is losing hope. It also seems like there’s a third party involved since she says someone else is there to love him where he’s at.

This was the theme song for Austin City Limits. The song reflects the real-life homesickness that Texan Gary P. Nunn felt while spending time in London. He yearned to be home with his musician friends rather than feeling out of place in the city.

Related: Head over to our London songs playlist.

Jimmie Davis first recorded this song way back in 1934, before Willie Nelson covered it in 1968. The narrator talks of the countries that Texas forefathers came from and says that, while some may want to go back to visit them, they will not compare to Texas and its beauty.

Gary Clark Jr. grew up in Austin, which is a part of Travis County, Texas. This song finds Clark serving as a protagonist who has a brush with the police. He is arrested in Travis County and isn’t too happy about it. It isn’t entirely clear what he did to get put in jail.

Related: Don’t get locked up! You won’t be able to listen to the best prison songs.

Pat Green sings an ode to the songs he sings and hears about Texas in this track. He says that every Texas-themed song he hears on the radio makes him homesick. He wishes he could go back to his home state, specifically mentioning “San Antone” (San Antonio).

This song’s narrator sings about notable things to do and places to see in Texas, many of which are popular with locals and visitors alike. It serves as a musical list of things to see and do when you visit or move to the state.

Ray Wylie Hubbard makes it clear that Texas and Texans are the best compared to the rest of the United States in this track. He is proud to be a Texan and even has the look and sound down to a T. He realizes he probably wouldn’t be popular as a musician elsewhere, anyway.

Deep in the Heart of Texas – Gene Autry

This classic Western track dates back to the 1940s and speaks to the beauty and charm of Texas. Perry Como first performed this track with Ted Weems and his Orchestra, which June Hershey penned. The song was deemed to be so catchy that it was banned in the US during World War II to ensure that factory workers kept their focus on work! This song is still loved by Texans—sing this one in Texas, and you’ll likely hear people clapping along.

This track focuses on the fiddle to pay homage to classic Texan country music. The song was a B-Side release and wasn’t expected to be the big hit that it became for Alabama. Murry Kellum and Dan Mitchell wrote the song; Kellum died six years after its release in a plane crash at the age of 47.

George Strait sings as a rodeo cowboy reviewing his life in this track. It seems that he has had some disappointments and heartache along the way. The song became very well-known, even though it never charted. A commercial for a delivery service actually inspired the track and its title.

Related: Time to get up and enjoy these songs about morning.

Is Anybody Goin’ to San Antone – Charley Pride

This became Charley Pride’s third number one single in a row on the US Country charts–it charted for 16 weeks total. Pride sings as a man who wants to go anywhere but where the woman who hurt him lives. Leaving and traveling will help get his mind off the fact that he’s hurt and alone.

Related: See our list of songs about someone hurting you.

‘Texas Flood’ appeared on an album of the same name that gave Stevie Ray Vaughan fame and success. Vaughan sings as a stressed man trying to call his love after flooding in Texas. The phone lines are down. Vaughan died only seven years after the song’s release in a helicopter crash at age 36.

Related: Texas weather is unpredictable. Prepare yourself with these songs about the weather.

This is an ode to Dallas, Texas, highlighting the city’s dark side. It compared the city to a woman who hurts you when you’re down but treats you well when you are doing well. Jimmie Dale Gilmore and The Flatlanders are a band founded in Texas.

While some may consider this an anti-war song, it’s seemingly more of a story of a soldier on the front lines missing home. He’s afraid he is going to die before he gets back home to Galveston, Texas. For now, he keeps dreaming of his hometown.

Related: Check out similar songs on our playlist of songs about soldiers.

Miles and Miles of Texas – Asleep at the Wheel

Here’s a track that tells the story of a man from Louisiana who decides to travel to Texas. He finds love there and decides to become a rodeo cowboy and permanently live in his new state. Red Steagall covered the song in 1976.

This is one of Ernest Tubb’s most famous tracks. It was written by Tubb’s nephew, Quanah. In the lyrics, Tubb is enchanted by a romantic partner he is dancing with. He tells her that he feels so great with her that he could dance across the whole state of Texas with her.

This is Little Texas’ signature song. It’s a true ode to the state that decides God must have loved Texas to give it its unique geography and other interesting characteristics. An album intro track precedes ‘God Blessed Texas’ and includes part of the track.