18 Songs about the End of the World and the Apocalypse 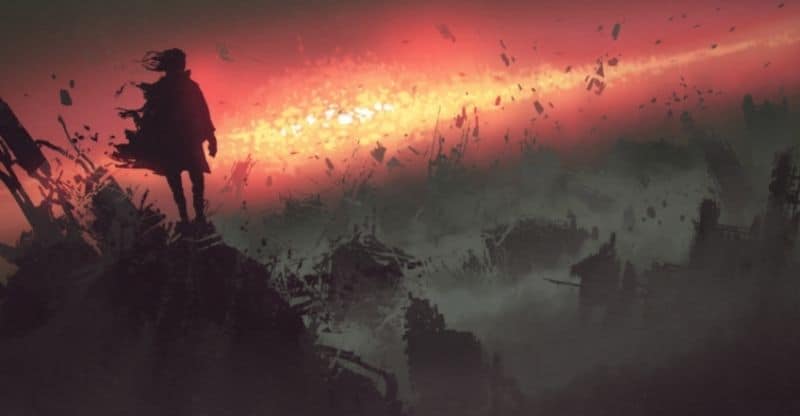 Music allows people to express their fears about any topic, and the end of the world (or ‘the apocalypse’) is no exception.

So, here are some of the best apocalyptic songs that tackle the tough topic of death and impending doom. Don’t worry, it’s not all bad! Some artists took it upon themselves to create unforgettable songs that will keep playing even after you’re long gone.

Michael Stipe wrote this song as a stream-of-consciousness. He wrote what came to mind, what he saw as he flipped through channels, and remembered a dream where everyone had the initials L.B. As random as this song may seem, the events point to the fact that the world has problems, and sometimes, those problems are big enough to make it feel like the world is ending. Do you dance or tap your foot to this song? R.E.M. was surprised that this song created a party vibe rather than despair!

Many people had fears that the year 2000 would cause computer problems and maybe even end the entire world. Prince didn’t like that so many people were fearful, so he created an upbeat song that left people feeling hopeful. Even though it has vibes good enough to be played at parties, it does address dark topics such as mortality (“parties weren’t meant to last”) and how the US was stashing nuclear bombs in the ’80s (“everybody’s got a bomb”). But don’t worry about that. Just dance into oblivion.

This song is a narrative about how the earth only has five years left because it ran out of natural resources. The first verse shows that suddenly everything matters to the singer, and his brain starts hurting because he is trying to remember every detail. The second first shows society falling apart because of the impending doom, except for that one apathetic person who was chilling and having a milkshake. The song comes from the concept album The Rise and Fall of Ziggy Stardust and the Spiders from Mars and has a separate narrative based on that story.

The End – The Doors

The specific end this song is talking about isn’t straightforward and is open to each person’s interpretation. Some say the beginning of the song is Jim Morrison saying goodbye to his girlfriend, but even Morrison said, “It could be almost anything you want it to be.” Most people interpret the song to be talking about the end of life. The song sounded different at almost every live performance because they would ad-lib the lyrics and make the song a little longer every time.

Have you ever been so bored you ask for death? Sure it’s a bit hyperbolic, but that’s how Morrissey feels in the song. He describes Sundays as “silent and grey,” and every day is like that where he lives. It’s so bad that he wants the end times or a nuclear bomb to arrive and put an end to it. Morrissey got inspiration from the novel On the Beach by Nevil Shute, which is about people waiting for a nuclear war to take them out.

This song talks about how humanity has allowed bad things to happen. The message’s presentation is interpreted in different ways. Some see it as God asking Jesus what he saw on the earth and interpret the last verse as Jesus going back to the earth to help people. Others see it as a father talking to his son, and his son is a child who is witnessing the horrors of humanity and decides to make the world a better place when he grows up. Either way, the song talks about violence and climate change but has a hopeful message about the future.

This song is a love story written as a sci-fi story that can have a slightly different meaning. Leaving earth and heading to Venus is a metaphor for falling in love and making it official. (Remember, Venus is the god of love.) The couple intends on being together forever, which is why they say they’ll miss the earth. If you look at the lyrics a bit more literally, you may assume that humanity is leaving earth due to bad conditions and are searching for a new home, starting with Venus, and are hopeful they’ll be accepted. This one is also a favorite karaoke pick.

The red rain in the song may be a metaphor for fear. Peter Gabriel wrote this song because of recurring dreams he kept having that scared him, usually involving blood or red wine. The second verse of the song may be alluding to burying feelings deep inside, so it won’t appear that you’re afraid. The third verse talks about letting those feelings show and not being ashamed of the fear. It’s a great reminder to stop hiding your feelings because they’ll eventually show themselves on their own. Some may interpret the song to be talking about an apocalyptic future and not fearing what will happen.

Dancing With Tears In My Eyes – Ultravox

People in the US were afraid of a nuclear war in 1984 when this song came out. This song is about the apparent war that would probably break out soon, and all there was to do was dance with tears in your eyes. “We drink to forget the coming storm” shows that the singer doesn’t want to be sober when the war happens because he knows it will be terrible. The singer mentions driving home for the last time and seeing another man crying about the end of the world, showing that people were anxious about the world’s future.

‘London Calling’ is a dismal song listing several ways the world could end. Joe Strummer got the ideas for this song from several news reports he read, one of them being about London potentially flooding due to the Thames River. Other worries that contributed to the song were the Cold War, starvation, and climate change. The singer says he doesn’t fear a nuclear war because “London is drowning” and he lives by the river. It shows frustration and a bit of apathy toward the bad in the world—why worry about that bad thing when this bad thing will affect you?

John Fogerty said this song was about an upcoming apocalypse, but it was inspired by The Devil And Daniel Webster, where a hurricane destroys a town. The happy tune will have you tapping your foot as you hear about hurricanes looming over you, everything getting destroyed, and lives being lost. The singer’s attitude is bleak in the song as he warns you not to go out because you’ll surely die in the weather.

This song was inspired by US President Ronald Reagan and his religious belief that Jesus would return to earth after a nuclear war. The two tribes refer to the US and the Soviet Union and how their cold war was putting the safety of the whole world at risk. The song didn’t perform well in the US, even though the song was about them. Perhaps they didn’t like the scrutiny? However, it was #1 in the UK for a couple of weeks.

“Please just give us an apocalypse and end it already!” That’s the best way to describe the desperate lyrics in this song. It’s scrutinizing world leaders and how they drag out wars and violence, claiming that winning will deliver victory. But, the chase for victory only brings pain and suffering for many, including the earth. “It’s time for something biblical” is asking for the end of the world, or a rapture, or anything that will put a stop to the nonsense.

Madonna and Justin Timberlake urge you to act quickly to achieve what you want in life. “We only got four minutes to save the world” is a hypothetical situation that emphasizes the importance of acting now. If the world ends in four minutes, you shouldn’t wait until the last one to get started. This song urges you to treat your life with the same level of urgency because you can’t achieve your dreams by waiting for tomorrow.

This spiritual song is unlike Bob Marley’s reggae songs. It only uses an acoustic guitar and lacks the typical reggae style. The song is based on Rastafarian beliefs that black people will one day be freed from all suppression and be released back to Ethiopia. “Emancipate yourselves from mental slavery” is a quote from Marcus Garvey in 1937. The song is meant to bring peace and comfort, which is why Marley says they shouldn’t fear atomic bombs because time will keep on going.

We Will Become Silhouettes – The Postal Service

You’ll forget how dark the lyrics are when you listen to this seemingly cheery song. The song talks about life after a nuclear explosion. It’s not safe to go outside, and the singer has been trapped indoors for a long time. The silhouettes refer to the phenomenon that happens when you’re standing by an atomic bomb. Your body goes away, but your shadow will still be there. There doesn’t appear to be any deeper meaning; it’s simply a happy song about a bad ending.

The Mayans predicted that the world would end in 2012, and this 2010 song has the same vibe as Prince’s ‘1999.’ It says that even though it’s supposedly the end of the world, it’s not too late to follow your dreams or have fun. The lyric “it ain’t the end of the world” suggests that the singer didn’t really believe that 2012 would be the end, so it comes off as a somewhat sarcastic song. Still, the positive message is an important one to remember.