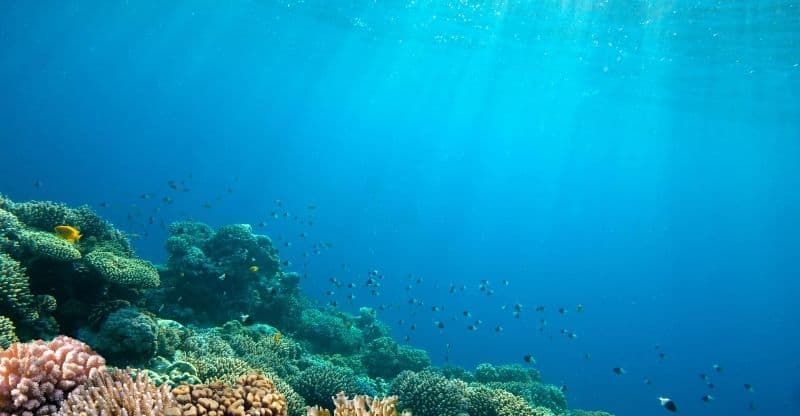 Oceans cover more than 70% of the Earth’s surface. Not only do they serve as the world’s largest habitat, but they also help to regulate the climate.

Like those other smaller bodies of water (seas and rivers), the ocean is used widely in songwriting, mostly metaphorically.

While this article can’t promise to go as deep as the Mariana Trench, we attempt to plummet the depths of popular music to find you the best songs about the ocean by some of the world’s best songwriters. Let’s dive in.

‘Only the Ocean’ – Jack Johnson

Jack Johnson’s love song to the ocean is one of the highlights of his career. The ocean doesn’t love, doesn’t hate, and doesn’t judge him. It’s his happy place where he can be at one with himself.

‘An Ocean Between the Waves’ – War on Drugs

Here’s a stream-of-consciousness song (that’s very ‘Dylanesque’ in parts) from the peculiarly named band, War on Drugs. I don’t know what the song is about, but it involves “an ocean between the waves,” so it deserves its place. Just about.

Another gorgeous song from those indie-folksters, Fleet Foxes. Writer Robin Pecknold was quitting smoking when writing this, and the nicotine patches, according to an interview with NME, were giving him “insane dreams.”

This performance at Madison Square Gardens sees Led Zep at the height of their creative powers. Hard rock doesn’t come much better than this (hence why Dave Grohl is such a fan, as well as The Beastie Boys who sampled this song on their track, ‘She’s Crafty).’

Here’s a lesser-known Neil Young song he did with Pearl Jam for the ’90s ‘Mirrorball’ album. It’s easily the best song on the album and one of the highlights of Young’s ’90s period. It shows you what can be done with just four chords (played throughout the whole song) when you have great lyrics and sing from the heart.

This song featured on Coldplay’s ‘Ghost Stories’ album, which was written mostly about Chris Martin’s breakup with his then-wife, Gwyneth Paltrow. It’s a song about needing to embrace the dark times in life (“you’ve got to find yourself alone”) to be able to find the good times again.

Related: Go to our playlist of loneliness songs.

‘Ocean Rain’ – Echo and the Bunnymen

Liverpudlians Echo and the Bunnymen are one of the ’80s best-kept secrets and produced a decent body of work (check out ‘The Killing Moon’ from our moon songs playlist for one of their best.) Here, the ocean is used as a metaphor for a toxic relationship (“My hurricanes have brought down this ocean rain”).

Related: Check out our playlist of storm songs for more on the subject.

The oddly named ‘Ocean Breathes Salty’ is one of the finest songs about losing someone to death you’ll ever hear. But, like many of these songs, it has little to do with the oceans (Atlantic, Pacific, or otherwise) and more to do with living, specifically what’s after life. He argues you shouldn’t live in anticipation of an afterlife, or you’ll miss out on living.

This water-themed song from Lou Reed was inspired by Reed’s experience of ECT (electroconvulsive therapy) that he received in his youth.

The idea for this song came from a time lead singer Wim Butler took a boat trip with his family on the 4th July. They suddenly got surrounded by fog and used the noise from a foghorn to find their way home.

Here, frontman Richard Ashcroft compares life to an ocean. Life has “too much commotion, too much emotion” for him to bear.

‘Once Upon a Time There Was an Ocean’ – Paul Simon

Here’s a typically deep song from master songwriter Paul Simon. It’s a song about change and the passing of time, and how “something unstoppable” (our lives, the physical world, etc.) are “set into motion” but we are helpless to stop it. It finishes with Simon at the funeral of a family member.

This unique song, co-written by Icelandic poet Sjón, is sung from the ocean’s point of view. They wrote and performed it for the 2004 Athens Olympics Opening Ceremony.

Here’s Justin Timberlake’s attempt to put his own spin on the electronic rock sound of Radiohead. It appears as the last track on his 20/20 Experience album.

‘How Deep is the Ocean?’ – Diana Krall

This gorgeous jazz standard was written in 1932 by Irving Berlin. It was first made famous by Jack Fulton but has been sung by just about everyone since, from Frank Sinatra to Bob Dylan, not to mention various instrumental versions from the likes of Ben Webster and Chet Baker. Here’s a modern interpretation by Diana Krall.

This song was the world’s first glimpse of Billie Eilish. The “ocean eyes” belong to a guy whose stare she’s captivated by.

No list of songs about the ocean would be complete without The Beatless novelty song, ‘Octopus’s Garden’ about an Octopus in his hideaway beneath the waves.

Ok, it mainly refers to the sea, but there is a line about oceans (“lies beneath the ocean waves.”)

You could also mention their other number with drummer Ringo Starr, ‘Yellow Submarine, but I’ll spare you that one.