17 Best Songs about the Radio to Tune Into 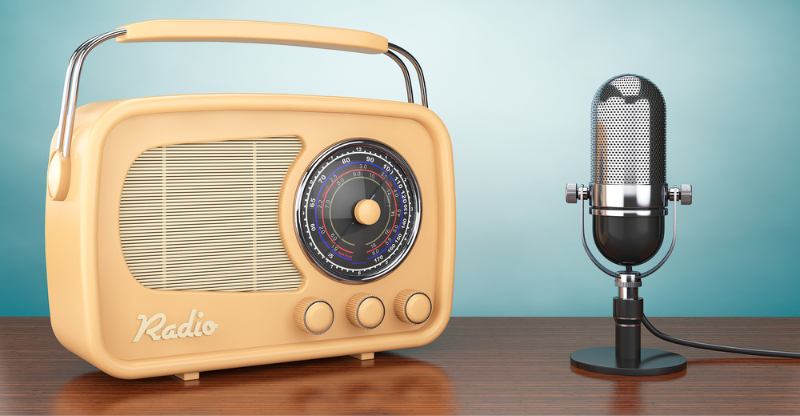 Musicians have always had a unique relationship with the radio.

From a business standpoint, radio is (or at least was before the internet came along) a gatekeeper for artists that can make or break their careers.

But there’s more to it than that. Back in the day, the radio also served to inspire wannabe musicians who lived relatively sheltered lives. It served as a window into an exotic world and captured the imagination of everyone from Paul McCartney to Freddy Mercury to Lou Reed. As you’re about to hear, many of these songs celebrate a love for this old faithful friend.

So without further ado, here’s a wide-ranging list of songs about the radio. Time to twist that dial and tune in :-).

“I can hear the merry gypsies play.” Northern Irish songwriter Van Morrison included ‘Caravan’ on his critically acclaimed Moondance album in 1970. The folksy song tells the story of traveling gypsies and the “merry” music they play. The tune is a tribute to time spent traveling on the open road feeling wild and free.

Related: Take a ride over to our list of the best songs about travel.

One of punk royalty Lou Reed’s most personal songs, he confessed in The Velvet Underground’s album liner notes that ‘Rock N Roll’ is “about me.” In his younger years, the musical genre represented an escape from reality as he felt more and more like an outcast. He would spend his days listening to the radio, waiting for his favorite rock numbers to play.

Related: This song made it to our list of the best 70s songs.

Turn Your Radio On – Grandpa Jones

This vintage tune dates back to the 1930s when it was first released by Lulu Belle & Scotty and Five String Banjo. Written by songwriter Albert E. Brumley, Grandpa Jones released his own version of the song in 1966 on his album Grandpa Jones Remembers the Brown’s Ferry Four.

Drummer Roger Taylor wrote ‘Radio Ga Ga’ as a commentary on the rise of commercialism and music videos in the 1980s. He noticed the increasing popularity of MTV and the same few songs being played repeatedly on radio stations. He felt this visual-centric state of music would hurt the quality of music being released.

Penned by frontman Jonathan Richman, ‘Roadrunner’ is a love poem written as a tribute to Massachusetts. Many state-specific references are included in the song, including a nod to Route 128, one of Massachusett’s most-driven highways. The garage-rock tune released in 1977 only features two guitar chords throughout the song.

Related: Feel the burn with this great exercise music.

Elvis Costello’s ‘Radio, Radio’ is an honest criticism of the late ’70s radio protocol. In the 1970s, radio experienced a dramatic shift, with only a handful of companies owning most of the stations. This caused them only to play a select few artists. Big-name artists from Costello to Tom Petty and Queen spoke out about it in several of their songs.

Though ‘Radio Song’ started as an acoustic-based tune, it had developed a distinct “funk” sound when R.E.M. finished recording it. Because of this, they decided to bring in well-known rapper KRS-One to guest appear on the track and lay down some rhymes. ‘Radio Song’ appears on their 1991 album Out of Time.

Frontman Joe Strummer was a big fan of the early rap scene in New York City, which gained significant ground in the 1980s. Strummer wrote ‘Radio Clash’ as a tribute to many early rap artists who are now considered legends, including the Sugarhill Gang and Grandmaster Flash. The song is featured in season 2 of the Netflix show Stranger Things in the episode titled ‘Will the Wise.’

A vintage rockabilly song featuring a dancing bassline and hints of early rock and roll, L.C. Smith and His Southern Playboys sing about nights spent listening to the radio with their friends. Though the most streamed version of ‘Radio Boogie’ contains country and rock elements, the first version they recorded of the tune was strictly bluegrass.

Do You Remember Rock and Roll Radio? – Ramones

The End of The Century album, which ‘Do You Remember Rock and Roll Radio?’ is featured, represented a new sound for the Ramones in 1980. In-demand producer Phil Spector worked on the album with them and helped them develop a more radio-friendly sound. The song is a tribute to all the music of the ’50s and ’60s that influenced the Ramones early on.

Long before radio mixed with corporate-style record labels, border radio stations sprang up with a fury in the 1930s. Originating on the Mexican border to the U.S., the high-powered signals could overpower regulated American markets and play whatever they wanted. This caused people to tune in worldwide and listen to many talented artists they’d never heard of otherwise.

A tribute to radio stations known as “Border Blasters” that began popping up in the 1930s along the Mexico-U.S. border, these stations weren’t regulated like America’s, so they could distribute their signal far and wide. The “call letters” for the stations in Mexico all began with the letter “X,” hence Z.Z. Top’s title, ‘Heard It On The X.’

“My radio, believe me, I like it loud. I’m the man with a box that can rock the crowd.” Rapper LL Cool J was only seventeen at the time and grew his fanbase in the mid-1980s when he released ‘I Can’t Live Without My Radio.’ The song is a declaration of love to his always handy boom box, which appears in the film Krush Groove.

The WASP (Texas Radio and the Big Beat) – The Doors

Frontman Jim Morrison was known to be very experimental with The Doors’ sound. With ‘The WASP (Texas Radio and the Big Heat),’ he uses spoken word to tell the story of the border blaster radio stations that took Texas by storm in the 1950s. Everyone was tuning into the Mexican radio stations because they weren’t regulated and played many musicians you wouldn’t usually hear on heavily regulated American radio.

Related: Listen to more songs that tell a story.

“Distance has no way of making love understandable.” This melancholy tune leaves lyrics open-ended while communicating an overall message of how painful complicated relationships can be. The protagonist references “radio cures” and “electronic surgical words” as a nod to using music to cope with heartbreak.

Related: Mend your broken heart with these heart break songs.

Guerrilla Radio – Rage Against the Machine

“No shelter if you’re looking for shade.” In this tune from their infamous, The Battle of Los Angeles album, Rage Against the Machine uses their sound as ‘Guerrilla Radio’ to alert the masses of America that they only have the illusion of choice when it comes to politics. Like much of their music, the song is a scathing criticism of failed democracy from their viewpoint.

Related: Fight the power with the best protest songs.

Asleep at The Wheel’s Maryann Price lends her jazzy vocals for the Dan Hicks’ track ‘Canned Music.’ Combining classic country instrumentation, spot-on three-part harmonies, and a bit of cheeky humor, band leader Hicks, offers a few choice words regarding “canned music.” Canned music is a term that refers to lip-syncing words to a song instead of singing live.

More songs about the radio: