14 Best Songs About the Sea 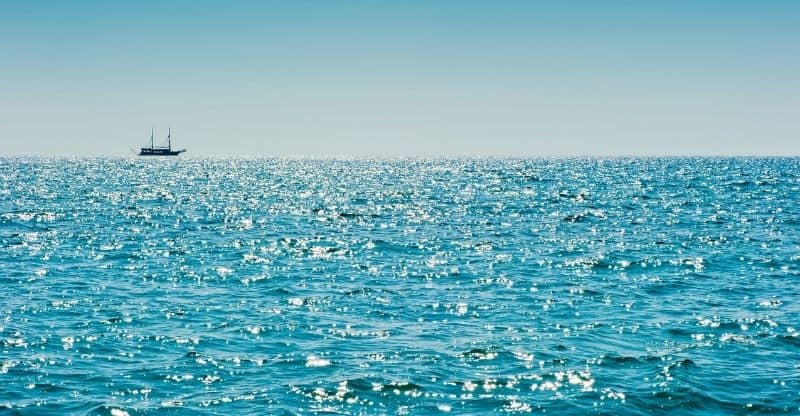 Like the ocean, waves, rivers, or the beach, the sea has been a massive source of inspiration for some of the best songs ever written.

Of course, the sea is rarely used literally and is often used as a metaphor for distance or something deep (often ‘self-knowledge’).

So without further ado, kick off your shoes, breathe in the surf, and enjoy these popular songs about the sea.

We have to start with one of the best songs about the sea, Bobby Darin’s ‘Beyond The Sea.’ This swinging number from the early ’60s perfectly captures the ebb and flow of the sea, and the romantic lyrics are all about “finding love beyond the sea.”

Translated from the French song by Charles Trenet (called ‘La Mer’) that was initially recorded for the Cary Grant movie Every Girl Should Be Married. The film is pretty much forgotten, but the song still gets a fair amount of airplay.

Many artists have covered it – including Rod Stewart and Robbie Williams – but this Bobby Darin version is considered definitive.

‘Across the Sea’ – Weezer

The vastness of the sea, of course, separates people.

In this song, writer Rivers Cuomo receives a letter from a fan in a “small city of Japan” asking all about (“my hobbies, my favorite food, and my birthday”).

The rational side of him rules out it going any further, “I think it would be wrong, I’ve got your letter, you’ve got my song.” But then the next minute he’s thinking about her again and curses himself “for being across the sea.”

‘Sea of Love’ – The National

Here’s one by Brooklyn’s master of dourness, The National.

The humorous video, with the band rocking out in a tiny room, is a tribute to the Russian post-punk band Zvuki Mu and their ‘Grubyi Zakat’ video (where the Russian quartet plays in a confined space, with a kid wandering in and out of frame.)

“I see people on the floor, they’re slidin’ to the sea,” frontman Matt Berninger sings.

Here’s a song about a sailor who’s lost at sea (“You’re a lost sailor, you’ve been too long at sea”). It’s a metaphor for people who are ‘too far gone’ on substance abuse.

It’s likely a reference to band member Jerry Garcia who had a long-lasting ‘habit’ that the band had to endure.

“There’s a price for being free,” the lyrics remind us.

Neil Young has a fondness for the sea, having owned his own schooner (named ‘W.N. Ragland’, after his grandfather) for many years. No surprise then that he also wrote one of the best songs of the sea.

‘Captain Kennedy’ is based on the life of a real person (Captain Louis Kenedy) and the sinking of his schooner by a German U-Boat in World War 2.

The story of this heroic skipper is also captured in the book, ‘The Last Schoonerman’, by Joe Russell.

Of course, while the sea is a thing of beauty it also has massive powers of destruction too, as we saw with the devastating Japanese tsunami in 2011.

The four remaining Beach Boys released this song to help raise money for the 2011 earthquake and tsunami victims in Japan.

The band also added the voice of the late Carl Wilson posthumously to the recording.

Any collection of sea-themed songs wouldn’t be complete without ‘Yellow Submarine’ by The Beatles.

This kids song, written mainly by Paul McCartney, was sung by Ringo Starr. Singer Donovan helped with the line “sky of blue, sea of green.” Many fans believe the “sea of green” line is a reference to marijuana which was prevalent at that time.

Another song by the fab four is ‘Octopus’s Garden’, one of the most famous under the sea songs.

This song was written and sung by a naval submariner (Cyril Tawney) who ought to know a thing or to about seafaring.

The ‘Grey Funnel Line’ is the sailors’ nickname for the Royal Navy. The song’s lyrics are about a sailor leaving home and leaving his loved one behind.

It’s also a song about missing home. He sings “the hardest time in sailor’s day, is to watch the sun as it dies away.”

The title track from the album, ‘Ship Ahoy’ vividly evokes the journey of African slaves being transported in a slave ship to the New World.

The O’Jays were an exceptional band and epitomized the sound of Philly soul. They struck a fine balance of highlighting the world’s woes (being socially and politically conscious) and keeping their funk on, but never appeared preachy.

The chart-topping album also gave us their classic money song, ‘For the Love of Money.’

The final track from their 2015 Kintsugi album, ‘Binary Sea’ refers to the story of Atlas, a Greek mythological figure who is condemned to carry the heavens on his shoulders.

The song is a commentary on our fixation with digital devices and cataloging every moment of our lives via social media etc. The gist of the song is that if we’re so consumed sharing our lives (and proving to others how good everything is), we miss out on experiencing the real world.

“For if there is no document, we cannot build our monument,” frontman Ben Hibbard sings.

‘To The Sea’ – Jack Johnson

Here’s a gorgeous little song that uses the sea as a metaphor for self-knowledge and reaching ‘below the superficial’. It’s rather profound when you understand it.

In the song’s lyrics, Johnson and his son are being pursued by hunters. “It’s me that you wanted, I’ve been right here all along,” Johnson tells them.

He urges his son, “we’ve got to get right down to the sea,” which means seeking the truth. Then, finally, he tells his son, “you’ve got to leave” (to find your truth) but reassures him that “you can always come to me, I’ll give you what you need.”

‘Sinner in the Sea’ – Calexico

This duo from Tucson (Joey Burns and John Convertino) also known as ‘Calexico’ have been making outstanding records for years now. They mix up styles from spaghetti western to Mariachi to surf rock.

‘Sinner in the Sea’ is from their 2015 album Algiers (a neighborhood in New Orleans where they recorded the album) and another prime example of their superb musicianship.

This is a superb bar-room blues with a guitar sound reminiscent of Ry Cooder on ‘Buena Vista Social Club’ – and a hint of Tom Waits to top it off :-).

‘This Is the Sea’ – The Waterboys

The Waterboys, with the brilliant voice of Mike Scott, were a much loved band in the ’80s with hits such as ‘Whole of the Moon’ (one of the best songs about the full moon).

‘This Is the Sea’ is a song about breaking free (“once you were tethered, now you are free”) – and like Jack Johnson’s ‘To The Sea’, one assumes is about self-discovery.

“You don’t need no ticket, you don’t pay no fee,” Scott sings. Because “that was the river, this is the sea.”

‘Wading in the Velvet Sea’ – Phish

In this gorgeous song, the protagonist starts to write a letter to a long lost love, but tosses it into the trash before sending (“all the points I tried to make, are tossed with thoughts into a bin”.)

The song captures the joy and sorrow of reminiscing about the past, comparing it to ‘wading’ in a sea of velvet.

More sea songs (or that have ‘sea’ in the lyrics)