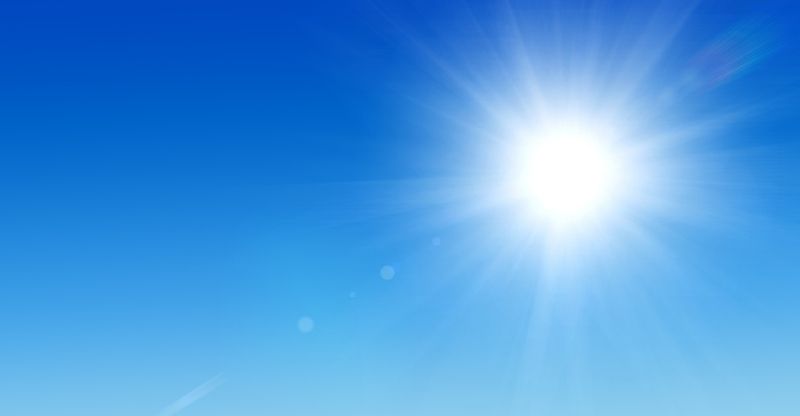 We’ve got a lot to thank the sun for. Life, for a start. But, also some amazing songs.

Like that other celestial body the moon, the sun is used metaphorically (e.g. ‘You are the Sunshine of My Life’) or literally (e.g. ‘Trip Around the Sun’).

So cast aside the dark clouds and listen to some of the best songs about the sun ever recorded.

‘The Sound of Sunshine’ by Michael Franti and Spearhead

Recovering after a ruptured appendix in 2009 (which nearly finished him off), Franti learned to appreciate all the little things again, like the sun shining through his window. Sat in the sun, he felt his body healing.

This experience helped him understand how essential sunlight is for healing. Unfortunately, the sun does not shine every day (and rarely shines in hospital rooms). So he put sunlight in a place where anyone can find it – in this song.

The song was written on the road in 2010 when he was on tour with John Mayer.

‘Set the Controls for the Heart of the Sun’ appeared on Pink Floyd’s second album, A Saucerful of Secrets, and is an early Roger Waters composition.

The lyrics were inspired by a book of Chinese poetry (from the Tang Dynasty), that Roger Waters owned.

It’s notable as it’s the only Pink Floyd song that features all five band members of the band playing together (with both Gilmour and Barrett on guitar).

‘Blister in the Sun’ by Violent Femmes

This great song appeared on the first self-titled debut Violent Femmes album from 1983.

Writer Gordan Gano was only 19 years old when they released it. According to an interview with Gano in Village Voice, the song is about “the strung out feeling that comes from drug abuse.”

‘Blister in the Sun’ gained a cult following and was a favorite on American college radio in the ’80s. It has since been considered a classic of the genre.

Despite never making it inside the top 150 of the Billboard 200 album chart, the Violent Femmes’ debut album earned gold four years after its release and achieved Platinum sales status four years later.

‘Higher Than the Sun’ by Primal Scream

The clubbing drug of choice in the ’90s was Ecstacy, used in illegal raves up and down the British Isles. Whole music genres (acid house, for example) was built around its apparent ability to get the audience ‘loved up’ and dance none stop. Usually with a whistle.

With its ethereal, ‘trippy’ production, ‘Higher Than the Sun’ was designed to approximate the experience of being mashed, even if you were stone-cold sober.

There’s a cheeky little bit at the end. If you listen carefully, you can hear Gillespie at the end say “I get mine for 15’s” referring to the price he paid (£15) for a pill.

‘Trip Around the Sun’ by Kenny Chesney

‘Trip Around the Sun’ is by American country music artist Kenny Chesney (who’s one of the kings of the ‘island rock’ genre – we feature him in our list of beach songs). His songs are always optimistic. He’s totally the guy to listen to if you’re taking yourself too seriously!

Here, he states: “We’re all swimmin’ in a fish bowl / Just floatin’ through the sky / Pulled along by gravity and nobody knows why.” He has a point.

“So let’s drink another beer / Here’s to another year / Let’s take another crazy trip around the sun.”

Not a bad plan there, Kenny.

His fans call themselves the ‘No Shoes Nation’!

‘Who Loves the Sun’ by The Velvet Underground

From their excellent Loaded! album, ‘Who Loves the Sun’ is a brilliantly cheery song about getting jilted.

With his broken heart, everything seems rubbish: “who cares what it does, since you broke my heart.”

Was this a little dig at The Beatles’ ‘Here Comes the Sun’ or even the Beach Boys? The ‘ba, ba, ba, baaa’ harmonies in the chorus suggest so.

It’s one of the only songs I can think of with a cough in it! Listen around the 1 minute mark.

‘She’s Only Happy in the Sun’ by Ben Harper

We all love a sunny day.

Here the sun equates to being high on drugs. As such, this song is about a struggle with addiction that a girl he knows is facing.

There’s a warning, alluding to overdosing: “If the sun sets you free, you’ll be free indeed.”

Ben Harper, a guitarist, composer, and bandleader rose to cult status on the jam band scene in the 1990s, owing primarily to the success of his debut album, Welcome to the Cruel World.

‘Cold Day in the Sun’ by Foo Fighters

Written and sung by drummer Taylor Hawkins, ‘Cold Day in the Sun’ appeared on Foo Fighters’ fifth album, In Your Honor.

Hawkins himself admits: “To be honest, the lyrics suck”!

‘Here Comes the Sun’ by The Beatles

From the Beatles 1969 album Abbey Road, Harrison’s ‘Here Comes the Sun’ is one of the greatest songs about the sun. It’s also his best-known compositions and the most-streamed Beatles song on Spotify globally.

The lyrics are full of positivity and are a celebration of the arrival of spring (“the ice is slowly melting”) and happy to see the back of a “long, cold, lonely winter.”

Here, one suspects the seasons are being used figuratively. The Beatles were coming to an end, and things were fraught between the fab four. So was ‘spring’ the post-Beatles solo career he was looking forward to? Probably.

Harrison wrote it at the country house of his friend Eric Clapton. Harrison was playing truant for the day (he didn’t want to attend a meeting at the Beatles’ Apple Corps). And thank God he did!

‘Island in the Sun’ by Weezer

One of the best songs about the sun (at least in recent years) by indie rock maestros Weezer.

This was the second single from their 2001 self-titled Weezer album (also known as the ‘Green Album’ thanks to the color of its sleeve).

It also garnered frontman Rivers Cuomo will plenty of praise, with comparisons to Brian Wilson.

It nearly didn’t make it onto the album, but producer Ric Ocasek fought for its inclusion. Good producer.

From the masterful Nick Drake, ‘Saturday Sun’ is a song about the good and difficult times in one’s life, and how the fun times often go unrecognized and unnoticed – until the bad times come knocking on your door.

It’s a song about living in the moment and not letting life pass you by, much like ‘Moonshadow’ by Cat Stevens (that features on our songs about the moon playlist)

Nick Drake is now considered one of the best singer/songwriters to have ever lived, with an avid cult following that grows by the year.

‘Waiting For the Sun’ by The Doors

From The Doors’ fifth album, Morrison Hotel, ‘Waiting for the Sun’ is a song about waiting for something that never comes.

Some think it’s about waiting for ‘the American Dream’ that never materializes (we are left “to live in the scattered sun”), or are we waiting for knowledge, truth, or for this LSD trip to kick in (Morrison was notorious for that).

The song has the unforgettable line: “This is the strangest life I’ve ever known.”

‘You are the Sunshine of My Life’ by Stevie Wonder

Written for Syreeta Wright, who Wonder married in 1970, it’s a sweet song. But, sadly, it didn’t work out for them, and two years later, they were divorced. “I was always living in his shadow,” she said.

Despite this, ‘You are the Sunshine of My Life’ remains a heartfelt expression of everlasting love for someone.

‘You Are the Sunshine of My Life’ was one of two singles from his ‘Talking Book’ album. The first song, “Superstition,” also charted at number one in the United States.

‘Ain’t No Sunshine’ by Bill Withers

Inspired by the 1962 movie Days of Wine and Roses, ‘Ain’t No Sunshine’ was a breakthrough hit for ex-factory worker Withers.

In the third verse, Withers sings “I know” 26 times. He’d run out of lyrics and did it as a placeholder. The musicians in the studio loved it, though, so he left it in.

It would be the first of three gold records in the U.S. (including ‘Lean on Me,’ featured on our songs about friendship playlist).

At the time of wrting this, Withers was a factory worker making bathrooms for 747 airplanes. When the song went gold, his record company rather amusingly presented him with a golden toilet seat.

‘Good Day Sunshine’ by The Beatles

McCartney’s intention was to create something similar to Lovin’ Spoonful’s hit ‘Daydream.’ The Kinks’ ‘Sunny Afternoon’ was possibly another source of inspiration for McCartney.

The song contrasted with the more austere and experimental songs on the album Revolver (it’s also the only song on the album about love). Many think the song’s lightheartedness (a sign of things to come from McCartney) dilutes the album’s strengths.

Related: This one also appears on our playlist of sunrise songs.

‘You Are My Sunshine’ by Johnny Cash

The heartwarming children’s classic ‘You Are My Sunshine’ was popularized by Jimmie Davis and Charles Mitchell in 1939.

One of the most popular songs of all time, ‘You Are My Sunshine,’ has been recorded by everyone from Bing Crosby to Carly Simon.

It also cropped up in the Coen Brothers’ brilliant movie O Brother Where Art Thou?

‘You Are My Sunshine’ has been declared one of the state songs of Louisiana because of its association with Jimmie Davis who was a governor of the state.

‘Walking On Sunshine’ by Katrina and the Waves

A song about unbridled joy, the feelgood ‘Walking On Sunshine’ is one of the most positive songs out there.

Unfortunately for the band, when Hurricane Katrina devastated much of the U.S. Gulf Coast in 2005, ‘Katrina and the Waves’ appeared in numerous headlines.

Despite its success, Katrina & the Waves are considered a one-hit-wonder in the US, having never followed up on the success of this song. It’s not all doom and gloom though. Royalties from this song alone are thought to be in the region of $1 million per year. Reason to walk on sunshine, don’t you think?