15 Songs about the Universe that Are Out of This World 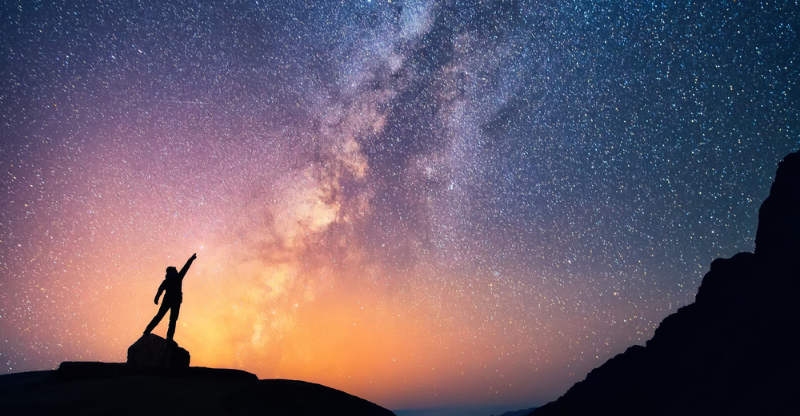 The universe is a vast, wild, magical place full of everything we could ever imagine and more.

One of the most profound creative ways we as humans have explored this vastness is through music. These songs about the universe help us dance to a higher plane in our minds, exploring this mystery known as The Universe.

Let this playlist take you on a trip through the cosmos!

Across the Universe – The Beatles

From the Let It Be album, the first song to come to mind for Beatles fans when the word “universe” is mentioned is ‘Across the Universe.’ John Lennon wrote the song after arguing with his wife, Cynthia. He started off irritated but wrote this cosmic song of ethereal beauty and unique style. “Words are flowing out like endless rain into a paper cup. They slither wildly as they slip away across the universe. Nothing’s going to change my world.” The hypnotic song takes listeners to a higher plane, as intended by the mantra “Jai guru deva, om” of the chorus.

Related: Enjoy the artistic imagery in these songs with figurative language.

The acoustic, rhythmic song by Wilco, ‘The Universe’ immediately leads listeners into a quiet, enthralling space—a pleading for the truth. “Spit it out, every doubt. The universe, for better or worse, it’s the only place to be.” Ride along the synth waves as they kick in the otherworldly hum that leads into “everything.” Listen, breathe, and rest in communication and truth.

My Universe – Coldplay and BTS

The first collaboration between Coldplay and South Korean boy band BTS is this stunning, uplifting song, ‘My Universe.’ The love song is all about loving someone so much that you want to put them first in your life. “Baby, you are my universe.” The song bounces back and forth between English and Korean lyrics as the two bands play into their strengths in this upbeat, light song.

T. Rex’s song ‘Universe’ isn’t a lyrically heavy song, with just three stanzas. Some could consider it a dance number in jazz-blues rock—it’s got a steady rock rhythm, for sure! It’s a love song written to an anonymous woman referred to only as “sister” in the song. The song invites dancing and love into existence as the singer and the woman would transverse the universe in dance.

Related: Dance the night away with this playlist of dance songs.

Princes of the Universe – Queen

One of the most well-known and well-beloved rock bands of all time, Queen, of course, had to get in on this theme of the universe! “We are the ‘Princes of the Universe'” just makes sense as a lyric for this awesome band. However, the song was actually written for the film Highlander and not a typical album by Queen. One of the music videos for this song features Freddie Mercury briefly re-enacting the film’s sword fighting scene, which helped bring the titular character his notoriety.

Master of the Universe – Hawkwind

This otherworldly song, ‘Master of the Universe,’ is an incredible rock song that pulls you in with the synth strings and keeps you grooving to the rhythm of the electric guitar and bass. The song first appeared on Hawkwind’s 1971 album In Search of Space. The song runs a bit longer than many standards, going 6 minutes and 17 seconds. The song has a transcendental, hypnotic vibe that uses unusual musical techniques and sounds. Sit back, listen, and let this nearly instrumental song take you away to another world!

Universe and U – KT Tunstall

‘Universe & U’ by KT Tunstall offers listeners a rhythmically, almost hypnotic, slow listen. The love song uses imagery from outer space like black holes and stars burning bright to evoke the “larger than you and me” feeling of the song’s overall vibes. “Hear everything you say, even when you’re miles away. ‘Cause I am me, the universe, and you, oh.” The evocative song is thought, by many fans, to be about ultimate love that knows the other person so well that no matter how far away you are, you know exactly where and how the other person is.

Related: Blast off with this space songs playlist.

The Universe is You – Sophie Ellis-Bextor

This funk-electronic, nu-disco, pop-rock song by Sophie Michelle Ellis-Bextor entitled, ‘The Universe is You’ perfectly blends the genres for a catchy, danceable song. The English singer/songwriter is known primarily as an indie-rock artist who went solo after a time with the band Theaudience. This breakup song has a real earworm in the repeated line ‘The Universe is You,’ giving you plenty to grab onto even if you can’t recall the rest of the lyrics. And the line does say it all!

A slow, erratic, yet lightly pulsing acoustic song, ‘Universe’ by Sébastien Tellier, is a perfect song for a calm listen as you lean back and contemplate the universe. The lyrics feel all over the place, appropriate for such a theme—and the vocals are highly processed for an otherworldly feel. The lyrics themselves imply loss and mourning for someone long gone, with the soft rhythms underneath supporting the mood. “Goodbye. I’ve wandered ’round isles, and all the universe cries for your memory.”

Related: Find comfort with the best songs about missing someone who died.

‘Parallel Universe’ by Red Hot Chili Peppers comes from their 1999 album, Californication. The song was released two years later as the final single from the album and managed to chart at 37 on the US Modern Rock Tracks. The song distinctly has no backing vocals when their typical songs have plenty. The song continues to be a big favorite for live shows when the band tours, and fans regularly request the tune on the radio.

You Are the Universe – The Brand New Heavies

The Brand New Heavies are an acid jazz funk band that formed in 1985 in London. The band released ‘You Are the Universe’ in 1997 as their third single from their album Shelter. The song itself isn’t perhaps as well-known as others on the album, but the upbeat, passionate song offers an encouraging message we can all embrace. “You are the Universe. And there ain’t nothin’ you can’t do. If you conceive it, you can achieve it. That’s why I believe in you. Yes I do.”

Related: Pump yourself up with this confidence songs playlist.

Master of the Universe – Pulp

‘Masters of the Universe’ by Pulp is an apropos title for this narrative song released in 1994. Jarvis Cocker wrote the almost hypnotic driving song after he fell from a window trying to impress a girl with his Spiderman impression. The album the song comes from, Freaks, didn’t sell as well as they had hoped, mainly due to studio interference, according to Cocker’s interview with Record Collector.

Planets of the Universe – Stevie Nicks

From Stevie Nicks, famed singer from Fleetwood Mac, ‘Planets of the Universe’ was originally recorded as a demo for her 1977 inclusion in the band’s famous Rumours album. The song itself earned Nicks a Grammy nomination. In 2001, she rerecorded the intoxicating song for her solo album Trouble in Shangri-La. The song was written about her relationship with Fleetwood Mac’s Lindsey Buckingham. In the later recording, she cut some harsher lyrics for a more positive take on the past relationship.

Lord of the Universe – Donovan

A bluesy jazz song with hints of funk, ‘Lord of the Universe’ comes from Scottish singer-songwriter Donavan. The song finds its place originally on Beat Café, the artist’s 23rd studio album. The song takes a unique persona for the concept of “lord of the universe” with the repeating lyrics, “I’m the lord of the universe, it’s best you don’t mess with me.” You can interpret the song in many ways, with some fans leaning into an almost religious piece, with others feeling it could be some view of a self-aware narcissist who knows he’ll hurt his love if she crosses him.

Related: Here are some more songs about self-centered people.

Released in 2000 on the album The Moon and Antarctica by Modest Mouse, ‘Dark Center of the Universe’ has a vibe that feels a bit like a modernized Pink Floyd crossed with later Beatles music. The unique sound effects and use of sitar-like instrument sounds, switching into muted bending guitar and dark electric guitar, accompanies the lyrics perfectly for an otherworldly feel while keeping it grounded somehow. Some of the background effects almost feel like a whale song – which could be the tie-in for the Antarctica piece of the album.

More songs about the universe: