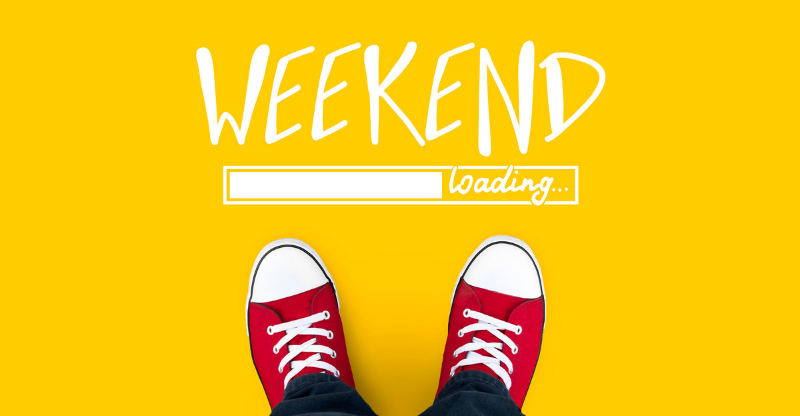 These feel good songs are the perfect soundtrack to your weekend and will help you enjoy it to the max!

Get pumped for Friday with dance hit, ‘Ready for the Weekend.’ Roll into Saturday jamming out to carefree tunes by John Mayer and Jordan Davis. Slow down your Sunday with island vibes provided by Ziggy Marley.

Enjoy your break from the grind to the fullest with these songs about the weekend :-).

Though the song opens up with isolated swampy slide guitar, ‘Weekend’ soon transitions to a groovy beat. Kane Brown sings about hanging with his girlfriend as soon as he can after working hard all week. It’s a great road trip tune that’s easy on the ear. Perfect for driving down the highway to your vacation destination.

With heavy compression and full pop production, ‘Here Comes The Weekend’ is sure to get you hyped for your time off. Pink tests her vocal limits with this one, pushing just past her range for an edgy effect, adding intensity to the song. Lyrically, she takes a ‘Girl Power’ approach detailing what she’ll be wearing out and what kind of fun she’ll be having (Here’s a hint: She’s not looking for a fight).

Related: see our pick of the best P!nk songs.

Love on the Weekend – John Mayer

John Mayer’s soft vocals, dreamy guitar harmonies, and software-created drum beat will put you in an immediate trance. He serenades his special someone in this track, promising to steal her away and give her all his love while the weekend is theirs. It serves as a romantic reminder to take time off and rekindle sparks often lost when the stress of work gets in the way.

Jordan Davis exemplifies pop-country in this sugary tune about the girl he loves. Throughout the lyrics, he tells her no matter what he’s doing over the weekend, if she just says the word, he’ll drop his plans to be with her. The song’s message is a cheery declaration of his devotion to his relationship.

Out on the Weekend – Neil Young

Neil Young accomplished his unique sound in part by combining alternate guitar tunings with unique chord voicings. In ‘Out on the Weekend’ he boasts sorrowful sounding harmonica as he sings about longing to fall in love in this somber, pensive ballad originally recorded in 1971 for his internationally-acclaimed album, Harvest.

Related: see songs about moving on with your life.

Something for the Weekend – The Divine Comedy

This playful pop tune by Northern Irish band The Divine Comedy is a story-driven song about a promiscuous man who finally meets his match. As the two characters engage in a cheeky tit-for-tat game, they try and one up each other to see who can come out on top. Take a listen to see who ultimately wins in this fun 90s recording.

Kacey Musgraves’ Americana stylings and honest, raw songwriting has always thrown the commercial country music industry for a loop. Though she’s somewhat of a curveball for traditional record labels, she’s embraced by the who’s who of country music as she is often seen hanging out with legends such as Willie Nelson. ‘Lonely Weekend’ is about still being alone even if you are in a relationship.

Weezer frontman Rivers Cuomo penned this tune about a hypothetical tortured relationship. With a melodic sample from a song off an earlier album of theirs, ‘Weekend Woman’ details the story of a man who is constantly trying to get back to his love interest (possibly from his distant-past) despite life getting in the way. Lyrics from the song suggest the relationship is a rocky one due to his inability to be able to fully trust her.

Brantley Gilbert brings his high-powered, rock-induced sound to the country track, ‘The Weekend.’ With his whiskey-coated voice, he sings about dreaming of having fun on the weekend while he’s stuck at his job. Once Friday hits and his paycheck lands in his bank account, he’s ready to party. The song’s overall message focuses on the importance of making time to have fun despite life’s obstacles and humdrum responsibilities.

Ready for the Weekend – Calvin Harris

Scottish artist Calvin Harris went full-on pop for his second studio album Ready for the Weekend, featuring a title track by the same name. Nerves got to him a bit once he started performing songs from the album because he had strayed from his electronic-dance roots. The title track is a quirky, upbeat tune about a diva partying it up on the weekend. Acclaimed British vocalist Mary Pearce lends guest vocals for the track.

Related: go to our playlist of Friday songs.

Livin’ for the Weekend – The O’Jays

This R&B classic was a chart-topper in the 70s and features plenty of clean, crisp Motown vibes for the listener. A track about many people’s favorite day of the week, Friday, the singer goes over his plans for the weekend. As the song weaves through strong backing vocals and saucy piano, the listener feels freer and freer as he connects with the singer who can be found all around town throughout the weekend.

Every Other Weekend – Reba McEntire

Sometimes referred to as The Queen of Country, Reba tackles a tough subject in this early 2000s country track about divorce. The song’s story features a couple who has split but has children. When they come together every other weekend to drop the kids off to one another, for a short time they feel like a family again. Joanna Garcia and Steve Howey, who co-starred alongside Reba on her hit TV show, portray the couple in the music video for the song.

Related: see our list of best songs about divorce.

Hymn for the Weekend – Coldplay

Featuring a dreamy opening with New Age sounds from nature and eastern-inspired mystic philosophy, ‘Hymn for the Weekend,’ opens up after a few measures and the listener instantly recognizes Beyoncé’s voice. She guest appeared on this track, and her vocal parts were so powerful Chris Martin of Coldplay featured them much more prominently than originally intended. This dancy track appears on Coldplay’s 2015 album, A Head Full of Dreams.

Ziggy Marley sings about embodying the celebration of life in this traditional reggae toe-tapper. He reminds the listener to let go of longheld sorrows and find happiness in freedom – it’s a great Sunday morning song! It’s also a great soundtrack for your next tropical vacay, and leaves you feeling all the good vibes with his uplifting lyrics. Ziggy grew up with music in his blood. He is the oldest son of reggae icon, Bob Marley.

This house dance track gained organic traction after it was played at a house party and everyone asked for it to be put on repeat. David Zowie is an English DJ who placed #1 on the UK charts with this tune, a techno-fueled anthem for getting pumped and partying it up on the weekends.

Related: add this to your Saturday songs playlist.

Workin’ For The Weekend – Loverboy

Loverboy’s big 80s hit is still used in TV and film to this day due to its commercial appeal. The trio wrote the song when they were out on a Wednesday afternoon looking for inspiration for a new song and they realized the streets were deserted because everyone was working. Because of this experience, they originally titled the song, ‘Everybody’s Waiting For The Weekend.’

Swedish duo Roxette might have been big in the 80s, but one listen to their song ‘Here Comes The Weekend’ transports you back in time to the 60s, when feel-good light rock reigned supreme. They have always found a ton of songwriting inspiration from 60s music, and reached international fame when their song ‘The Look’ reached #1 on the charts in the US.

Blink 182’s signature rock sound is full force in their song, ‘Kings of The Weekend.’ Drawing on memories and nostalgia, they honor punk rock bands in this tune, telling the listener that no matter how bad their week was or what they were going through, they could find solace at a weekend live music show.

Though not necessarily a household name these days, Charlie Rich reached quite a wide audience in the 50s and 60s with his sultry vocals, rockin’ hits, and polished songwriting skills. One can’t help but hear similarities between Rich and Elvis Presley while listening to ‘Lonely Weekends.’ This connection has weight to it though. One of the artists Rich wrote for was Elvis. His countrypolitan style went over well with the clean sounds of the post-World War II musical era.

Every Day’s The Weekend – Alex Lahey

Australian singer-songwriter Alex Lahey’s indie-rock track ‘Every Day’s The Weekend’ can be taken a few different ways. Though some critics have described it as being about anti-work culture, Lahey has stated before it is about being in a new relationship when everything is fresh and exciting. Take a listen to the raucous chorus and bop along with the tune’s infectious beat. What do you think it’s about?

This clubby track from 2014 is an uplifting anthem to living it up on the weekend. Featuring two different unique stylings from DJ R3HAB and Australian DJ sister-duo NERVO, these artists use techno beats, synthesizers, and fierce vocals via Ayah Marar to usher in the carefree vibes of the weekend the right way. This dance track will have you feeling good in no time.