16 Best Songs about Thinking and Overthinking 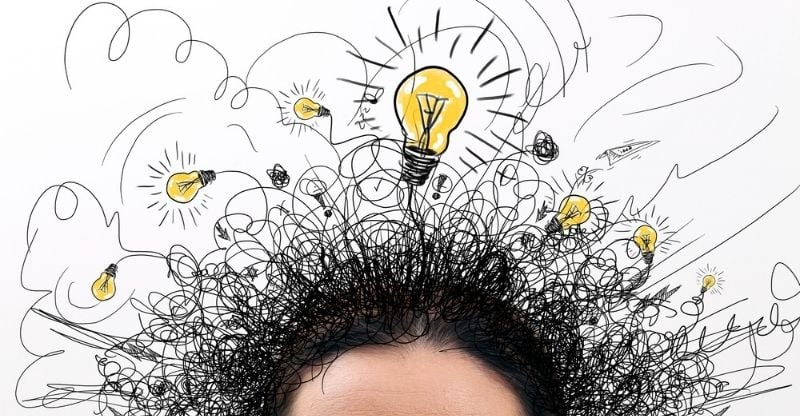 Have you ever gotten lost in your thoughts? Are you prone to overthinking?

Thinking is often one of the things humans spend too much time doing, and there are plenty of songs that prove this theory. Love, loss, and insecurities are all reasons we humans stare at the ceiling and think.

Stop thinking for a minute and take a look at this list of songs about thinking. Maybe it’ll give you some new topics to ponder!

“Don’t you dare disrespect me” is essentially what Aretha Franklin is singing in this classic. She recalls how she’s known the man she’s singing to since she was a child and can’t deny that there’s something special between the two. As they try to pursue a relationship, she warns him to think about his actions. It appears that pretty ladies are tempting him to be unfaithful (people “trying to make other people lose their minds”), and she tells him not to be one of them. This song demands respect and loyalty from a lover.

Think for Yourself – The Beatles

This song can be interpreted in many different ways. George Harrison wrote the song but said in his autobiography that he couldn’t remember what inspired the lyrics. He suspected it was probably about the government. Many people do see it about the government, especially since the song sings of a hopeful future and correcting mistakes. Some people see it as a breakup song because of the harsh guitar and words (misery, ruins), and since the lyrics say, “I won’t be there with you.”

NF takes you through his deep, confusing thoughts in this song. In the first verse, he reflects on the type of people he likes to be with and appears to be talking to his partner, saying he doesn’t deserve her, and confesses that he doesn’t always act right. In the second verse, he questions his own thoughts, from how he views the world to how he feels about others. This song will hit close to home for all the overthinkers out there since it sounds like common 2 AM thoughts on a sleepless night.

Think Too Much – Paul Simon

If you really think about it, this song is about overthinking. But don’t overthink the lyrics because the meaning is right on the surface. (Okay, enough mind games.) Paul Simon thinks about how the brain works and wonders if maybe he’s thinking about that too much. His thoughts shift to his childhood and how he spent too much time thinking about girls. Then, he thinks about one girl specifically. He obviously thinks about her enough to prevent him from talking to her, and he tries to find the courage to go for it, but not without thinking about it first.

This sad song is about a brokenhearted man leaving a relationship that wasn’t going anywhere. He loved the woman, but she wasted his time and let the relationship last too long when she knew it wasn’t going to be forever. “But don’t think twice, it’s all right” can be interpreted as Bob Dylan telling that to the woman or himself. Perhaps he’s reminding himself that life will go on, and there’s no need to worry about changing his direction. If he said it to her, it was a kind thing to do since he did say she wasted his time.

Thinking About You – Norah Jones

Sometimes it’s hard to mentally let go of someone after you’ve told them goodbye. The singer thinks of the love interest when she needs someone warm, but the second verse reveals that the relationship isn’t working and has to end. She feels as though she’s not needed in the relationship. Even though it’s over, she can’t actually let them go, and she tells them to think of her because she’ll still be thinking about them even when they’re across an ocean.

Think for a Minute – The Housemartins

This song is a social commentary about society, but the subject can vary based on the time and place you hear it. If you listened to it in the 1980s when it was released, it may have made you think about the threat of nuclear war and how an apathetic population would allow such a horrid thing to happen. But if you listen to it in the age of smartphones, it may sound a lot like technology making everyone numb to what’s going on around them because they’re always looking at their phones.

‘Wishful Thinkin’ is a warning not to get caught up in the thoughts of what your life could’ve or should’ve been. “You can’t outsmart the boss” could be referring to God, fate, or time. It’s saying that you can’t change the outcome of your past decisions, so you shouldn’t waste your time or break your heart by thinking of all the things you could’ve done differently. “Playin’ with the moon” might be referring to dreaming big since this lyric is followed by a more positive sentiment that suggests you can change the future, but not the past.

This is a love song where the singer promises to be with their loved one forever and always. The chorus says, “I’m thinking out loud,” which alludes to the idea that the singer is singing the words as he goes, and perhaps he even feels shy about what he’s saying. You know those rambly conversations where you’re not quite sure what you’re saying, but you’re saying it with passion anyway? Perhaps he got swept up in his feelings and is trying his best to string them together.

The singer in this song is dedicated to their lover and will do anything for them. She’ll constantly be thinking of her lover when she can’t be around them. The singer is aware that she has it good with their partner, and she doesn’t take the relationship for granted for a single second. Her feelings appear to be reciprocated since the person saying “I’ll be thinking about you” is the lover when the two have to be apart.

OMI thinks he found The One in this song. He sings of a beautiful woman who is supportive and is always there for him. Even his mother likes her, and when your mother likes your love interest, you know you picked the right one! He says that other girls ask him if he wants to cheat on his partner, to which he firmly denies the offer and even thinks he’s ready to propose to her.

Imagine being young and in love and wishing you could be left alone with your lover. Tiffany sings about the thrills of sneaking out for some alone time. The chorus paints a picture of two people running off into the dark, tripping, and rolling down a hill, only to land in each other’s arms at the bottom of the hill. It’s the kind of scene you’d only find in movies. Many people think Tiffany was the first to sing the song, but it’s actually a cover. The original was recorded in 1967 by Tommy James & The Shondells.

Another Day in Paradise – Phil Collins

Phil Collins urges you to “think twice” about ignoring those who ask for help. He sings of a woman who is homeless and has nowhere to go, but nobody will help her out despite her being cold and blistered. The song’s goal is to make people think about their situations and how bad other people have it. Most people’s lives may seem far from paradise, but many people have it good compared to people asking for help on the streets.

Enjoy Yourself (It’s Later Than You Think) – Prince Buster

This song was first recorded way back in 1949, but Prince Buster’s version was recorded in 1963 and is one of many covers of this song. The song warns that life is short and “it’s later than you think,” meaning you don’t have as much time as you think you do to go out and have fun. But, it also tells you to do well in school so you can “get wisdom, get knowledge, and understanding.” It’s a great song for young people to hear since it encourages wisdom and fun at the same time.

Ariana Grande sings of missing a lover while she’s alone at home. The song may make you think it’s about a former lover until she says, “I can’t wait ’til you get home,” so it’s a little unclear who this one is about. Regardless, she’s thinking about her lover while they’re gone because the thoughts keep her company, yet they make her miss them even more. “But at least I have the memory” shows how desperately she misses them and that the thoughts are certainly better than nothing.

Thinking of You – Lenny Kravitz

Lenny Kravitz wrote this song for his mother, who passed away three years before the song’s release. He asks his mother what her life is like now—are the colors different? Is it always sunny? He tells her he’s thinking of her and is trying his best to be everything she wanted him to be so he doesn’t disappoint her. The lyrics are sweet and sad, but the upbeat tune will have you recalling happy memories of your loved ones.