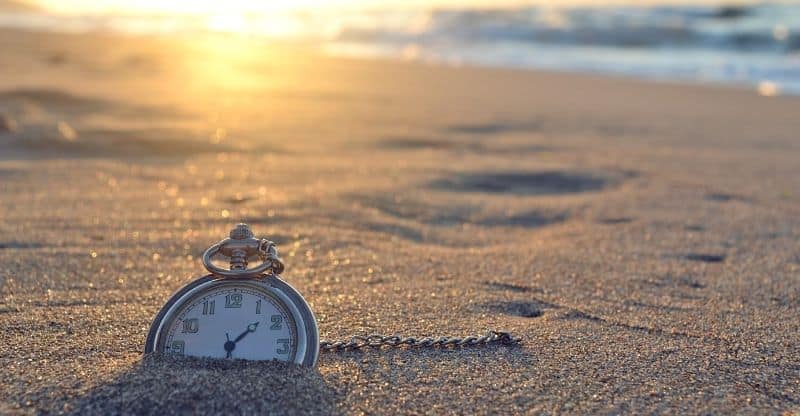 Time is a fantastic topic for songwriters because let’s face it… we’re all sort of bound by it.

Einstein and theory of relativity nerds aside, nobody really has a clue how it all works. Is time infinite? Are there infinite universes? Who knows.

But we know one thing for sure. Time is running out for each and every one of us. As far as we know, there’ll never be another ‘me’.

In this article, we share some of the best songs about time ever written. There are songs about the passing of time, wasting time, wanting more time, regretting the time you’ve had, having too much time, even time travel!

Pink Floyd’s masterpiece Time is a clever representation of an unfulfilled life.

When you’re young you think you have unlimited time and “fritter and waste the hours in an offhand way”. You think time is infinite.

Before you know it, you’re old and you can’t do those things anymore. Half of your life is over and you don’t have a thing to show for it “and then one day you find ten years have got behind you, no one told you when to run, you missed the starting gun”

But you “run and you run to catch up with the sun…”, “shorter of breath and one day closer to death”. It’s the classic midlife crisis.

In the final bit, the song talks about someone in old age doing nothing but sitting home and remembering their life “it’s good to warm my bones beside the fire”.

The famous quote by Thoreau in the book Walden “the mass of men lead lives of quiet desperation, and go to the grave with the song still in them.” is very relevant here, and perhaps writer Waters was aware of it.

Easily one of the best songs about time ever written, if not the best.

The track Time from Bowie’s Diamond Dog’s album is another fabulous song about the passing of time.

In particular, the time waiting to go on stage (Bowie was known to get terrible stage fright and apparently used his personas to combat the fear). The song captures the emotions he’s feeling as ‘showtime’ gets nearer (Janis Joplin was another who hated the waiting around before the show).

There is also a reference to the impending split-up of the band the Spiders from Mars, and indeed the demise of the Ziggy character.

Bowie famously announced the end of the band live on stage at Hammersmith Odeon, London, much to the shock of his fans and the band. But it explains the line: “breaking up is hard, but keeping dark is hateful.”

“Time Is On My Side” by The Rolling Stones

A classic song from the bad boys of the ’60s, The Rolling Stones.

On the face of it, it’s lyrically a pretty straightforward song. It tells the story of a guy whose girl wants to party like crazy.

She is encouraged to “go ahead, go ahead and light up the town, and baby, do everything your heart desires”

In the knowledge that “you’ll come running back” because time is on my side.

An alternative interpretation (and arguably a more interesting one) is that the words are from the perspective of a drug, specifically heroin, talking to a junkie.

When you look at it that way, the song takes on a whole new meaning: “cause I got the real love, the kind that you need, you’ll come running back”

“The Times They Are-A Changin'” by Bob Dylan

Dylan’s classic The Times They Are-A Changin’ is a song about change, but as it mentions ‘The Times’ it’s a good excuse to include it, as it’s such a great song 😉

Written in the ’60s, when many of the wrongs of society (such as racism) were being challenged via the civil rights moment, as well as the rise of ’60s counterculture in general.

Kids were starting to grow up with different ideals than their parents, striving for their own freedom. The lyrics here were right on the money: “your sons and your daughters, are beyond your command, your old road is rapidly agin'”

In the last verse there is a line about the order unraveling “as the present now, will later be past, the order is rapidly fadin’.”

This is reminiscent of W. B. Yeats’ apocalyptic poem The Second Coming where he writes “things fall apart; the center cannot hold”.

“Time Has Come Today” by the Chambers Brothers

This psychedelic soul classic was written after sitting in on a class at UCLA with Timothy Leary, and has been covered by Steve Earle and The Ramones. among others.

It’s a classic ’60s track about fighting for social justice and an end to the Vietnam War.

“Time Of The Season” by The Zombies

Another ’60’s hit, this time celebrating free love of the ’60s and the sixties sexual revolution.

“It’s the time of the season for loving…”

The song is characterized by the singers haunting voice, the “ahhh” throughout much of the song, and some very funky organ.

The words “what’s your name, who’s your daddy, is he rich like me?” are a nod to the standard “Summertime”.

In the cult classic movie The Rocky Horror Picture Show, mad scientist Frank-N-Furter (played by the brilliant Tim Curry) hosts a party at his castle, where the guest do the “Time Warp”.

It’s a parody of novelty dances such as “The Loco-Motion” or “The Twist”, and has become a classic dance routine at weddings and anywhere else alcohol and good cheer reside.

Richard O’Brien, the writer of the song, is the humpbacked servant.

“Back In Time” by Huey Lewis And The News

This song appears twice in the hit movie Back to the Future.

First, as Marty McFly (played by Michael J. Fox) wakes up to it on his alarm clock after returning from the past. Second, it plays over the end credits.

“Time After Time” by Cyndi Lauper

Time After Time was Cyndi Lauper’s first #1 hit in the US.

It’s a gorgeous song, both lyrically and musically, and reminiscent of Kate Bush.

While on the surface its quite a sad song, its central message is powerful and uplifting:

In many ways, it’s a song about friendship or love.

Did you know? Jazz legend Miles Davis recorded his own instrumental cover of this song in the ’80s and played it in most of his concerts from 1984 until his death in 1991.

“Remember The Time” by Michael Jackson

In Jermaine Jackson’s book ‘You Are Not Alone: Michael, Through A Brother’s Eyes’, Ross was “the one great love that, as far he was concerned, escaped him”.

He also wrote ‘dedicated with love to Diana Ross’ on the single sleeve.

Jackson’s music videos were always a cut above, and this one (with a cameo from Eddie Murphy as a Pharoah in ancient Egypt) has some amazing dancing sequences.

“Does Anybody Really Know What Time It is?” by Chicago

From Chicago’s first album, “Does Anybody Really Know What Time It is?” has an underlying message about the frailty of time. Nothing is certain.

The song criticizes people “trying to beat the clock” and stresses the importance of taking time to appreciate the small pleasures in life.

The lines “we’ve all got time enough to cry/die” were thought to be written in protest of the Vietnam War.

Inspired by the 1979 movie Time After Time, the song is about traveling into the past and trying to change something you did.

The song’s lyrics are open to interpretation, but the opening verse “If you had the time to lose, an open mind and time to choose, would you care to take a look, or can you read me like a book?”

It sounds like a classic “deal with the Devil” song.

Especially the verse “make you an offer you can’t refuse, you’ve only got your soul to lose, eternally…Just let yourself go!”

There’s a nod to Doctor Who too, as the Doctor’s time machine (the TARDIS) is on the back of the sleeve (Iron Maiden were fans of the British TV show, Dickinson even bought a Dalek when the band made it big.

“Good Times Roll” by The Cars

It’s a very repetitive song that will irritate some people (almost every line starts with “Let the good times roll”) but it’s a great song about ignoring what others say and focusing on the good times.

Coldplay’s Clocks is a classic love song about regret and “cursed missed opportunities”. It could even belong on our list of unrequited love songs.

The protagonist (Chris Martin himself?) has tried and failed many times “tides that I tried to swim against”.

But the clock is ticking, and he feels time is running out to take action.

“home, home, where I wanted to be” could literally be a longing for home, or he views this other person as “home”.

“Good Riddance (Time Of Your Life)” by Green Day

As the name suggests, this classic Green Day tune is about a break-up. It was actually written by singer Billie Joe Armstrong when his girlfriend moved to Ecuador.

It’s about letting go and moving on “so take the photographs and still frames in your mind, hang it on a shelf in good health and good time”

There’s a realization that things are over “in the end it’s right”, and a rather snide ‘”I hope you had the time of your life”

Fans of the TV show Seinfeld will know the song as it appeared in the penultimate episode when the cast takes a nostalgic look back at the past.

“Too Much Time In My Hands” by Styx

A classic rock track here, its a tale of a guy who’s down on his luck.

It has a memorable ending, with a clock ticking and an alarm sounding at the end.

So there you have it, our pick of the best songs about the great leveler, time.

There’s a common theme to many of these songs, and that is about time fading away like sand through your fingers. Fear of wasting time and never achieving your potential.

I’m sorry to be the bearer of bad news, but it’s true! Ask a guy in his 80s who has plenty of money which he’d prefer, to keep his money or be young again. He’d bite your hand off to be young again.

These songs serve to remind you that life is short. You have one life, live it!