12 Best Songs about Tractors to Help You Plow the Field 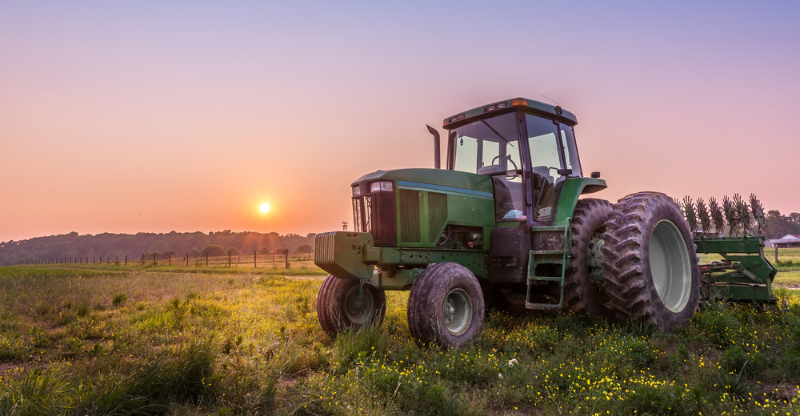 Country music has long honored the important legacy of farmers in the US. Many country tunes have been penned by Nashville songwriters who grew up on farms and understand that a tractor – preferably a John Deere tractor – can be a more sought-after necessity than a car in the south!

Honoring the tradition of farmers and the tractors they ride on (sometimes even on a romantic date night!), here is a list of songs about tractors.

Country singer Granger Smith’s song ‘Tractor’ is a rare modern country song with only one writer. The tune is deeply personal to Granger. He wrote it after his father passed away in 2014. It took his family two years to convince him to put it on his 2016 album, Remington. The song captures the essence of his father, a Texas farmer, through and through.

Related: Here are the best songs about loss.

Nashville songwriter Jim Collins loves penning tunes about tractors. Before he co-wrote Jason Aldean’s ‘Big Green Tractor,’ he wrote ‘She Thinks My Tractor’s Sexy’ with fellow songwriter Paul Overstreet. They both drew inspiration for the tune from their busy lives at home with kids running around. If you live in the south, instead of money or status, chances are a girl might fall for a country boy with a really nice, hard-workin’ tractor! 😉

I Want My Tractor Back – Lianna Rose

“His heaven now had turned to hell cause Mary and his tractor were gone.” Leave it to country artists to put a comedic spin on painful moments. That’s all part of the southern culture built on a history of overcoming insurmountable odds to keep living. In Lianna Rose’s ‘I Want My Tractor Back,’ she tells the story of Bill, who shacked up with Mary only to come home one day to find she took off with his prized possession, his tractor.

Related: Listen to the best songs about affairs.

“Son, you ain’t got a thing on me. See, I got friends with tractors.” Country songwriter and singer Rodney Atkins pens an ode to farmers everywhere with his song ‘Friends With Tractors.’ He tells the story of meeting a hotshot California businessman on a plane who loves to “drop names.” Atkins takes a minute to school him on the real people who matter. The ones in charge of growing your food.

Related: Hear songs about farmers and other jobs on our list of the best songs about occupations.

One of the classic songs from country music’s golden era in the 1990s, Joe Diffie’s romance tale ‘John Deer Green’ tells the story of Billy Bob and his girlfriend, Charlene. He loves her so much he paints it in “John Deer green” on the town’s water tower. Songwriter Dennis Linde originally wrote the tune before giving it to Joe Diffie.

Related: If you liked this song, you’ll love the best karaoke country songs.

Here’s to the Farmer – Luke Bryan

When he’s not singing tributes to country girls, Luke Bryan is singing about the importance of farmers everywhere. This easygoing tune cuts to the heart of farm life, which involves backbreaking work and a love of the land. Bryan’s father was a farmer, and he drew inspiration from his childhood for the song’s production.

Lonestar’s song ‘John Doe on a John Deere’ tells a love story from a farmer’s perspective. He fell in love with a girl in their small town, but she wanted to leave to see the rest of the world. He stayed behind. Years later, he gets a call from her after she realizes what she really needed all along is back on his farm in the town they grew up in. The story ends on a happy note, she returns, and they fall back in love.

Featured on his debut 2018 album, Mercury Lane, Jimmie Allen’s ‘All Tractors Ain’t Green’ is a metaphor for his challenging the traditional country music persona. As a black artist, though he didn’t fit the Nashville mold, he always pursued country music because that is the genre he loves. The song is also featured in the documentary For Love and Country, which focuses on black artists in country music.

Related: Feel empowered with this list of the best never give up songs.

A play on words involving the adult entertainment industry, ‘Corn Star’ was originally written by Jeffrey Steele and Shane Minor. When Craig Morgan got a hold of it, he changed a few things and made the tune all his own. The song inspired the design for one of his most popular T-shirts worn at his concerts.

“Raise a crop corn and raise a little hell.” Country music isn’t just full of tributes to the men out there working the land. The genre has plenty of tunes dedicated to the rough-and-tumble farm girls out there as well. Jason Meadows’ track ‘Farm Girl’ from his album 100% Cowboy is a tribute to his lady who “likes hanging with the boys doing 12-ounce curls.”

Things I Miss the Most – Van Zant

“Of all the places that you’ve ever been, what’s your favorite place to go?” The Van Zant brothers reflect on their childhood home on a small town farm in ‘Things I Miss the Most.’ The tough life of a touring artist is explored as they dwell on the place they miss the most despite all of the cities they’ve been to around the world. The song is featured on their critically acclaimed 2005 album Get Right With The Man.

Related: If you’re dreaming of somewhere else, listen to this city songs playlist.