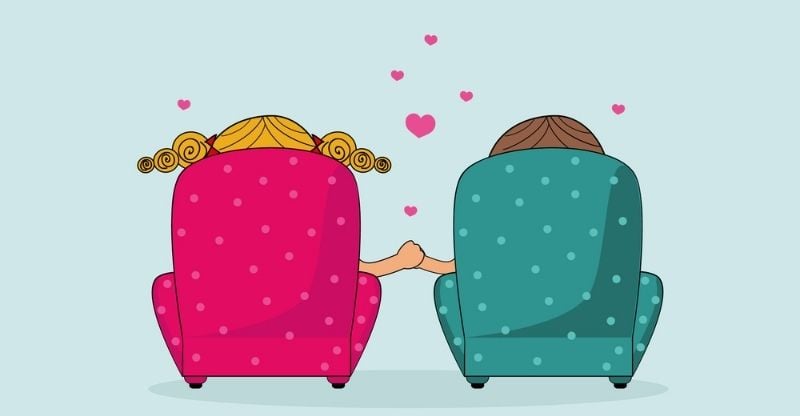 Is it really a thing? Or is it just something that Hollywood has made up to sell movies? Or something in fairy tales?

Well, whether you believe true love exists – or you think it’s a load of old baloney -here are some of the best songs about true love ever written. I’ll let you decide.

‘True Love’ is about Pink’s relationship with her husband. She admits she has frustrations with him and points out his flaws, like not knowing how to be romantic, yet she loves him anyway. Loving someone despite their flaws is what true love is all about, right? We feature this song on our playlist of best Pink songs (definitely worth checking out if you like her stuff).

Ed Sheeran is known for his love songs, and Thinking Out Loud is one of his most popular. He sings to his sweetheart about how he’ll always be in love with her – and when he’s old, he’ll still love her like he did when they were in their twenties.

Ex-Eagle Glenn Frey sings of a woman who changed his life for the better. From the moment he saw her, he knew it was true love. He’s confident that there isn’t a single trouble in the world that would be too much for them to handle together.

The love described sounds a lot like what you’d see in the movies, but most people know that this kind of love never lasts (eventually ‘the honeymoon period’ will pass). But hey, if Glenn is loved up 24/7, well done him!

Karen O sang this song for the boyfriend she had at the time. In the song, she almost begs him to stay because her love for him is strong, she wants him to stay with her. No one can love him like she can, she reminds him.

If I Ain’t Got You – Alicia Keys

In this song, the singer talks about how people are superficial and are only after what will bring them temporary joy. But, she doesn’t care about any of that as long as she has her true love.

Alicia Keys wrote this song shortly after hearing that the R&B singer Aaliyah passed away because of a plane crash. Alicia was on a plane thinking about what mattered the most to her and wrote this song on her flight. She realized that the things of the world didn’t matter to her; she only wanted the one she loved.

Related: see our list of songs about falling in love.

This song is about a man who wants to be with a woman, but the feeling isn’t mutual. He’s in love with her and dreams of the life they could have together, but it’s all a bit one sided.

All of Me – John Legend

‘All of Me’ shows the whirlwind of emotions that a devoted love can give you. At their wedding, John Legend sang this song for his wife, Chrissy Teigen. He mentions how not every moment is happy, but every moment with her is.

An interesting stylistic choice John made with the lyrics is mentioning opposites. “My downfall, my muse,” “underwater, breathing fire,” and “all of me loves all of you” show that there are ups and downs in the relationship, but the love between them balances it out.

This song is about Coldplay’s lead singer Chris Martin and his divorce with Gwyneth Paltrow. The whole album (Ghost Stories) is about the divorce, and this song shows Chris wishing the relationship could’ve stayed the same throughout the entire marriage.

The passion was gone from the relationship, but Chris was still in love and just wanted to hear lies so it wouldn’t have to be over. It’s a sad song that shows that mutual love can eventually become one-sided.

This is a love song sung by someone who has waited their whole life to be with someone and will continue waiting for the rest of their life if they have to.

The metaphor of “a thousand years” is actually meant to be taken literally since this song was written specifically for the Twilight Breaking Dawn film. Christina Perri was a Twilight superfan and was asked to write a song for the movie.

Just the Way You Are – Bruno Mars

Couples have danced and sang this song to each other ever since it came out in 2010. It was pretty much an instant classic, and rightly so. It’s catchy, the lyrics are straightforward and sweet, and it’s the song you use when you want to make your girl feel special.

In the song, a man is gushing over his sweetheart and how perfect her supposed “imperfections” are in his eyes. He doesn’t want to change anything about her even though she has her insecurities.

Related: see our list of songs about that special someone.

I’ll Stand By You – The Pretenders

The message in this song is beautiful and is what everyone hopes to hear from a partner. The singer promises to stand by her lover no matter what.

The most telling lyric is “nothing you confess could make me love you less.” Whatever their lover may have done wrong doesn’t matter because she’ll still be there for them, and any problems they have can be talked out rather than ignored.

God Only Knows – The Beach Boys

“I may not always love you” is a strange way to open up a love song. But how many times have you been angry with your lover?

The lyrics stay dramatic throughout the whole song by essentially saying life would be pointless without the lover, so why bother living if they can’t be with their love? It’s a sweet sentiment and shows just how strongly the singer feels about his love.

Related: we feature this on our list of old love songs (oldies but goodies.)

This is a slow song about waiting to receive someone else’s love. The drawn-out syllables match the idea that they’ve waited a long time to be with their lover. They desperately need to be with them, and they seem to be insecure about whether or not their lover is actually still their lover.

This song was written for the 1955 film Unchained, and the song was meant to show how the prisoners felt inside prison. It also reappeared in the 80s movie Ghost (starring the late, great, Patrick Swayze).

That’s How Strong My Love Is – Otis Redding

The verses in this song are full of hypothetical situations and metaphors that explain just how much the singer loves his partner. Imagine loving someone so much that you could be a rainbow and wrap them up and keep them warm, or being the moon that lets them know you’re still with them.

It’s a simple song that dreams big. Add this one to the list of songs you should be singing to your lover!

You Got Me – Erykah Badu and The Roots

This song is about a man and woman who met each other in France, but both happened to be from Philadelphia, so they were able to pursue a relationship back home.

They each have lines in the song and are assuring each other that they’re loyal and would never cheat because their love is the real thing, and nobody’s going to take that away from them. They acknowledge that relationships can get bumpy every now and then, but it’s no reason to start worrying about the trust they have between them.

You might not expect to find this classic Stones song on a list of true love songs, but love that’s so strong that “wild horses wouldn’t drag me away” sounds pretty ‘true’ to me. Of course, with the Stones – especially around the time of writing (early ’70s) – the song is likely about substance dependency than it is about women.

‘True Love Waits’ is about a relationship that doesn’t seem to have true love, but the singer seems to want to try his hardest to make it happen. He offers to change everything about himself, like his beliefs and clothing, and offers to have his lover’s children and wash her feet. “True love lives on lollipops and crisps” suggests that true love is only a fairy tale we hear about when we’re younger.

True Love is Hard to Find – Toots & The Maytals

Toots (Frederick Hibbert) sings of the true love he found with his partner who promises she’ll never leave him. The love they share is caring and compassionate and appears to be selfless. A necessary ingredient.