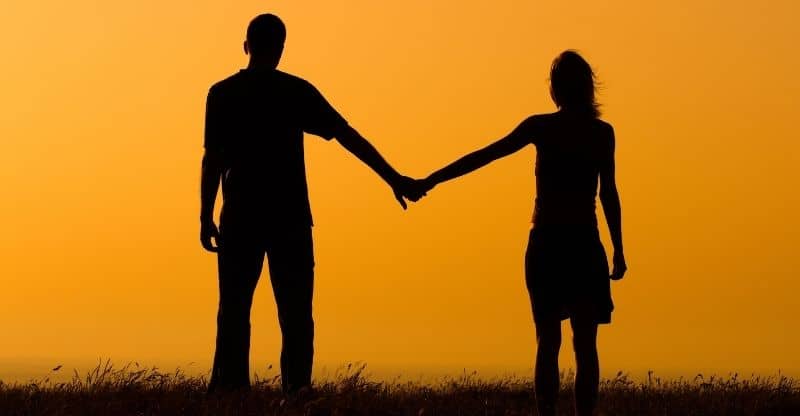 What’s the most important ingredient in a relationship?

I’ll save you the guesswork: it’s trust.

Trust is the glue that keeps relationships stuck together. Keep it, and the world is your oyster. Lose it, and the relationship will dwindle faster than you can say ‘jack robinson’!

In this playlist of songs about trust, we list some of the best songs on the subject ever written. Songs about the role of trust and honesty in relationships.

If you want to maintain long, healthy acquaintances with people….pay attention!

“A Matter of Trust” by Billy Joel

Possibly the most famous song about trust on the list, ‘A Matter of Trust’, is all about the importance of trust in a relationship.

Joel had just married model Christie Brinkley the previous year to penning this tune, so he was undoubtedly full of optimism for the future. The lyrics read like a conversation with her.

“The closer you get to the fire, the more you get burned” one assumes he means infidelity. “But that won’t happen to us” he reassures her. “Because it’s always been a matter of trust.”

The song is also about being a realist: every relationship has a ‘honeymoon period’ that inevitably cools off after “a passionate start” between two lovers. Can you stick together when the chips are down? Be the only person? That’s the real test.

Billy Joel is the sixth-best-selling recording artist in the United States. He has written and recorded 33 – yes THIRTY-THREE – Top 40 hits!

“I Don’t Trust Myself (With Loving You)” by John Mayer

From the uber-talented John Mayer’s third album, Continuum, ‘I Don’t Trust Myself (With Loving You),’ sees him warning his lover not to trust him.

In a sentiment that’s reminiscent of Bob Dylan’s ‘It Ain’t Me, Babe,’ Mayer is urging her to beware because he knows he’ll bail out when times are tough:

“I will beg my way into your garden / Then I’ll break my way out when it rains.”

It’s quite honest of him, really.

Mayer has a neurological condition called synesthesia that causes him to see music as colors. He can hear the notes of songs and associate them with specific colors. That’s quite a gift for a musician.

Which is better to listen to? Your head or your heart? Your head lists all the reasons why you shouldn’t do it. Your heart says, ‘what are you waiting for?’.

According to this song written by the late, great Benny Carter, “if you’re smart, really smart, only trust your heart.”

Some of the things you shouldn’t trust: the stars, the moon, our dreams. The song shows us that working on instinct rather than reason is often the best.

Astrud Gilberto was a Brazilian samba and bossa nova singer who shot to fame with “The Girl from Ipanema”.

“Trust Me” by Janis Joplin

According to pop mythology, soul legend Bobby Womack recorded and worked this track up within a couple of hours for Janis Joplin.

It was a huge departure from anything she had done before with Big Brother and the Holding Company or the Kozmic Blues Band, highlighting her ability as a soul singer.

Tragically, it would prove to be one of Janis Joplin’s final songs, recorded on October 3, 1970 – one day before Janis’ death. It appeared on her 1971 posthumous release, Pearl.

“Love and Trust” by Ben Harper

From the Ben Harper and Charlie Musselwhite album No Mercy in This Land, ‘Love and Trust’ is a masterful old-time blues track with some gorgeous slide guitar from the multi-instrumentalist Harper. Musselwhite’s blues harp is the perfect counterpoint too.

“Give it some time don’t try to rush / When you’re trying to find yourself / Some love and trust.”

Harper is a ‘gammonologist’ – that is, he’s a champion backgammon player. He’s on record as saying “Is it a microcosm of life? It can be. Sometimes you’re trapped in the back and sometimes you’re cashing in your chips.”

“Trust No Man” by Jimmy Cliff

The theme of this classic reggae number from legend Jimmy Cliff is simple: you can’t trust your fellow man.

The song focuses on a man who had a (business, I assume) partner “since they were seventeen.” Then at the age of seventy-one, his partner shot him down “just for a pound.”

“Man to man is unjust / You don’t know who to trust / You’ll never know your friend / Until you find out in the end.”

Jimmy Cliff is better known as the writer of ‘You Can Get It If You Really Want’ and ‘The Harder They Come’.

“I Put My Trust in You” by John Lee Hooker

One of John Lee Hooker’s lesser-known tracks, but brilliant nonetheless, ‘I Put My Trust in You’ is a plain and simple song about betrayal.

He’s lost everything…his brand new car, his possessions, his home – all he’s got left “is on my back.”

“My friend tried to tell me / You didn’t mean me no good / I didn’t believe a word he said / I couldn’t believe it, whoo”

Hooker was the son of a sharecropper and rose to fame with his electric guitar-style adaptation of Delta blues.

“Trust Nobody” by The D4

If you feel like it’s you against the world, and you can’t count on anyone but yourself, then “Trust Nobody” should resonate.

The chorus says it all:

Apparently, even family members aren’t to be trusted: “But you know when push comes to shoving / Your brothers gonna leave you behind.”

The D4 was a post-punk revival band from Auckland, New Zealand.

“In Dust We Trust” by The Chemical Brothers

From their 1995 album Exit Planet Dust, ‘In Dust We Trust’ doesn’t have any lyrics – like most of their stuff – but it’s a good song with trust in the title, so that’s reason enough.

There are also some decent samples from the Beastie Boys track ‘The Maestro’ from their album Check Your Head.

Online privacy is a big deal these days. Social media companies are monitoring our every move, and people understandably have trust issues with what they do with our data.

This track by Jamaican reggae dancehall superstar Buju Banton (widely considered one of the most significant and well-regarded artists in modern Jamaican music) touches on his paranoia with modern technology, specifically smartphones.

Buju Banton was born Mark Anthony Myrie. Buju was the childhood nickname his mother called him and ‘banton’ is a Jamaican word for a respected storyteller.

Perri’s album Hand or Heart was inspired by failed relationships where she switched between trusting her head and her heart (the album is split into ‘head songs’ and ‘heart songs’).

In this, the opening song of the album, she lays herself bare:

“To trust myself / To trust someone else / To trust the doubt in the back of my mind.”

In the pursuit of fame and fortune, a young Christine Perri moved to Los Angeles on her 21st birthday. 3,000 miles away from her family in Philadelphia, she “cried [her] eyes out every day”. She rolled the dice, and it paid off big time.

Relationships are built on trust. It’s the most important thing for the longevity of relationships. Once the trust goes, love follows out the door soon after.

Bieber knows this too. Here we find him telling his girl, “he believes in love,” but they need to trust each other. That’s the challenge.

Bieber was the youngest solo male act to top the chart with his debut album ‘My World 2.0’ (the last person to do that was Stevie Wonder in 1963).

“Trust In You” By Lauren Daigle

A song by the brilliant Christian singer Lauren Daigle.

She wrote it “about trusting that the Lord is going to be there for you,” but the lyrics aren’t religious per se and work regardless of your faith or belief in god.

Diagle enrolled at Louisiana State University to study Child and Family Studies but ended up landing a record deal. With that voice, it’s hardly surprising.

American heavy metal band Megadeth are generally considered one of the ‘big four’ American thrash metal bands (along with Metallica, Anthrax, and Slayer).

In ‘Trust,’ the relationship is on the rocks because of all the lies, “betrayed by lust.”

“We lied to each other so much / That in nothing we trust.”

Ever met someone who was ‘bad for your health’? A bad influence on you? You know you shouldn’t be with them, but like a moth to a flame, you can’t help yourself.

That’s the essence of this song by the Jonas Brothers. The protagonist does “things I never do, acting like a damn fool.”

He knows he’s “better off without you,” but it’s no hope. He can’t imagine life without her.

“I don’t trust myself when I’m around you.”

“Trust in Me” by Etta James

Etta James has a distinguished yet troubled existence. She endured drug addiction, bad relationships, poverty, you name it.

In this desperately sad song, she sings to her Daddy to trust her – her Dad was thought to be the infamous pool hustler Minnesota Fats who she never knew (friends and relatives raised her)

Interestingly, you never think trust is an issue for parents of siblings, but there are many family songs that deal with this very topic.

Trust’s closest companion is honesty. By behaving honestly, you keep the trust alive.

In this song by Kodaline, vocalist Stephen Garrigan asks, “Is it in you to be honest?”

In an interview with The Sun, he admitted the lyrics were about “losing your trust in someone” (a person the whole band fell out with supposedly).

“Now I’m walking away ’cause everything that you say / All that you ever tell to me is lies, lies.”

“The Myth of Trust” by Billy Bragg

From Billy Bragg’s 1987 compilation album Back To Basics, this dark tale is about adultery and the challenges (and even unnaturalness) of marriage: “the facts of life are not man and wife / But Man and Woman sadly.”

Bragg was a talented songwriter and known for his bitingly intelligent words. So here he throws in some biblical references from the Book of Genesis (and why forever not!):

For example, the forbidden fruit (apple) in the Garden of Eden: “And the apple that don’t want to get eaten / Will still fall off the tree.”

Bragg enjoyed a lot of success in 80’s Britain, but only ever garnered a cult following in the US.

It’s easy to forget that long-term relationships are hard work. One partner, one love interest, day after day, year after year!

It’s no surprise then that many a pop song has been written about it – musicians don’t have a great track record of staying in long-term, monogamous relationships!