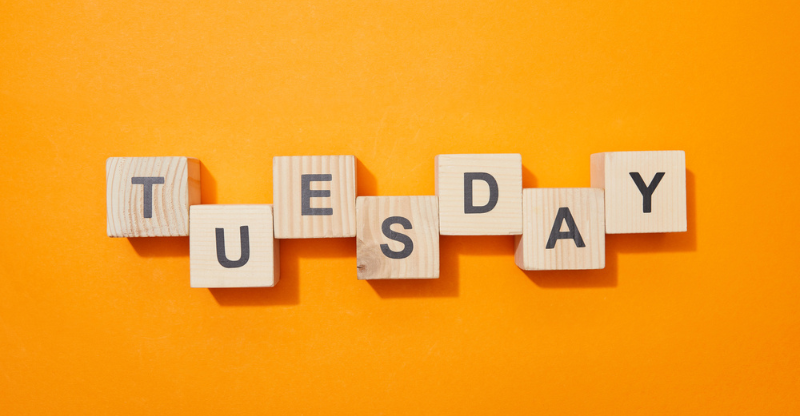 You made it through Monday. Yay!

To congratulate, here’s a playlist of songs about Tuesday, that most underrated day of the week.

Of course, ‘Tuesday’ doesn’t always refer to the day of the week, and sometimes refers to a woman’s name (see Lynyrd Skynyrd’s ‘Tuesday’s Gone.’) Have you ever met a girl called Tuesday? No, nor have I 🙂

Recorded by the Rolling Stones in 1966, ‘Ruby Tuesday’ became the band’s fourth number-one hit in the U.S. Cash Box describes the song as a “smooth ballad a la baroque.” The expression fits the song well, leaning away from the rock band’s sound most of us know. And yes, this song became the inspiration for the restaurant chain of the same name founded by Bob Hope and Sandy Beall.

Related: Before you go, check out the best songs about leaving.

‘Lockdown On Date Night Tuesday’ was inspired by lockdowns happening in 2020, featured on the Folk ‘N Roll Vol. 1: Tales of Isolation album by Ondara. The folk-rock song comes in on Ondara’s second album, all written, performed, produced, and engineered by the artist during a lockdown. The heartwarming song reminds us of the beauty of relationships and sweet memories of romance, no matter life circumstances. “I’m gonna put my grey suit on if you will put your red dress on. I’m gonna meet you at the dining table.”

Related: It’s tough when you can’t see your friends, so here are the best songs about loneliness.

Written and recorded by American blues electric guitar innovator T-Bone Walker, ‘Call It Stormy Monday (But Tuesday Is Just as Bad)’ is a rhythmic, bluesy classic from the 1940s performed in West Coast-style blues. Walker’s smooth voice and unique, early guitar skills rise amid the horns. The song became a record chart hit in 1948 and ultimately led B.B. King and other famous folks to take up the new-fangled electric guitar. Talk about influential!

Related: Find this song on our playlist of songs with Monday in the title.

Turkish artist Burak Yeter (D.J., record producer, and remixer) came into his own in the music world when he was 22 by performing at the MTV Dance Floor Chart Party in Malta. He completed second in the Miller Master DJ Competition that same year, helping to launch his career into the limelight. More than ten years after his initial career boom, Yeter released ‘Tuesday,’ which reached the #1 slot in multiple global charts in 2017.

Folk rock song ‘Tuesday Morning,’ recorded by The Pogues and released in 1993 as a single from their album Waiting for Herb, became their last single to hit the U.K. top 20. It’s also the first single they feature Spider Stacy on vocals, the song’s actual composer. The nostalgic song has a happy, upbeat vibe, despite hints of regret in the lyrics – longing for another time of daydreams and cuddling up together on a Tuesday morning.

Related: Wake up to these songs about the morning.

Written to the wife of Badfinger’s guitarist Joey Molland, ‘Sweet Tuesday Morning’ is a beautifully crafted acoustic song full of reminders of what true love looks like. “I’ve been to places all around, astound me, I’ve seen the breaking of the souvenirs. I’m in a brightness I can feel surround me, and it’s the first time I’ve felt it for years.” The song found its original home on Straight Up, the fourth studio album of the popular British rock band that was released in 1972.

Related: You’ll love this playlist of songs about true love.

In ‘Tuesday’s Gone,’ the name Tuesday belongs to a woman who’s been left behind. Dubbed an “I must be going now” song on the first album by Lynyrd Skynyrd, the song was partially inspired by the rhythmic passing of the nearby trains. “Train roll on, on down the line….” The song appears in multiple films, including Ash Wednesday, Boys Don’t Cry, Prefontaine, Happy Gilmore, and Dazed and Confused. It’s also made it into episodes of popular T.V. shows like My Name is Earl and One Tree Hill.

‘Tuesday Afternoon’ was a single released in 1968 by British symphonic rock band the Moody Blues from their 1967 album Days of Future Passed. The concept album was all about chronicling a “typical” day in the life. This song was part of the Afternoon track titled ‘Forever Afternoon (Tuesday?)’. Justin Hayward apparently wrote the song one Tuesday afternoon in a park where his mother took him and his brother as kids. He revisited Lypiatt Park and found the inspiration.

Coming from Cat Stevens (Yusuf), ‘Tuesday’s Dead’ is a steady, moody acoustic song reflecting on the world in the day. The folk-rock song was released in 1971 as a single across the world. The lyrics ask questions of faith, religious leaders, and others, searching for the meaning of life and someone’s place in this world and making a difference. “Yeah, we must try to shake it down, do our best to break the ground, try to turn the world around one more time. Whoa, where do you go? When you don’t want no one to know? Who told tomorrow Tuesday’s dead.”

“Sometimes a man just needs to be alone. Drive the Blue Ridge Parkway to the sky; I don’t know where I’m goin’.” The introspective song ‘Tuesday I’ll Be Gone’ by country singer John Anderson was released in 2020 on his twenty-second studio album. The song features guest vocals from Blake Shelton. The song is about uncertainty, freedom, and exploration in a style of country rock that easily could be mistaken for the early Eagles’ style.

A “new” American tradition, ‘Taco Tuesday’ finds reference in this hip hop song title by Migos. The rap song has a double meaning, of course, not really being about crunchy corn shells stuffed with meat, cheese, and lettuce. Instead, the song’s about intimate moments between the rapper(s) and romantic partner(s). The song has fun playing with food imagery as a metaphor.

Related: Fuel your Taco Tuesday with these songs about tacos.

On the debut studio album Sonic Flower Groove of Scottish rock band Primal Scream, ‘Gentle Tuesday’ was released in 1987. The album is a mix of Byrds-esque jangle pop and psychedelic rock. The song reflects nostalgia, romance, and unique imagery of both, with chorus lyrics giving the song its name, “Gentle Tuesday, sad and lonely eyes. Gentle Tuesday, see yourself tonight.” It’s another song naming a woman “Tuesday,” an intriguing lyrical theme found in Tuesday songs.

Related: Head over to our list of songs with women’s names.

Clear-voiced Margo Timmins leads the way through the reflections of a Tuesday morning as the sun strikes the eye at first rising. This alternative country, blues, and rock ballad from Canadian alt-country band Cowboy Junkies was released in 1990 on their album The Caution Horses. Nostalgia layers its way through the past, and present lyrics as the singer says farewell to a lover long gone, remembering past mornings when blinds are left open and no real regrets.

Related: Whether you’re dealing with a break-up or a death, here are sad songs about missing someone.

Pretty much all of us can relate to ‘Tuesday Heartbreak’ from Stevie Wonder. Most of us have fallen in love and been left behind for someone else. And sometimes, we just need a good song to say farewell to someone we wish we could still see. But longing for that unrequited love isn’t all bad, at least not while listening to this funky heartbreak song.

Related: Broken-hearted? Listen to our playlist of heartache songs.

Love isn’t just those big moments of white dresses, huge celebrations, and “picture perfect” days. Love is so much more, and specifically, “love is the Tuesdays.” This sweet, romantic love song by Jake Scott was written for his now-wife, Rachel. The gentle acoustic sound of the “love is the everyday” moments song is the perfect choice when you need to get a little romantic or remember that life isn’t just the big moments—and that’s okay.

Related: True love is one in a million! Here is a list of songs about soulmates.

Love You Till Tuesday – David Bowie

Written and performed by rock legend David Bowie, ‘Love You Till Tuesday’ comes from the singer’s early musical career. The sweet, “chill” love song was recorded in 1967 and was included on his debut album. Later that year, the song was re-recorded and released as a single, which drew music press attention briefly for the singer/songwriter. At that stage, though, Bowie wasn’t a legend and the song didn’t do as well as he’d hoped. It did later get more attention two years later when his promotional film took the song’s title and helped introduce him to a much larger audience.

A song of hope, ‘Tuesday’s Broken’ looks at the world’s tragedies and how we can lift up those who are deeply wounded, hurting, and in need of love. “The loneliness there wouldn’t leave him alone, but what if we try to reach him with words. What if we looked in his eyes and asked, ‘where does it hurt?’ Would he find all he was worth? Monday was hoping, but Tuesday’s broken.” When you need a reminder about the difference you might make in this world, ‘Tuesday’s Broken’ could be your song.

Related: Get inspired to create a better life with these songs about changing the world.

There are bands with unique names, and then there’s Neutral Milk Hotel. If you haven’t heard of them, the uniquely named group started in the late 1980s as a home recording project by Jeff Mangum, initially called Milk. Mangum learned another group named Milk had already claimed the moniker, so he changed the name to Neutral Milk Hotel from a suggestion of fellow band member Will Cullen Hart. The indie rock/psychedelic rock/lo-fi band purposefully recorded Tuesday moon in lower quality—it’s kind of their jam. It’s actually a more finished version of an earlier song from the project called ‘Love You On a Tuesday.’

With a distinctly country take on the song ‘Tuesday’s Gone,’ Hank Williams Junior gives the song a sonorous feeling. “Train roll on… I’m leaving my woman at home… My baby’s gone with the wind.” The reverberating emotion of leaving a loved one behind pierces through the country rhythms and acoustic guitar through Williams’ emotive voice. “Somehow I’ve got to carry on,” he sings, and you feel the question if he really can.

Punk rock band Bowling for Soup offers a high-energy punk-ska in ‘Cold Shower Tuesdays.’ It’s a definite break-up song, with the singer looking back at things he misses about the woman he broke up with. “She wanted in, I wanted out,” but now, maybe he regrets it a bit more than he thought would. The song is loaded with nostalgic references that many of us can relate to, like campfire cookies, Junior Mints, and John Hughes movies. If you’re feeling a bit nostalgic about one of the “what if” relationships, this song might just help you work through those feelings.

A Red Dirt, Texas country band with the distinctive flavor of Oklahoma and Texas music, the Josh Abbot Band nails it with the song ‘Tuesday Night.’ The nostalgic song reflects on youth, friends, and the need for a happy place found in the remembered Tuesday night. “Every once and a while, you need somethin’ to make you feel alright. Sometimes it’s just beer and tacos on a Tuesday night.”

Related: Keep your Tuesday night going with the best songs about alcohol.