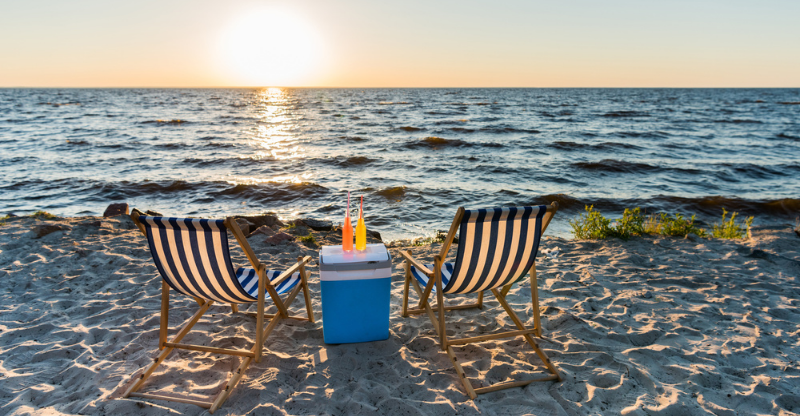 Daily life can really grind your gears and make you want to get out of town! If you’re dreaming of getting away, let this playlist of songs about vacation be your ride to a tropical beach somewhere far away. It may not make your boss go away, but it can at least help you chill out!

So sit back, turn the volume up, and pretend like Monday doesn’t exist. You’ll be dreaming of “a big umbrella casting shade” like Blake Shelton in no time.

You’ve probably heard that if you love what you do, you’ll never work a day in your life. That’s the vibe Dirty Heads has in this song. The daily grind always feels like a vacation because they love making music and performing. This song came out in 2017, but TikTok breathed new life into it in 2021.

Lead singer Ezra Koenig got the inspiration for this song when one of his family members decided to become a vegetarian after the US invaded Iraq. Koenig said it was more of a physical reaction than a protest. The song is about wondering if taking a vacation would ease the mind from worrying about the world’s troubles.

This song is a parody from the comedy duo Rhett & Link. Throughout the song, they tell of their vacation misfortunes, like misspelled airbrush T-shirts, getting their identities stolen, and a zombie apocalypse. But there’s no need to worry—they’re on vacation, so they’re chill about it! They also poke fun at how people make frivolous purchases while on vacation because their fun clouds their judgment about things they’ll actually use.

If the minor annoyances of each day add up and make you dream of escaping to a tropical paradise, you’ll relate to this song! ‘Some Beach’ uses the titular phrase as a clever way to call someone a less-than-nice name while also dreaming of getting away to the ocean. It charted at number 28 when it was released in 2004.

Island in the Sun – Weezer

The singer dreams of running away with someone and living carefree on an island with them. It charted at number 31 in the UK and 33 in the US. While it wasn’t super high on the charts, it’s their most-licensed song and has been covered multiple times. Some people consider it their best song, while others think it’s their most overrated.

Related: Find this song on our playlist of songs about sunshine.

No Shoes, No Shirt, No Problems – Kenny Chesney

Kenny Chesney is looking for time away at the beach in this song after working six days a week. He wants to head to Mexico and enjoy bottomless drinks in the sand while ignoring everything happening back home. Don’t we all? The song charted at number 28 in the US, suggesting that many people could relate!

Related: Kick back and relax with these songs about the beach and ocean.

Here’s another great song about a weekend that goes awry in Amsterdam. The deftly written words are open to interpretation, but it appears the narrator has the experience of a lifetime in the beautiful Dutch city, known for its liberal attitude to certain substances and those ‘ladies of the night.’

Born to Be Wild – Steppenwolf

The classic track that appears in the ultimate 60s stoner movie, Easy Rider. Motorcycles have an inherent “cool factor” that immediately associates them with being wild and free, which is what the songwriter wanted to convey with this song. You have to stand back and admire the term ‘heavy metal thunder.’

Related: Improve your vacation with these songs about traveling.

No list of vacation songs is complete without this classic! Bass player Kathy Valentine wrote ‘Vacation’ after she met someone on a trip. She didn’t get to see him again, so the lyrics came from real longing and regret. She played the song with The Textones, but once she joined The Go-Go’s, they rewrote some parts of the song, and it made it to the Top 10 in the US.

Related: See more songs about wanting someone you can’t have.

Willie Nelson wrote this song for the film he starred in, Honeysuckle Rose. While the movie didn’t do well, ‘On the Road Again’ charted at number 20 in the US and went on to be one of his most memorable songs, and perhaps one of the best vacation songs. He started writing the song on a plane using a bag for air sickness since that was the only paper available.

Soak Up the Sun – Sheryl Crow

While this song isn’t directly about vacations, the chill vibes it encourages are perfect for listening to while you’re having a relaxing vacation. The song reminds you to stay positive while everything else is trying to bring you down. The singer mentions her less-than-ideal situation in life and shows that you can still make the most of it with just a little optimism. The song charted at 16 in the UK and 17 in the US.

A pontoon is a floating bridge or a small boat that holds the floating bridge, which can be associated with lakes. This song came to be because someone misheard the working title ‘Fine Tune’ as “pontoon.” Little Big Town thought it would be a good title since lakes and country music goes together well. Since nobody had made a pontoon song yet, they knew they had to do it.

The Beach Boys weren’t topping the charts anymore when they were asked to write a song for the film Cocktail, but since they were known for playful songs, they were chosen for the job. This song made it to number 1 in the US and 25 in the UK. They released it before the film, but it didn’t become a hit until after the film was released.

Zac Brown heads to a tropical beach somewhere in this song and spends four days with tequila, ladies, and his guitar. The ladies he spent his time with didn’t want him to go until they realized he had no more money! Brown wasn’t ready to go home just yet, so he dug his toes into the dirt while relaxing in a lawn chair, hoping to get a sliver of the paradise he’d left behind.

Related: Enjoy a night out with songs about tequila.

This song is considered a road trip classic, perfect for listening to when you’re headed to your vacation destination. It was written for the 1983 film National Lampoon’s Vacation and played at the beginning with the opening credits. It’s a simple song that doesn’t say much, but it’ll make you want to get in the car and go somewhere! The song charted at number 82 in the US when it was released.

Related: Head out of town with these songs about road trips.

‘School’s Out’ was released in the summer of 1972 when schools really were out for summer break, making it easy for this song to become the summer vacation anthem. The song celebrates not having any class all summer long and jokes about how kids lack intelligence while out of classes. The song charted in the Top 10 in the US and UK.

Related: You’ll love our playlist of the best summer songs.

This song has been everywhere! It was originally written by an Australian songwriter and singer Geoff Mack and recorded by Leslie Morrison (Lucky Starr). The original version listed Australian cities. In 1962, Mack used a map to list cities in the US, and Hank Snow sang it. Johnny Cash released his cover in 1996.

‘Margaritaville’ has become the anthem of a Caribbean lifestyle that’s carefree, chill, and has plenty of margaritas! Jimmy Buffett wrote this song in Key West after traveling around Texas, so margaritas and beachy vibes were on his mind. Buffett now owns stores of the same name as the song that sell tropical-themed goods inspired by the song.