19 Songs about Weather and Different Types of Weather 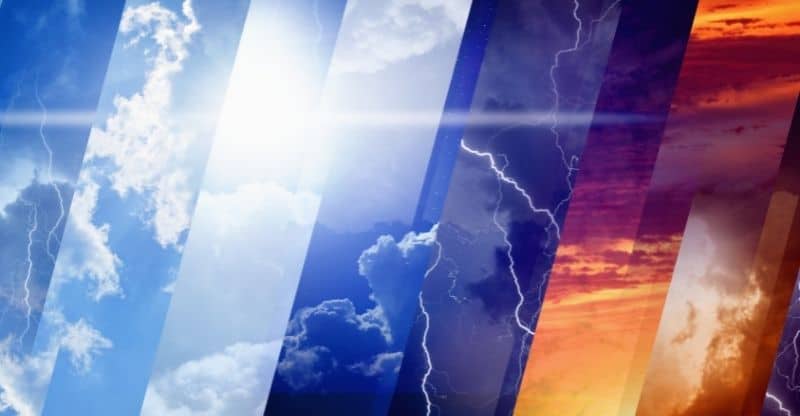 Weather controls what we do more than we realize. It not only controls whether we head to the beach or stay wrapped up indoors, it even affects our mood.

It’s no surprise that the different types of weather have been used in countless songs, often metaphorically.

In this article, we’re going to look at the best songs about weather – from sunshine to snow, and everything in between. Grab your raincoat :p

A brilliant blue sky is a common metaphor for happiness and good times. Moodiness is often depicted as stormy, grey skies. Blue skies, as we hear about in Mr. Blue Sky, are about love and freedom. This is one of the most optimistic songs ever written, and it is the perfect tribute to the source of pretty everything in our world (including us), the sun.

Related: see our playlist of songs about the sky.

Have You Ever Seen the Rain? – Creedance Clearwater Revival

A reminder that what normally comes after a period of sunshine is a touch of rain. This was the case for singer John Fogerty, whose brother and bandmate decided to part ways with the band just when things were going great for the band. Bummer!

His brother’s announcement was the inspiration for this song, so you’d have to say he did John a favor (in hindsight).

Related: see our full list of songs about the rain.

Riders on the Storm – The Doors

This was the last song The Doors’ frontman Jim Morrison ever recorded. With Ray Manzarek’s Rhodes piano and the menacing lyrics about a hitchhiker killer on the road, it’s an atmospheric, dark piece of music.

The song has a philosophical edge too, with the line “into this world we’re thrown” (a nod to Heidegger’s notion of ‘thrownness’ discussed in this Guardian article).

In this autobiographical song, Young encounters a girl in a dingy bar and becomes totally obsessed with her. There’s calm in her eye (just like in a real hurricane), but he gets blown away every time he gets close. It’s a great track with a blistering bit of guitar lead.

Related: we feature this classic in our songs about hurricanes playlist.

Down in the Flood – Bob Dylan

One of Dylan’s lesser-known songs, but still brilliant (if you’re familiar with the Bootleg series, you’ll appreciate just many quality songs like this he wrote that went unreleased.)

Texas-born Stevie Ray Vaughan was hands down one of the best guitarists to ever grace this planet of ours before his tragic death in a helicopter crash. In this song, we hear his mesmerizing talent on display.

Here’s a song about a runaway criminal escaping to Mexico, by this Australian songwriter Christopher Cross. The Eagles Don Henley helped out on vocals.

Related: check out our playlist of songs about the wind.

If you live or have ever been to England, you’ll know all about cloudy weather. It’s probably why there are so many great songs about clouds too, just like this one. The singers’ thoughts are “scattered” and cloudy.

Also, see ‘Touch of Grey’ by the Grateful Dead where the color grey is used to denote hard times (featured on our list of songs about not giving up.)

Ok, we can’t mention the weather without talking about rain. If you live in the UK (like I do), you have a love-hate relationship with rain. Well, mostly hate.

This funky number is all about the adventures of a certain woman called ‘rain dance maggie.’ The video was recorded on a rooftop at Venice Beach, inspired by The Beatles’ final rooftop gig at Abbey Road Studios.

Sandstorms are an aggressive bit of weather. In this song, there are no lyrics at all, and I’ve no idea really why it’s called sandstorm, but it’s a pretty cool tune and the video is rather captivating.

Considered one of Springsteen’s greatest songs, ‘Thunder Road’ portrays a young woman (Mary) and her boyfriend, who have “one last chance to make it real.” This classic tune also includes the line “you ain’t a beauty, but hey, you’re alright” which actress Julia Roberts said in an interview best describes her.

Here’s a song by British alt-rock band Arctic Monkeys about a girl who is hard to get (she plays ‘crying lightning’). He knows she’s playing games, but he can’t resist.

Related: see our list of songs that mention lightning in the lyrics.

In this classic song, Harry Nilsson declares he’s had enough of modern life (“everybody’s talking at me”) and he’s sick of the cold weather. So he’s “going where the weather suits my clothes,” and plans to sail away “on a summer breeze”. Where do I sign up?!

She’s a Rainbow – The Rolling Stones

Is a rainbow a weather condition? Perhaps not, but for the purposes of this list, it’s close enough. Released in 1967, this was the Stones doing psychedelic – and a pretty fine attempt it is. The piano arrangement by Nicky Hopkins is particularly good.

With an ’80s retro synth vibe, this isn’t really a song about tsunamis, but rather about ‘starting a love tsunami’…if you dare to imagine such a thing.

‘The Fog’ is a song about trying to grow up from Kate Bush’s superb The Sensual World album. It features the voice of Dr. Bush (Kate’s father), and superb violin from Nigel Kennedy.

A song all about a scorned woman who’s compared to a tornado. The singer has been betrayed and is ready to get her sweet revenge.

When you had everything, and you’re left with nothing, sometimes you have to just accept you’ve had a bad run and enjoy the simple things in life, like a sunny afternoon. This Kinks song knocked The Beatles’ ‘Paperback Writer’ off the number 1 spot in the UK.

You can’t beat a blanket of freshly laid snow. There’s something incredibly peaceful about it, hence why people spend thousands taking their kids of Lapland (the home of Santa Claus) in Finland where you’re always guaranteed some snow. Here, Sinatra summons the heavens to let it snow. Well if Old Blues Eyes couldn’t do it, no one could!

Related: check out our playlist of songs about snow for more.

Love is Like a Heatwave – Martha and the Vandellas

Have you ever been so in love that it feels like a heatwave running through your body? This classic Motown number, written by the esteemed Holland-Dozier-Holland songwriting team, was their first Top 10 hit in the US.

It also paved the way for what would become the ‘Motown sound,’ and the rest is history.

Related: this song appears on our playlist of songs about heat.