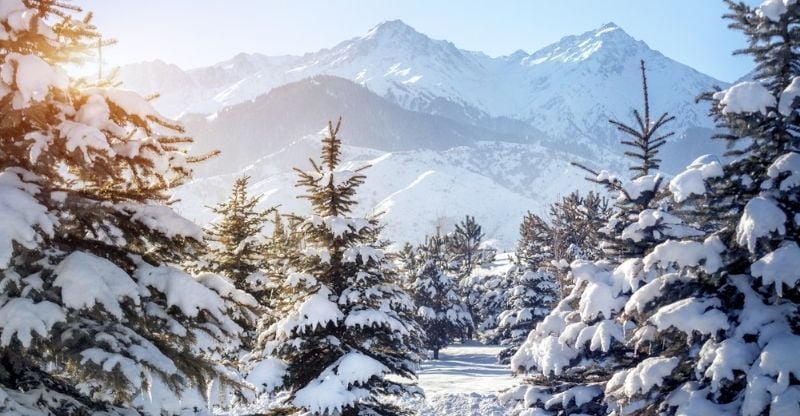 What is it about winter that turns everyone introspective and gloomy? Is it prolonged darkness or cold temperatures? Who knows. But one thing is for sure, the coldest season of the year has been an inspiration for songwriters ever since songwriting began.

So wrap yourself up warm, stick another log on the fire, and enjoy this list of songs about winter.

You may find that this song has some lonely holiday vibes since it appears that the singer is especially lonely now that Christmas has come and gone. The song uses winter as a metaphor for bad days and the warmer months for good days. So, when he says, “I hope it’s gonna be a long hot summer,” he’s hoping that he’ll be able to find a lover and be happy once again. If you’re not a fan of the cold, dark part of the year, you could totally take this song literally!

This song was written from the perspective of someone at the end of their life who has many regrets for being a picky person. Winter is a metaphor for the last years of life, and the singer sees winter approaching as he looks back and wishes he had been easier to please. The song isn’t too specific, but you could assume that he regrets not finding a lover and is now living out his old age alone.

You can interpret this song in a few different ways, but many believe this song to be about waiting for your muse. Neil Young sings of waiting for his muse to get inspiration, but then he became complacent with his life, and then one day he realized his muse was gone and it was too late to get it back. Maybe this muse was a person who moved on without him or was something he couldn’t get back. Other interpretations suggest this “muse” was a certain something that allowed him to hallucinate good ideas.

‘Wintertime Love’ is about finding a lover to spend time with in the cold months. The physical and emotional warmth a lover provides is enough to keep the winter blues out of your mind. It seems like the singer is actively trying to convince a lover to be with him since he says, “my wintertime love to be.” Perhaps they’re at a December party, and he just met someone? The song is hopeful and sweet, making it a good one to sing to your lover by the fire.

Lead singer Robin Pecknold said that this song was intended to be an easy sing-along song that you can hum while you work. The lyrics were intended to be somewhat pointless on the surface, but they actually tell a story of a child falling victim to peer pressure and going down the wrong path. The snow represents innocence, and Michael falling and turning the snow red shows that he started making bad choices. The singer had to watch Michael make wrong decisions as he continued to follow the good path.

This song is about lead singer Anthony Kiedis’ struggle with addiction. The “snow” in the song is very much a euphemism for his bad habits, but it also doubles as a metaphor for a blank slate. Kiedis wanted to overcome his struggles, and when he was finally ready, he saw a blank slate before him filled with opportunities to do better. The singer is hopeful for a better future where he can stay strong and go the direction he wants to go.

Kanye West wrote this song in 2008 as a tribute to his mother, who passed away the previous year. Winter is used as a metaphor for the hard times in life, so Kanye is saying that his mother was always there for him when he needed her. He borrowed “goodbye my friend, will I ever love again?” from ‘Memories Fade’ by Tears For Fears. The song may also double as a goodbye to one of Kanye’s former lovers who he broke up with around the time he wrote this song.

Winter In My Heart – The Avett Brothers

Winter In My Heart’ provides beautiful visuals to represent melancholy feelings. The singer wonders why everyone else is happy when he can’t be himself, and it’s clear that he’s tried to move forward. The song isn’t specific about what’s causing the feelings, so listeners can apply it to their lives as they see fit. It could represent the sadness after losing someone special, but it works well to describe the seemingly unreasonable sadness that comes along with depression.

This song is for all those hot climate dwellers who have never seen snow before! It’s about trying to pretend that the world is glistening with freshly fallen snow so you can do “winter things” like sledding, building snowmen, or sitting cozy by a fire. Your sunny winter activities will probably look different than those who live with blizzards, but you could probably find something somewhat wintery to do with your lover…you just won’t get to wear a parka and boots!

My Love Is Winter – The Smashing Pumpkins

Winter is the time of year when animals hibernate and plants die back, so comparing love to winter is saying that love has died. Perhaps it’s because the relationship failed or a lover cheated. Whatever the event was, the singer feels as though love has left him, and it’s all over. There’s a hopeful tone in the song, however. Winter doesn’t last forever, and eventually, people can move past their heartbreak. The song ends with “There is love, love, love,” suggesting that there is love out there. It just may take some time to find it again.

Many people interpret this song to be about poverty during the harsh, cold part of the year. The people in the song burn tires and pianos for warmth and have nothing to do but drink when the roads are too bad to head out. “Times Square is a dream” suggests that the people believe they’ll never be able to get out of their situations and make lots of money, or perhaps they think they’ll never even get a sightseeing vacation.

The Hounds Of Winter – Sting

In this song, the singer is lamenting the loss of a lover. It sounds as though this woman has passed away since the singer says “I will surely, surely follow” and speaks of her in the past tense, making it sound like she’ll never come back. The song’s setting is winter, but the cold and darkness of the season also convey how cold and dark the singer feels in his heart without this woman in his life.

This repetitive song is about feeling lonely and looking for someone to spend the cold months with. The singer could be looking for a new lover, an ex, or even a family member or friend to talk to on his loneliest days. The leaves have died, and the birds are gone, making the singer feel completely lonely since even nature has left him. “Hear me calling” could be symbolical, like he’s yearning for someone has he sits alone, or it could be literal like he’s calling someone on the phone.

‘Winter Song’ is another song comparing winter to the end of love, but hopefully looks to spring, which is the beginning of love. The holiday-filled month of December just doesn’t feel right to the singer without her lover, and she questions love altogether because she doesn’t have it. But, the singer says, “I still believe in summer days,” so she knows that the bad times will get better, so she just has to bundle up and make it through this cold winter—physically and metaphorically, of course.

This song is based on an experience Wyatt Durrette of the Zac Brown Band had. He loved a woman who wanted him to stop traveling to be with her, but he couldn’t do that because he wanted the band to take off so he could achieve his dreams and make music. He planned to visit her, but the snow prevented him from traveling, making her angry. He came up with the chorus, and the rest of the band helped with the rest of the song.

This melancholy song is about how the singer waited too long to confess his feelings to someone, and now it’s too late for them to be together. The song is vague about the situation, but it seems like the person the singer loves is in love with someone else but may have feelings for the singer. So, the singer is trying to convince them to give him a chance and to admit those feelings, as minuscule as they may be.

If you’re feeling sad on a wintery night, this acoustic blues song is perfect for laying in the dark and feeling sorry for yourself. (You’re not the only one who does this!) The singer feels lonely without his lover, who won’t answer him when he calls her. He says he’s going to go south where the weather is warmer “and let this winter pass on by.” Whether that’s meant to be literal or symbolical is unclear. Perhaps he means he’s going to surround himself with warm, friendly people since his lover was so cold toward him.

This song paints a beautiful picture of a winter scene. You can picture exactly what the place looks like as Freddie Mercury sings about the kids, birds, and magic. He wrote this song based on what he saw as he looked outside the window at the recording studio in Switzerland. Freddie wrote this song and recorded the vocals just a couple of weeks before he passed away, and the song wasn’t released until four years later.

California Dreamin’ – The Mamas and the Papas

If you’re trudging through the snow on a cold winter day, you’re probably dreaming of warm weather. That’s what this dreamy song is about. The singer’s dream of what Los Angeles would be like in winter—no snow, no dead leaves, and no cold weather. They wouldn’t have to seek warmth in a church. The grass is always greener, and the snow is always whiter, on the other side, of course. Just compare this song to Ariana Grande’s ‘Winter Things!’

After talking to her father about not feeling good enough after her first album didn’t do well, Tori Amos wrote this song. Her father told her that she needed to be good enough for herself because that’s all that really mattered. The white horses in the song are a metaphor for dreams, and the song talks about how we’re never too old to chase our dreams; we can never grow out of what we’ve always wanted.