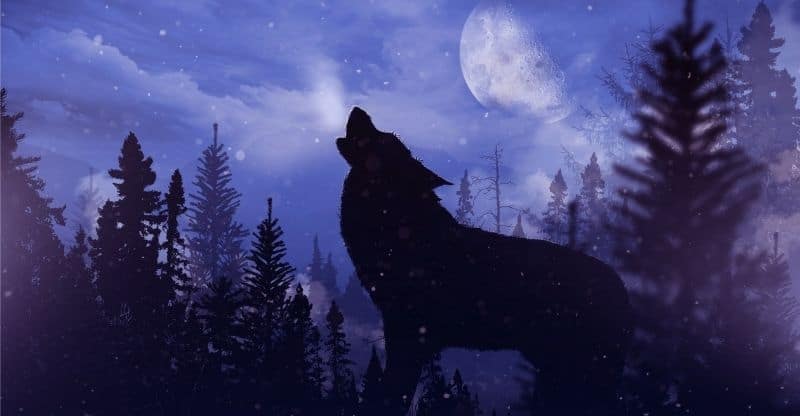 Wolves are a constant source of mystery to humans, so it’s no surprise they feature a lot in songs. Probably because they’re wild, and sometimes a little scary.

They’re mostly used metaphorically (to depict the ‘wild’ side of the human spirit), and of course, the werewolf or ‘wolf man’.

So here are the best songs about wolves. Curiously, there are tons of great indie wolf songs! No bad thing 🙂

This song from North Carolina duo Mandolin Orange is a superb song for our times. I agree with this interpretation of the song. The woman in the song is the statue of liberty who “stands, so tall and mighty, her gaze facing the east,” but we turn away the poor and huddled masses.

“Everything’s so great, it can’t get better,” we like to think, but that makes him want to cry, so he’ll “go out howling at the moon tonight.”

Wolf Moon is a highlight of Young’s last few years. He plays it here with Willie Nelson’s sons, Lukas and Micah (collectively known as ‘Promise Of The Real.’)

It’s one of Young’s best environmental songs, alongside, well, lots of others such as ‘Mother Earth’ and even as far back as ‘After the Goldrush.’

Here, “Wolf Moon” is the natural world, which Young depicts as being in trouble (“Less fish swimmin’ in your oceans / old ice floating in your seas”). “Still, you hold against the constant plundering,” the lone wolf Young concludes.

Bon Iver’s Justin Vernon never makes particularly easy-to-understand songs. However, this one is generally considered to be about a breakup.

Quite whether it’s him that’s been dumped or him that’s done the dumping, I have no clue. See what you think. I particularly like the line “your eyes are all Sinatra blue.”

‘Howlin’ for You’ – The Black Keys

The Black Keys are one of the best alt-rock bands of recent times. This wolf song is about being so bowled over with a girl it makes you want to howl (“Baby I’m howlin’ for you.”)

More songs from the Black Keys if you want more:

‘A Wolf at the Door’ – Radiohead

A song about keeping the wolf from the door who’s there to come and “mess you up.”

In the song lyrics, it’s not apparent what or who the wolf is. It’s likely not one thing, but a general weariness with the world, such as bankers (“investments and dealers”) and rich kids (“boys in first class don’t know we’re born”).

The little-known Bonnie ‘Prince’ Billy is one of the best songwriters and singers of our time. But, unfortunately, it’s just hardly anyone knows about him. Well, if you’re reading this, that’s one less.

Here’s a tremendous growing-up song that uses the metaphor of the wolf (and the pack).

It starts with the narrator at age 17. He finds his “pack” and ‘runs’ with them on the hunt but loses “the taste for judging right from wrong.” His flesh has turned to fur (he’d turned ‘wild.’)

At 23, he meets a girl who goes “shaky at the knees,” and they settle down and raise a family on a farm.

In the final verse, he admits, “I still dream of running careless through the snow” but realizes how much he’s learned. “So if you’re gonna’ get made, don’t be afraid of what you’ve learned.”

Another treat for you here. This song is about trying to live with people who “build pillars around their hearts” as a form of self-defense.

He can’t live with them – he’s “too gentle to live amongst wolves.”

‘Howl’ – Florence and the Machine

Howl is a gothic horror love song about the monster within you (“if you could only see the beast you’ve made of me”).

It would make a suitable addition to your Halloween playlist!

There’s no mention of wolves in this song, but it comes from their superb album Hombre Lobo, which is Spanish for ‘Wolf man,’ so that’s close enough 🙂

It’s a concept album about desire from the point of view of a werewolf. Now there’s something you don’t come across every day.

“Mama there’s wolves in the house” is a plea for help.

From what, it’s not entirely clear and is totally up for interpretation. Some think it’s depression, being trapped by another person, mental illness, the list goes on. But one thing for is sure. Everyone loves its gorgeous vibe.

Related: see our playlist of songs about being trapped.

Here, Bono looks back to his earlier days when a series of car bombs exploded in his hometown of Dublin. The event had a profound effect on him.

One of the car registration plates was “1385-WZ”, which is mentioned in the song.

There’s no mention of the wolf in the song, but I think it earns the right to get included as it’s featured in the ’80s horror flick An American Werewolf in London.

To this day, I can’t hear this song without thinking of the final credits (where the song is played) at the end of the movie. Watching that film as a kid was quite an ordeal!

As the song is about the end of a relationship (the narrator’s been dumped), The Wolf is the other guy, “he wanders ever closer every night, and how he waits begging for blood.”

Of course, the wolf could refer to him and his insatiable appetite.

Here’s a song that’s generally believed to be about the genocide of the Native Americans (in the 19th century). The brother is the Wolf, the sister is the Moon.

Check out our post songs about the Moon for more lunar-themed songs.

Let’s jump back to the ’80s with this classic pop song by Duran Duran.

According to singer Simon Le Bon, the words were inspired by the fairy tale Little Red Riding Hood (where the Big Bad Wolf appears).

More songs about wolves (if you needed more!)