20 Great Songs about Writing and Writers 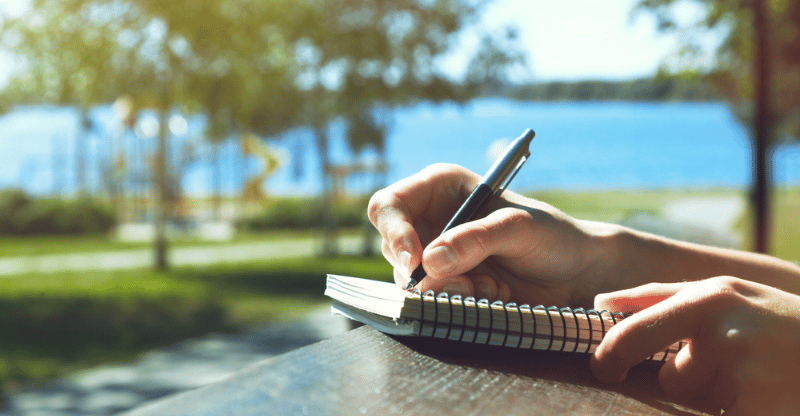 Musicians are always writing songs, and some of those songs are actually about writing. So meta!

These tracks talk about poetry, novels, grammar, and more! Even if you’ve never considered yourself a writer, the emotion present in these tunes is universal. Get ready to be swept into moving narratives and unique styles with these amazing songs about writing or writers.

The Beatles wrote this song from the perspective of someone who dreams of being a novelist. The protagonist works at the Daily Mail, writing short articles that don’t give him any fulfillment. The man is desperate for someone to publish his book, repeating throughout the song, “I want to be a paperback writer.”

Twirling guitar gives this track a folksy feel, spotlighting the story of a man with a lot of regrets. The central metaphor of the song is that the narrator longs to rewrite his life as if it were a book. He would change the ending, and all the things he’s not proud of, so he could escape the shame of his real life. For example, he says, “I’ll eliminate the pages where the father has a breakdown and he has to leave the family.”

Surreal imagery and comical lines are the backbone of ‘I’m Writing a Novel.’ It sounds like the narrator has gone to Hollywood to write a novel, but keeps getting distracted by drugs and celebrities (who might just be a hallucination from the drugs). It’s a full circle moment for writer Josh Tillman, who went to Laurel Canyon to work on a novel but ended up creating this song (and the album it’s from) instead!

The Letter – The Box Tops

If an ex-partner wrote you a letter saying they wanted you back, what would you do? Well, one option is to drop everything and get on a plane to see them, which is what the narrator in this song does! He has no time to spare, because nothing is more important than getting back to his love.

Elvis Costello sings about his love as if it is a book in this swaying song, singing lines like “chapter one: we didn’t really get along, chapter two: I think I fell in love with you.” He documents the good and the bad as to not forget even a moment- a pretty sweet sentiment overall.

Vampire Weekend calls out people who are annoyingly pretentious about the “correct” use of language and grammar, asking if it really matters at all. The oxford comma and its use is debated, especially among journalists, but Vampire Weekend thinks the only thing that matters is effectively getting across the meaning of what you’re saying.

Book Of Love – The Monotones

Love can be complicated, and it often makes you wish that there was some kind of instruction manual. Luckily, this song gives you one! First, “love her with all your heart,” then tell her you’ll never part, then “remember the meaning of romance,” then… break up. But give her one more chance!

Elton John pours love into this song, revealing to his partner how deep his feelings truly run. He knows he can’t offer this person everything, but he gives everything he has, singing “my gift is my song, and this one’s for you.” John’s life is made better just because of the other person’s existence, and he makes that clear with every lovesick line of ‘Your Song.’

This old bluesy track features subtle horns and twinkling piano. Fats Waller is feeling desperately lonely in this track, and resorts to writing himself a love letter and pretending it came from his ex. He wishes this person was still in his life, but he’ll have to do with make-believe.

Stereophonics express their frustration with some journalists in this tune filled with attitude. Sometimes, media outlets print things to grab people’s attention and don’t concern themselves as much with the truth- this seems to be especially true in today’s pop culture. This song calls them out, singing “Mr Writer, why don’t you tell it like it is?”

Has Anyone Ever Written Anything for You? – Stevie Nicks

This song has quite an emotional backstory. Joe Walsh, from the Eagles, lost his young daughter in a car accident and wrote a song in her memory. Stevie Nicks wrote this song for Walsh, wanting to provide him comfort and love during his endless mourning. The piano ballad is sweet and moving, and a reminder to always tell our loved ones how much they mean to us.

Ernest Hemingway is a well-known author but also a lesser-known alcoholic. Kenny Chesney admires Hemingway’s outlook on life (and whiskey) in this song. The country ballad features strings and plucked guitar, setting up the introspective tone of the lyrics. The line “there’s more to life than whiskey, there’s more to words than rhyme” particularly captures the search for meaning present in this song.

Write About Love – Belle and Sebastian

Writing is a creative form of escapism. When you’re not satisfied with your own life, writing about someone else’s might offer some relief. Giving fictional characters (which may just be a version of yourself) riveting love stories is one way to temporarily heal loneliness. This song encourages you to use your imagination, saying “you’ve got to see the dream through the windows and the trees of your living room.”

A Poem On The Underground Wall – Simon & Garfunkel

Poetic imagery and suspenseful production tell the story of an artist in the subway tunnels, awaiting a chance to graffiti the walls in a form of self-expression. The artist paints “a single-worded poem comprised of four letters” on the tunnel wall, leaving you with a mystery you’ll never be able to solve- what is that four letter word?

Electronic guitar riffs and a steady drum beat draw the listener into the emotion of the song, making you hang on to the narrator’s every word. He talks about how seeing a ‘Lady Writer’ on TV has reminded him of his ex. The simple style of her hair brought all the memories of the relationship crashing back.

The Wrote & The Writ – Johnny Flynn & The Sussex Wit

This song has many layers, featuring the narrator speaking with candor about Catholicism and how it has affected him. It feels like his own beliefs are not solidified, as he feels ties to religion but also has problems with it. He may be referencing religion in general, but the line “I’m being asked to drink the blood of Christ and soon I’ll eat his flesh” references a Catholic practice.

The muse of this song is a woman who is so charming it feels like she’s writing a novel with the things she says and does. It feels like she is fictional, an ethereal girl you just can’t pin down. The line “you think she’s an open book but you don’t know which page to turn to” reveals that she is much more complicated than you would think at first.

Johnny Cash is going through it in this song, feeling lonely and depressed because of a failed love. He decides he’s going to “write a tear stained letter” and mail it to his ex, hoping to make her feel as sad as he is feeling. Cash might even be hoping that the sadness they’re feeling while apart will make them seek happiness together.

In the midst of an argument, it can be easy to panic and lose your train of thought. The narrator of ‘Box Full of Letters’ seems to be experiencing that, searching for the right way to articulate his thoughts and failing. The other person ends up leaving him because he just can’t explain himself, and he’s left with a box of letters that only he will ever read.

There She Goes, My Beautiful World – Nick Cave and the Bad Seeds

Nick Cave sings about writer’s block and love in this song- the intersection of the two things musicians know the most about! He wants his art to be everlasting, and beautiful enough to keep his love interested in him. But, as he compares his art to the many famous poets that came before him, his confidence in his abilities dwindles.