28 Best Songs for Halloween to Give Everyone a Fright 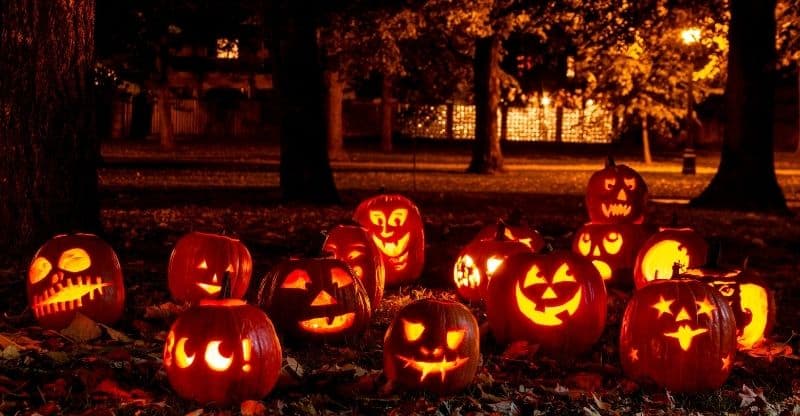 Are you planning a Halloween party? Or maybe you need some music to play in the background when the kids come around trick or treating?

So, here’s our playlist of the best songs for Halloween. We have novelty songs like ‘Monster Mash’ that the kids will love. Songs to make you boogie like Michael Jackson’s ‘Thriller’, and some seriously creepy ones like John Carpenter’s theme tune from his movie Halloween.

Whichever you choose to play, have a great time – and Happy Halloween!

‘Monster Mash’ was number one in the US in 1962, just before Halloween that year. It’s been a perennial favorite ever since.

The idea for the song came about when Pickett made an impression of the actor Boris Karloff (the monster in many Frankenstein movies).

The dance is based on the ‘mashed potato’ dance that was all the rage back then (hence why it’s ‘Monster Mash‘).

This theme for the 1964 TV series The Addams Family was composed by Vic Mizzy, a longtime Hollywood film and television composer.

With its use of harpsichord and those finger-snaps, it’s unlike anything else you’ve ever heard and is a must include on any Halloween playlist.

What is Halloween without some ghostly goings-on? And for that, you absolutely must include the Ghostbusters theme song.

The music video is a case of spot the celebrity, with everyone from John Candy to Peter Falk (Colombo) putting in a cameo performance.

The song is the perfect Halloween party tune. The creaky coffin door, the narration (by horror legend Vincent Price), the wicked laugh at the end, it’s all perfect. Plus, it’s funky as hell.

And then there’s the music video. What can I say!

Directed by John Landis (An American Werewolf in London), it’s pretty much guaranteed to scare the pants off most kids (including myself, I couldn’t sleep for days after seeing it).

Need to get the party started? Well, you’ve just hit the motherload with this one.

The Time Warp, from cult movie, The Rocky Horror Picture Show, is guaranteed to get people up and moving.

There’s a whole set of dance moves to go along with it, too (involving a fair amount of hip gyration!), so be sure to learn them.

Here’s a bit of paranoia to add to the spooky vibe!

‘Somebody’s Watching Me’ is about a guy who’s freaked out and feels like he’s in “The Twilight Zone.”

It’s sung by Rockwell (Motown chief Berry Gordy’s son) with a bit of help from Michael Jackson on the chorus, too, which pretty much guaranteed the song’s success.

‘Season of the Witch’ – Donovan

Witches need to get a mention too, it’s Halloween, right?

This psychedelic song should do the trick. It’s a bluesy jam that is a really good song (it’s rumored Jimmy Page and John Bonham from Led Zep play on it).

Lindsay Planer at Allmusic calls the song “a chugging eve-of-destruction tale.” I think that sums it up perfectly!

You might not typically think of ‘Superstition’ as fitting for a Halloween party playlist, but it’s a perfect choice.

It’s full of references to superstitious stuff like breaking mirrors (“seven years of bad luck”) and walking under ladders.

It’s Stevie Wonder at the height of his powers too. Who in their right mind isn’t going to enjoy it?!

‘I’m in Love with a Monster’ – Fifth Harmony

Ready for something slightly more contemporary?

This one is from the movie Hotel Transylvania 2 (where incidentally we got the name for this website from — to ‘zing’ is the term for when monsters call in love).

‘I’m in Love with a Monster’ is a funk-influenced pop song with tons of attitude. It’s a bit of throwback to the musical style of The Supremes too. No bad thing!

Need some hard rock for this Halloween bash? Then ‘Highway to Hell’ from Aussie rockers AC/DC should serve you well.

‘Highway to Hell’ was the nickname for an intersection of an Australian highway (Canning highway, to be precise) that was notorious for accidents.

Any decent party needs some hip hop in the mix. So here’s one to play from the lyrically dexterous Eminem (with a little help from Rihanna).

This song is all about making friends with the monster under your bed and getting along with the voices in your head. This qualifies it straight away for the playlist!

Whenever I write one of these playlists, I always look for opportunities to include a Talking Heads / David Byrne song because they’re so darn good.

I didn’t need to try too hard this time. ‘Psycho Killer’ literally jumped out. While it’s not about ghouls or bogeymen, the subject matter is suitably dark.

Bowie was no stranger to weirdness. In fact, most of his career was based on it. In this song, we hear him running away from scary monsters and super creeps.

“When I looked in her eyes, they were blue but nobody home.” Not one to take home to meet your mother then.

As scary stories go, the 1978 slasher movie Halloween is right up there. So if you really want to make things creepy, play this one on repeat.

Music colleges have tried to identify what makes this theme tune so ridiculously scary. They say its irregular time signature helps to make it unsettling.

I’m not sure about you, but just the first few moments of this get my heart racing!

According to pop mythology, Don Henley dated a woman in the early ’70s who liked to dabble in ‘white witchcraft.’

“I thought it was charming and seductive,” Henley told Rolling Stone magazine.

A few years later, Henley dated one of the most famous ‘white witches’ in pop music, Fleetwood Mac’s Stevie Nicks!

Written by Fleetwood Mac’s Peter Green, it was Santana who went on to make ‘Black Magic Woman’ a massive hit.

Santana made it their own though, adding some tremendous Latin textures. It’s a superb party song. Halloween music doesn’t get much better than this.

If you plan to propose to your partner on Halloween, then this cute little ’60s pop song is for you, as it includes the line “so I’ll propose, on Halloween.”

But on a serious note, have you really thought this through? Is this really the right time to pop the question? Do you think she’ll say yes to a guy looking like Frankenstein? :p

‘Skeleton In The Closet’ – Louis Armstrong

From the 1936 movie Pennies from Heaven. This was Louis Armstrong’s first major screen appearance.

Here, Satchmo talks of an “old deserted mansion on an old forgotten road.” This spooky haunted mansion is where “the better ghosts and goblins always hang out” (you see, there’s even inequality in the afterlife!).

It’s a fun song that hardly anyone will know. Time to bring it out of the closet?

‘This Is Halloween’ – Danny Elfman

‘This Is Halloween’ is from the Tim Burton movie The Nightmare Before Christmas. In the film, the residents of the fictional ‘Halloween Town’ sing it.

The song was covered by the band ‘Marilyn Manson’ in 2006.

Vampires and monsters may be scary. But for some people (especially singer Andre 3000 in this song), falling in love is way more terrifying.

He sings, “my castle may be haunted, but I’m terrified of you.”

Blue Öyster Cult often sung about the supernatural and fantasy lyrics. The song has appeared in many horror movies, including The Frighteners and Scream.

‘I Put a Spell On You’ – Screamin’ Jay Hawkins

Songs about magic are also great for the creepiest night of the year. This one, by the crazy-looking Screamin’ Jay Hawkins, is pretty ‘out there.’

During his performance, Hawkins emerges from a flaming coffin, wielding a skull on a stick called ‘Henry.’ The lyrics are a bit suspect, too (it’s a tale about putting a curse on the girl).

You may be more familiar with the Nina Simone version of this song, which, let’s face it, is much better.

Do you know something else Halloween is big on? Zombies, aka the living dead.

Even your car won’t work. “Your carburetor don’t carb, got a hammer down this.”

It’s way better than many songs here and deals with some pretty weighty topics (inner-city urban decay, violence, and unemployment – hardly the stuff of trick and treating!)

But still, it’s got ‘ghost’ in the title, and the music sort of sounds like a ghost ride at a funfair.

It would help if you had a little punk in your playlist too.

This is from their 1989 album Brain Drain and was penned for the Stephen King movie of the same name.

The music video, set in a graveyard, is a lot of fun and did well on MTV (of course it did, in the ’80s all anyone did was watch music videos and listen to their Sony Walkmans).

Bauhaus bassist wrote this song after binging on vampire movies (as you do). It’s considered one of the main catalysts for starting the gothic (or ‘goth’) subculture.

If you hadn’t figured it out, Bela Lugosi is the actor who played Dracula in early Drac flicks.

‘People are Strange’ – Echo and the Bunnymen

Vampire movies and TV shows had a resurgence in the 80s’ (e.g., Fright Night, Salem’s Lot). The movie The Lost Boys was huge too.

With a young Keifer Sutherland playing the lead bloodsucker, it’s a pretty fun movie with a great soundtrack. In particular, this Echo and the Bunnymen cover of The Doors’ classic.

You wouldn’t necessarily think of this as a scary song, but if you’ve seen the horror flick The Exorcist, then you definitely will.

The movie has the habit of scaring the life out of most people who see it, and this song, by association, brings back all those blood-curdling moments.

No list of scary songs is complete without it!

More Halloween Songs (in case you needed them!)