11 Best Songs from Moana the Movie 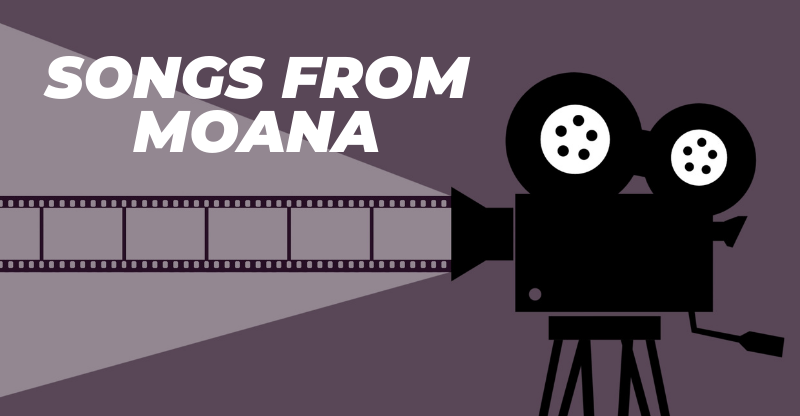 Moana is one of Disney’s most loved modern animated movies among families and audiences of all ages. Released in November 2016, the film teaches important lessons about discovering oneself and embracing one’s unique qualities and personal identity. Celebrate this film and its music by learning about the celebrated songs from Moana.

Tulou Tagaloa’ opens the film before Gramma Tala’s story during the time that the iconic Walt Disney logo is displayed. Its vocals are also heard toward the movie’s end. Its lyrics can be roughly translated into a lovely proclamation about the beauty and light of the world. It also talks about the beginning of a journey, making it a good song to start the movie. The lyrics are part of the score called ‘Voyager Tagaloa.’

This track plays as baby Moana begins to bond with the Ocean after helping a baby turtle stay safe from predatory seagulls. The lyrics are all about a young girl taking on new and exciting responsibilities while remaining full of wonder and youth. In its original form, the song honored 19 female lives lost to a fire at Motufoua Secondary School in Vaitupu, Tuvalu in 2000. It was re-written to fit the movie and its storyline.

Related: see our playlist of songs about the ocean.

Chief Tui encourages Moana to embrace the lifestyle on Motunui and her roots in this song. It is sung while Moana is thinking about exploring the ocean. Other characters also sing throughout the track, including Moana, Sina and the villagers. While it’s discouraging to Moana in the film’s context, it also encourages listeners to be happy with their lives as they are rather than feeling dissatisfied, especially when it comes to things that can’t be controlled.

How Far I’ll Go’ is one of the most celebrated and well-known songs in Moana. It was nominated for a Golden Globe Award as well as an Academy Award—for Best Original Song in both cases. While it didn’t win either award, it did win a Grammy Award for Best Song Written for Visual Media. Moana sings this track while contemplating whether she should follow her own desires or obey her father’s wishes to remain on Motunui.

We Know The Way – Lin-Manuel Miranda and Opetaia Foa’i

This was actually the first song written for use in Moana. It celebrates exploration and voyagers—specifically, the great South Pacific natives that were among the world’s first navigators. It was originally set to open the film during Moana’s birth, but was moved to a later portion of the film, when a flashback to Moana’s ancestors and their voyage to undiscovered land is shown. The song is played once again at the end of the movie.

Dwayne ‘The Rock’ Johnson sings this track as the demigod Maui. It is all about Maui’s accomplishments and serves as a distraction for Moana as Maui attempts to steal her boat and escape exile. It’s another track that is among the film’s most popular. It appears during the movie’s end credits in a cover version performed by Lin-Manuel Miranda and Jordan Fisher. Maui’s arrogance shines through in this humorous track as he assumes everyone is grateful for his deeds.

Tamatoa sings this song in an arrogant manner while bragging about what he perceives to be his best qualities, with special attention paid to his shiny shell. It is a distraction that Moana starts in order to give Maui time to find his fish hook. David Bowie was said to be an inspiration for the song and its theatrical styling. It also serves to mock Moana and the purpose of her journey, adding tension to the film.

Here’s the track that plays during the turning point in Maui’s and Moana’s journey across the Pacific Ocean to Te Fiti. Many things happen while this encouraging song plays, including Maui’s completion of Moana’s wayfinder training. It ends as the two reach Te Fiti with a deeper understanding of and appreciation for one another. The lyrics are in Samoan and translate into a song about dancing and swaying as a pair. It could be interpreted as a love song in a broader sense.

Moana and Gramma Tala’s spirit sing this song as a duet just as Moana is losing hope due to Maui’s abandonment. Moana reaches a key turning point as she realizes her honorable ancestry will allow her to change the world in miraculous ways. She then retrieves the Heart of Te Fiti from the Pacific Ocean and starts off on her quest once again. The lyrics are all about Moana and the pride her family and ancestors feel for her.

Moana learns the truth about Te Kā near the end of the movie, leading to her singing this track. Moana learns more about herself and her family during the course of the song. Backing lyrics are sung by offscreen vocal talent. The tune ends when Te Kā turns peacefully into Te Fiti after disintegrating. The song sounds hopeful, sad and inspiring all in one and could be considered one of the most moving tracks in the film.

This finale version of the song that appeared earlier in the film celebrates the excitement and honor that comes with exploration and the South Pacific natives of Moana’s time, who were the first explorers known to history. The track features lyrics in Samoan and Tokelauan. It’s all about finding a new and beautiful land during a voyage across the water and making that unknown territory one’s new home. The original version of this track was the first piece written for the film.