30 Quality Songs That Start with the Letter Q 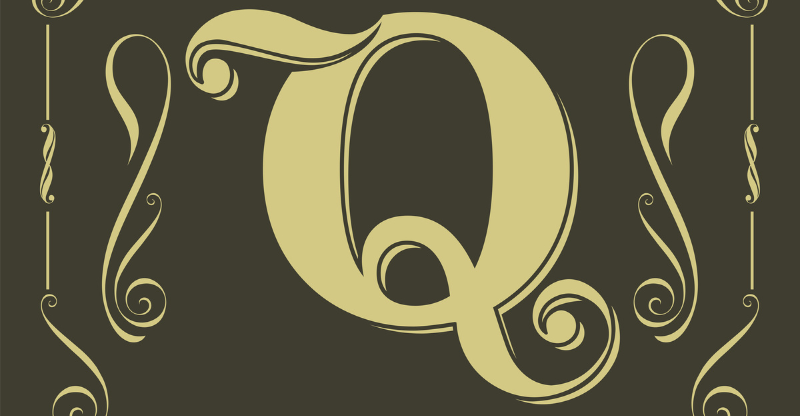 The letter Q is a somewhat unusual one. Even so, quite a few notable songs use it at the beginning of their titles.

This song explores David Bowie’s struggles with the unknown. He feels anguish over unanswerable questions about life. He eventually comes to the rather depressing conclusion that only death will bring an end to the questions—either through answers or release from the questions.

Que Sera, Sera (Whatever Will Be Will Be) – Doris Day and Frank De Vol

The listener sees different stages of a woman’s life in this track. At each stage, she learns the importance of not worrying about the future, as we can’t know what will happen in our lives. At first, her mother teaches her this; later, her romantic partner does. In the last verse, she teaches her children the same lesson.

Related: Ready for tomorrow? Here are some songs about hope for the future.

‘Queen of Denmark’ became the title track of John Grant’s debut solo album. The song was inspired by Grant’s travels to Denmark when he fell in love with the country. The song also explores the singer’s inner self and love-hate relationship with himself.

Related: Hear about more places on our list of songs about different countries.

This is a track about growing up—more specifically, what it was like for Beck growing up in an area of Los Angeles where most residents spoke Spanish and most radio stations and billboards were in Spanish. The title roughly translates to ‘What’s Up, Blond Boy?’ The song features in a 2005 episode of the television series Entourage.

This track refers to the mountain Corcovado, which is in Rio de Janeiro, Brazil. Corcovado means “The Hunchback” in Portuguese. The narrator seems happy to be near Corcovado with a romantic partner and says that life has meaning now that they are in a relationship are content.

Related: Keep your voice down and enjoy the best songs about being quiet.

Bob Dylan criticizes the life of a fictional queen in this track. There are many speculations about who the “Jane” of the song was inspired by. Some listeners believe the song is actually about Joan Baez; Dylan and Baez were breaking up around the time when the song was released. However, Dylan also said that the queen in the song is a man.

Related: This song features on our playlist of songs about kings and queens.

Pearl Jam paints a picture of an apocalyptic future where humanity is marooned on Mars in ‘Quick Escape.’ The song blames former U.S. president Donald Trump for this fictional Earth’s destruction. The track uses science fiction to make a political point. The strong bass line helps the song stand out.

Related: Blast off with these songs about outer space.

Juice Newton falls for an unreliable lover in this cover of the Dave Edmunds track. While Newton knows it’s a bad idea to be with this person, the relationship proves irresistible. Out of all its covers, Newton’s version of ‘Queen of Hearts’ became the most popular; it was an international hit after its release.

This song is about a boy whose father sees him as being “the queerest of the queer,” meaning he is a seemingly odd person and wants to make him more normal. Eventually, the boy learns that his father has many of the same issues; he probably wants to prevent his son from having the same hard life.

‘Quiet Town’ is about a true accident on train tracks that led to the death of a 17-year-old couple. Brandon Flowers knew the couple in his hometown and was greatly affected by their death. On a larger level, it is about the tragedies that befell the hard working residents of the town.

Related: If you’re going through a tough time, listen to the best tragedy music.

David Bowie pays tribute to the Velvet Underground in this track, which purposely imitates their sound. The song also uses the guitar riff from ‘Three Steps to Heaven’ by Eddie Cochran. The album Hunky Dory contained several tributes to other artists; this was one of them.

Here’s a tune that tackles spirituality by borrowing from several major religions. The lyrics mirror Billy Corgan’s own eclectic spiritual beliefs, drawing heavily on Buddhism and Catholicism. The album the song appears on, Oceania, is structured around tarot card symbolism.

Jessie J has said that she wrote this song to remind every female listener of her worth. The song is supposed to remind women of all shapes, sizes, and looks that they are beautiful and worthy. Jessie J also said that the song should be thought of as a mantra for self-love; it seems the song helped her feel better about herself, as well.

Related: Feel confident with these believe in yourself songs.

This is based on the 1981 art film of the same name, which is about cavemen looking for fire. The song is somewhat humorous and tells a similar story. This is widely considered one of Iron Maiden’s worst songs, as it was unliked like the film it was named after.

Related: Listen to more hot songs with lyrics about fire.

This song features Erykah Badu. Its lyrics were drawn from private conversations between Badu and Janelle Monáe, who are said to have a sisterly bond. The track was the first single released from Monáe’s second album and was available only on her website.

Related: Hype yourself up with these independent woman songs.

Demi Lovato sings of a relationship that seems to be at an awkward standstill in this track. Both parties are being silent, which Lovato wants to get past: “Why can’t we break this silence finally? Make it all go away. It’s too quiet in here.”

Questions for the Angels – Paul Simon

In this piece, Paul Simon wonders if zebras would care if humanity disappeared. This is the main question, though others are included and are considered questions that only angels could answer. The song represents part of a larger theme of questioning life on the album So Beautiful or So What.

This is an upbeat piece from Bastille. It’s about losing oneself in the middle of the night in a city and having adventures with others, either romantic partners or friends. The track’s sound is meant to mirror the lyrics’ uplifting vibes. It is inspired by Dan Smith’s personal experiences.

Related: Pack your bags and enjoy these songs about going on an adventure.

Loren Gray sings an empowering anthem here. The song is supposed to remind listeners to consider their own worth in all of life’s relationships, including one’s self-relationship. It highlights Gray’s desire to inspire her listeners to pursue their dreams as she has.

This song is about dancing to music in the middle of the night—specifically, Daddy G.’s saxophone music. The song is energetic, roughly produced, and dance-focused, in contrast to the smoother production styles that were popular when the song was released in the early 1960s. The track is based on the instrumental piece ‘A Night with Daddy G.’

Related: Night owls are sure to love these songs with night in them.

As the title suggests, this piece tackles James Arthur’s feelings of homesickness as a touring musician who spends months on the road. He specifically wants to go home to someone special as well as other people who are important to him; he mentions the things that make their homes special to these people, as well.

Camila Cabello is made nervous by a love interest in this track. Her passion for him makes her lose her senses to an extent. The song also explores a moment of passion between the two. It’s likely that Cabello is talking about her relationship with her ex Shawn Mendes since the two did not split up until after the song was written.

After a brush with the law, Morray was set to give up his rapping career. Then, a manager discovered this song on YouTube and got in touch with him. The autobiographical track describes Morray’s rough upbringing in Fayetteville, comparing the conditions to quicksand.

The protagonist here is trying to get used to single life after a breakup. He’s surprised by the split, as he thought the coupling would last longer. He is okay with being single; he is just bored without his lover. This track was released after being shelved from a previous album.

Carrie Underwood is used to guys who run away on this track. However, her new partner helps her believe that a relationship could last. The song uses traditional country instruments such as steel drums and mandolin music even though its producers are well-known for modern pop tracks.

Queen of the Highway – The Doors

This is about Jim Morrison’s relationship with Pamela Courson, who would later become his wife and was with him on the day he died in 1971. The lyrics paint her as a “good girl.” Robby Krieger, The Doors’ guitarist, co-wrote the track with Morrison.

This two-minute track was released in 2020 during the earlier stages of the COVID-19 pandemic. It explores the effects of social distancing and the pandemic on everyone, highlighting the wide range of emotions people felt during those early days—including boredom and hysteria.

The narrator here seems to be speaking about a romantic partner who is refreshingly positive and innocent in her worldview. He doesn’t know what to do about their relationship, as the two are very different, and he has problems with her mother. The song was released in December 1989—just in time for a new year and decade.

Lifehouse paints the traditional fictional character Quasimodo as a young outcast in this track. Some people come along and try to mold him into who they want him to be. He finally learns that being himself is the only way he can truly be free and, therefore, happy.

Related: Appreciate yourself with these songs about self discovery.

This was one of Max Martin’s first hits as a songwriter and was the only song that the Backstreet Boys had that was close to being a chart-topping hit. In the song, a male protagonist asks his romantic partner to stop playing games with him and being untrue behind his back.