30 Best Songs With ‘Girl’ in The Title 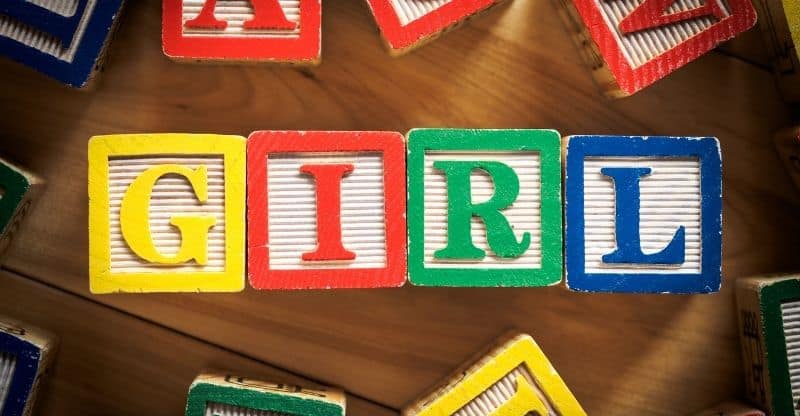 We went on a mission to find the best songs with girl in the title.

It turns out there are many, many great songs, from The Beatles to The Beastie Boys to Beyoncé.

If we’re looking for songs with ‘girl’ in the title, we have to start with this one by The Beatles. It’s simply called ‘Girl!.

Is there a more memorable opener than “Is there anybody going to listen to my story, all about the girl who came to stay”?

It’s one of the best songs by the fab four.

From one classic to the next. ‘China Girl’ appears on Bowie’s celebrated 80s LP, Lets Dance, and is one of those songs you can’t get tired of listening to (I can’t, anyway :–)).

It was Iggy Pop who first recorded it (and co-wrote it), but it was Bowie who made it a hit. Stevie Ray Vaughan plays lead guitar on it, which seals the deal.

One of the biggest pop songs of the 80s and a favorite karaoke song for girls, this song was an anthem for women’s lib.

Related: check out our playlist of songs about fashion.

From Dylan’s return to form ’70s album Blood on the Tracks, this is a breakup song and one (if not the) most emotional of his entire canon.

It deals with the aftermath of someone walking out on you, “with a pain that stops and starts / like a corkscrew to my heart / ever since we’ve been apart.”

‘The Girl Is Mine’ – Michael Jackson feat. Paul McCartney

This upbeat song about jealousy appeared on Jackson’s hit album Thriller, alongside ‘Beat It’ and ‘Billie Jean.’

A song about severing a relationship with a girl (lead singer Anthony Kiedis who broke off with his girlfriend), “the twilight of love had arrived,” he pronounces.

The song is also about his dad’s lack of commitment towards women, which Kiedis discusses in his autobiography.

The story goes that the writers of this song (two Brazilian composers, Antonio Carlos Jobim and Vinicius de Moraes) were in awe of a young Brazilian girl (called Helo Pinheiro) who walked “like a samba” past the bar where they resided.

Ipanema is a district in Rio de Janeiro that shot to fame after this song.

Adam “Ad-Rock” Horovitz’s rap features some outrageous misogyny (“Girls, to do the dishes / Girls, to clean up my room”) that is obviously satire.

The Beasties used satire a lot, like in their song “(You Gotta) Fight for Your Right (to Party),” which was a parody on frat boy parties.

We include it in our songs about fighting if you want to read more.

A lesser-known Stones song from their Beggars Banquet LP, ‘Factory Girl’ is an acoustic blues number about a disheveled girl who’s a “sight for sore eyes.”

The theory goes that the song is actually about Edie Sedgwick, a 60’s underground film star and socialite who appeared in several Andy Warhol movies he made in his studio, called ‘The Factory.’ A movie was made about her life in 2006.

Here’s an upbeat love song from one of the best modern pop outfits, Maroon 5.

The brilliant video took a few months to make as they kept inviting more women to join in, including Ellen DeGeneres and Jennifer Lopez. The final woman in the sequence is Adam Levine’s wife, holding his baby.

‘Some Girls Are Bigger Than Others’ – The Smiths

One of The Smiths’ more peculiar songs (and there are a few to choose from), the song’s frivolous lyrics talk about the different sizes and shapes of females and their mothers! Morrissey found the topic interesting (only Mozzer could have gotten away with it as you know it’s not sexual.)

The lyrics even surprised co-writer Johnny Marr when Morrissey presented them to him.

‘My Girl’ – The Temptations

Written and produced by Smokey Robinson and Ronald White (both members of The Miracles at the time), it became a massive hit for The Temptations.

The opening bass line is one of the most recognizable ever.

This waiting song from British-American rock band Foreigner is a love ballad about finding that special someone.

This gut-wrenching performance was inspired by a mysterious woman who appeared in the studio when singer Lou Gramm was performing the song. But, unfortunately, he never tracked her down.

‘I Kissed a Girl’ – Katy Perry

A song about, in Perry’s words, “exploration and female bonding.”

It garnered a fair amount of criticism on release for its subject matter of bisexual experimentation but won her as many fans for supporting the LGBTQ community.

Writer Damon Albarn got the idea for this 90’s hit while on holiday in Magaluf (on the Mediterranean island of Majorca.)

Not a lot of people spot the line in German “du bist sehr schön,” which means “you are very pretty.”

This song works on a couple of levels. First, it’s about the end of innocence. This American girl has been brought up on “promises” but now realizes “there was a little more to life somewhere else.”

Secondly, there’s a reference to a piece of Floridian folklore (Petty grew up in Florida). A student under the influence of hallucinogens was believed to have jumped to her death from her dorm room window (believing she could fly) in Beatty Towers.

These lyrics will make sense now: “she stood alone on her balcony, she could hear the cars roll by, out on 441.” Beatty Towers is on State Road 441.

Related: this song appears on our playlist of best road trip songs.

An almost compulsory song at a wedding if the bride has brown eyes. Weddings aside, Van Morrison’s ‘Brown Eyed Girl’ is good but far from his best.

Even he admits in a Time Magazine interview that it’s “a throwaway song.”

This folky pop song about an Irish girl from Galway nearly didn’t make it onto Sheeran’s hit album Divide, as the record label thought folk didn’t sell. How wrong they were.

This is one of his most loved songs, especially in Ireland (surprise, surprise), where it topped the charts.

In this song about wealth by Madonna, the queen of pop is portrayed as a manipulative gold digger. But, of course, for any student of Madonna, you’ll know that couldn’t be further from the truth.

“I feel lucky to be able to afford a Frida Kahlo [painting],” she said in a Rolling Stone interview, but “these things are not mandatory for my happiness.”

‘My Best Friend’s Girl’ – The Cars

Here, his best friend’s girl used to be his girl, till she ran away with his mate. Now all he can do is lament his loss and remember how good she looked “dancing ‘neath the starry sky.”

It’s one of the best jealousy songs of the ’70s.

Rubberband Girl sounds like a pop song, but it’s pretty deep (like most of her material, which is why she’s so good).

The message of this song is we live too rigidly, to our detriment. She ponders, “if I could learn to give like a rubberband”. She has a point. Wouldn’t the world be a better place?

Of course, not every girl is an angel. Here’s a song about regretting being with a girl. “I thought you’d change,” he sings, but “then you do me wrong.”

Another great Black Key’s track is ‘Tighten Up,’ which we feature in our songs about whistling playlist.

The lyric “to a dive bar in a West End town” referred to an actual bar the Pet Shops boys used to frequent.

Beyoncé doesn’t mince her words: girls run the world. Girls are “smart enough to make these millions,” “strong enough to bare the children,” and “then get back to business.”

It’s true; speaking as a guy, we’re pretty lame a lot of the time.

With its gloriously overdriven guitars and handclaps, ‘Cinnamon Girl’ was easily one of Neil Young’s career highlights in the early years.

You have to listen to the studio version (included above) with the late, great Danny Whitten on backing vocals (singing the high bits). It’s far superior to later live versions (in my opinion).

We include this track on our list of food songs (yeah yeah, I know cinnamon is a spice!)

I have to admit this isn’t queen at their best. But despite the ridiculous lyrics, the song is still a lot of fun. With that pair of lungs on the mic, they could be singing about porridge, and it would still sound great!

Queen were no stranger to bizarre song choices. Check out their incredibly dour ‘I’m in Love with My Car,’ which we include on our list of car songs.

The Beach Boys made it easy for their audience – they mainly sang about surf, cars, and girls.

This track is one of their best about the girls from the West Coast. According to the band, they are the “cutest girls in the world.”

‘The Most Beautiful Girl in the World’ – Prince

Prince was a purveyor of quality songs, consistently making great music in his residence at Paisley Park. ‘The Most Beautiful Girl in the World’ is a superb rock ballad that floored the charts on its release.

Prince sings, “it’s plain to see you’re the reason that God made a girl.” That’s some accolade!

For more from the genius Prince, listen to his brilliant ‘Money Don’t Matter 2 Night’, one of the best greed songs you’ll ever hear.

Related: this track also appears on our beautiful women playlist.

An ’80s classic here. The premise here is a working-class, regular guy (Billy Joel) tries to convince a glamourous, upper-class woman that this “back street guy” is the one for her. “She’s got a choice,” he reminds her.

The irony is that Billy Joel was anything but a working-class guy at the time of penning this tune. In fact, he’d had a string of relationships with supermodels (Elle Macpherson being one of them) and was himself living in a “white bread world”!

‘Girls on My Mind’ – David Byrne

Any chance to include a David Byrne track, and I’ll take it!

It’s a song about a guy who can’t stop thinking about girls. It possibly has a more profound message about how testosterone overrides the male’s powers of reason. Or it might just be a bit of David Byrne silliness. Either works 🙂

More songs with ‘Girl’ in the Title (if you needed more!)