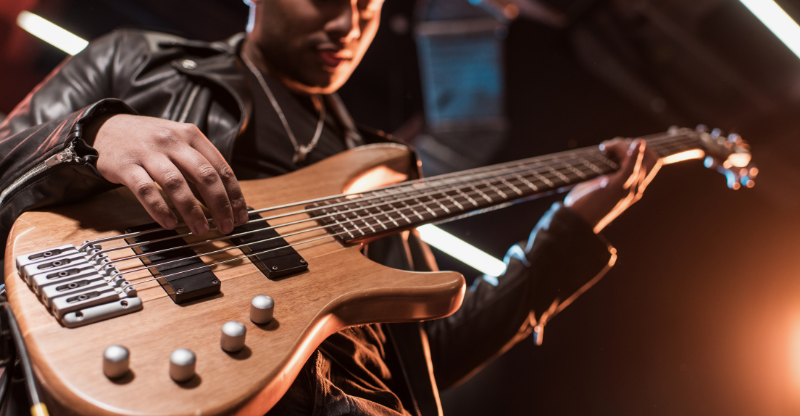 If you like to make your car rattle and the speakers thump, this is the playlist for you! This playlist is full of songs with good bass that you’re sure to love, and of course, the rest of the music is good, too.

So, turn on your bass booster, grab your headphones, and have a good time with some of the best bass heavy songs ever!

‘Hysteria’ is about a guy obsessed with a woman he can’t have. He desperately wants to be with her, and it’s driving him mad! Muse released this song in 2003 and charted high in several countries, and made it to the Top 10 in the US and UK.

Another One Bites the Dust – Queen

Probably one of the most famous bass lines, ‘Another One Bites The Dust’ will have you dancing as this one thumps your speakers. You probably “sing along” to the bass with some “bum bums,” right? This song made it to number 1 in the US and number 7 in the UK. The song is about standing strong despite hardships, making it an excellent song for building confidence.

Come Together – The Beatles

This song was initially written to be used for Timothy Leary’s political campaign in 1969 when he ran for governor of California. He asked John Lennon to write a song for him. ‘Come Together’ includes the title phrase throughout the song to encourage the people to come together. Leary eventually decided not to use the song, so The Beatles added some nonsense phrases and turned it into a hit that made number 1 in the UK.

If you play the bass guitar, you’ll know all about this one. This classic from the King of Pop is all about an obsessive woman who says the singer is her child’s father. The source of the song is a little murky. Some say the song was based on a woman who did this to Michael Jackson, while others say it was inspired by women who did it to Michael’s siblings.

Come as You Are – Nirvana

‘Come As You Are’ is about living up to expectations. Many of the lyrics are contradictions of each other, which makes it confusing. But when trying to conform to society’s expectations, you’ll soon find out that everyone wants you to be something different! This song didn’t make it to the Top 10 in the US, but it did in the UK.

For Whom the Bell Tolls – Metallica

‘For Whom The Bell Tolls’ is a commentary about war and how useless it is. The singer questions why they do things like give their life up for a hill. The song is based on an Ernest Hemingway novel about the Spanish Civil War with the same title published in 1940. The first time the phrase “for whom the bell tolls” is known to be used was in a 1623 poem by John Donne.

Life is hard, so people often do what they can to feel good to avoid feeling bad. Reasonable, right? ‘Feel Good Inc’ is about engaging in mostly bad habits to get relief from bad days. However, the chorus talks about windmills to metaphorically say that everyone should stop looking to please themselves and work to make life pleasant for others around them. This peace-promoting song charted at number 2 in the UK and 14 in the US.

‘Papercut’ can be interpreted in several different ways, but it’s most commonly understood to be about being paranoid about receiving criticism. The criticism could come from others or even from yourself. The message in the song is that worrying about what others think of you – or being too harsh on yourself – can make you feel like you’re going crazy!

Related: see songs about accepting who you are.

So What – Miles Davis

This instrumental jazz song was the first song on Miles Davis’s 1959 album Kind of Blue. The song was recorded in just one take by a new band that had very little instruction to work with. They obviously understood the instructions given since this album is often regarded as one of the best albums of all time!

This fast-paced two-minute instrumental song is fun to listen to since it’s busy and exciting. Wear some good-quality headphones, turn up the bass, turn on the spacial sound, and you’ll be in for a ride! If this song sounds familiar to you, it may be because of the sped-up sample from ‘Ashley’s Roachclip’ by The Soul Searchers, released in 1974.

Burning Down the House – Talking Heads

A crowd chanting “burn down the house” at Madison Square Garden inspired the title of this song. The drummer and bass player (who are married) of Talking Heads came up with a rhythm and presented it to the rest of the band. The lyrics were chosen based on what worked well with the rhythm, so most of the lyrics seem like nonsense. Not all songs have to make sense to be a hit, though! This one made it number 9 in the US.

This song is about a man in search of the perfect woman. The song has a couple of Lord of the Rings references, which is fitting since the “main character” of the song is on a journey. The Mordor reference is about an evil place, and Gollum might be referring to a liar. Led Zeppelin never performed this entire song live, even though it was pretty popular.

Here’s one of the best bass songs ever made. Stevie Nicks wrote this song while she was divorcing her husband, and some of the lyrics were direct hits toward him. The song is symbolic and compares love and relationships to nature. It’s the only Fleetwood Mac song that made it to number 1 in the US, despite many of their songs being popular in America.

Around the World – Daft Punk

The heavy bass carries you through this mesmerizing song from Daft Punk. With only five instruments and repetitive beats, this song is often regarded as one of Daft Punk’s greatest hits ‘Around the World.’ The music video has dancers that represent each instrument. The tall guys are the bass, the swimmers are the synth, the mummies are the drums, the skeletons are the second guitar, and the robots are (fittingly) the vocals.

Modern music will leave you a bit desensitized to titles like these, but back in 1970, when this song was released, James Brown made a bold move when he chose this title. It was apparently well-received because it became the first song with a spicy title like that to make it to the Hot 100 and be played on radio stations! The song isn’t what you think it is; it’s about staying popular in the spotlight and not losing fame.

This song was released in 1970 and made it to number 1 in the US. The song deals with many heavy topics regarding racial inequality, which was still very much a hot topic in the States since the Civil Rights Movement had just “ended” in 1968. The misspelling of the chorus is intentional and came to be because the band felt like people often missed the point of the lyrics because of the music.

If you’re looking for something that will vibrate your speakers, look no further than ‘Boom Boom Pow.’ The title refers to the bass in the song, so it should surely make your speakers go boom! The song charted at number 1 in both the UK and the US and held the record of the most digital downloads in the first week for three years.

The singer wants to end the relationship, but neither he nor his partner is willing to end it. Many assume that one partner is much older than the other because of the title. However, you may see this song talking about being old enough to know what you want and get it. Both of these partners are presumably old enough to make their own decisions, but neither can decide to end the relationship.

Give It Away – Red Hot Chili Peppers

‘Give It Away’ is essentially a song about creating good karma. Lead singer Anthony Kiedis was given a jacket by a German singer who said that giving things to people creates good energy, which inspired him to write this song. Some of the lyrics appear random, but they’re primarily about good things and good people.

This is a great song for anyone who needs some encouragement after dealing with bullies or anyone else trying to bring you down. This song made it to the Top 10 in both the US and the UK. Sia wrote the song for Katy Perry, who turned it down. David Guetta liked the demo Sia provided and talked her into singing the song.

This song is about a man who’s so blinded by love that he doesn’t realize the girl he’s with doesn’t treat him right. She lies and doesn’t love him the way he loves her, so he’s better off with someone else, but he doesn’t think so. The song charted high in the UK, Australia, Scotland, and several other countries.

Sometimes you may feel like you’re stuck in a loop or living life on autopilot; you’re bored, lack motivation, and can’t create anything. ‘Longview’ is all about these feelings of boredom and uselessness we all experience time to time. This song wasn’t quite a hit, but it did chart at number 30 in the UK.

No list of bass heavy songs is complete without Seven Nation Army. Lead singer Jack White created a story of a guy who returned to his hometown only to find out that everybody had been gossiping about him, causing him to leave once again. Jack used the story to discuss how his growing fame wasn’t without people talking about him behind his back. The title is unrelated; when he was a child, he used to think the Salvation Army was the “Seven Nation Army.”

This is a personal song for The Weeknd since it deals with two former lovers he was pretty close with. Although, he preferred one over the other since he claims to have wasted time with the other while he was apart from the first girl. This song made it to the top 30 in both the US and the UK.

Another song with a strong bass line, ‘Town Called Malice’ is about unemployment in suburban areas. Lead singer Paul Weller wrote this song specifically about his hometown in Woking, England. The song was a number 1 hit in the UK when it came out in 1982, probably due to the rising unemployment rates the country experienced at the time.