14 Great Songs with Hello in the Title 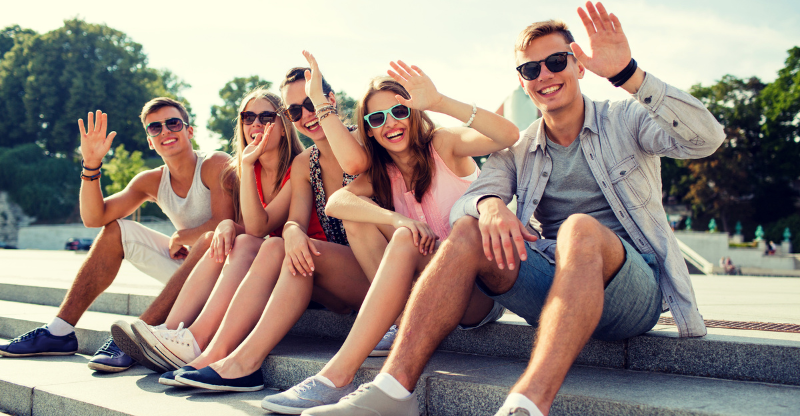 Check out these conversational tracks by some of your favorite classic artists. You’ll find the classic hits from Lionel Richie, Adele, and many other great hello songs. Stay awhile and say hi to these great tunes!

Read on to see how these songs with hello in the title came to be.

A jumping jazzy number with sparse lyrics and lively saxophone solos, Sherman Williams Orchestra’s ‘Hello’ was a popular dance number in the 1940s. Sax player Sherman Williams formed his own swing band in the 1940s and went on to tour extensively, with shows centered around his hometown, the music city capital of Nashville, Tennessee.

Hello, I Love You – The Doors

While walking on the beach in 1965, frontman Jim Morrison noticed a bathing beauty he couldn’t resist. In his head, he came up with the pickup line, “Hello, I love you. Won’t you tell me your name?” He wrote the rest of the tune honoring his beachside love interest that night when he returned to his hotel room. Due to its popularity, many Doors fans considered the single a “sellout” attempt for the band.

If You See Her, Say Hello – Bob Dylan

“Whatever makes her happy, I won’t stand in the way.” Folk songwriter Bob Dylan is no stranger to heartache, and his 1975 album Blood On The Tracks features several tunes about breakups. When it comes to his song ‘If You See Her, Say Hello,’ we find the lonely singer reminiscing about a lover he loses. In this case, there’s no animosity. He’s only wishing her the best as she moves on.

Related: See more of the best songs about hating your ex.

Hello in There – John Prine

Written in 1971 before country star John Prine officially entered his golden years, ‘Hello in There’ was written with the older crowd in mind. He became inspired to write the tune after listening to John Lennon’s ‘Across the Universe’ and being intrigued by Lennon’s heavy use of reverb with his voice. He began writing the song by translating the effect and envisioning himself yelling into a “hollow log” while saying, “Hello in there.”

Related: Hear ‘Across the Universe’ on our list of songs about the universe.

One of David Bowie’s recordings later in his career, ‘Hallo Spaceboy’ features guest vocals from The Pet Shop Boys. The single has been likened to music released by rock band Nine Inch Nails, and Bowie himself has mentioned he equates the tune to a very metal The Doors sound. It was a huge hit across Europe, especially in France.

Related: Blast off to our playlist of space themed songs.

Musicians Lou Reed and John Cale were heavily influenced by one of their closest confidantes, the pop art inventor Andy Warhol. After Warhol’s passing in the mid-80s, the duo linked up at his memorial and decided to record a concept album, Songs for Drella, as a way of saying goodbye. ‘Hello It’s Me’ is the song on the album that represents the musical pairs’ official farewell to their mentor.

Ricky Nelson’s ‘Hello Mary Lou’ was his most popular song, capturing the romantic innocence of the early 1960s before the counter-culture revolution took place. He sings about falling in love at first sight when he lays eyes on “sweet Mary Lou.” He proclaims “goodbye heart” as she immediately steals it away.

Related: Take another look at the best songs about love at first sight.

Paul McCartney’s friend Alistair Taylor was visiting when The Beatles songwriter told Taylor to begin shouting out the opposite of whatever he said as he played the harmonica. This friendly visit was how ‘Hello, Goodbye’ was born. Bandmate John Lennon was not a fan of the tune. His ‘I Am the Walrus’ was beaten out by McCartney’s song for placement on the A-side of their record.

Related: Be sure to say hello to these songs about goodbye.

In the 1970s, country music was the genre you visited if you needed a metaphorical shoulder to cry on while going through heartbreak. Conway Twitty’s ’70s ballad ‘Hello Darlin” is an emotional story with the singer coming across as “the one that got away” and dealing with seeing her with a new flame.

One of the most popular tunes to parody, Adele’s ‘Hello’ is a pensive, moody tale featuring a heartbroken protagonist trying to find closure as she moves on from a rocky relationship. She wrote it while dealing with feelings of guilt from leaving her child to go to work and ending a long-term romantic relationship.

Related: This song features on our playlist of songs about forgiveness.

Related: Start your Friday night with the best songs about Friday.

When Eminem first reached national fame in the ’90s, fans were introduced to his alter ego, Slim Shady. However, as Eminem grew as an artist, he put his alter ego on the back burner for a little while. With his track ‘Hello,’ he reminds listeners who he truly is and that Slim Shady isn’t dead. He would also record his concept album, Relapse, and delve further into revisiting Slim Shady with that project.

“And when there’s nothing, nothing left to lose. You leave it all to fade to blue.” The Cars’ ‘Hello Again’ comes off as a simple pop song complimented with airy synthesizer melodies. However, when you take a look at the lyrics, a layered story is painted. The tune describes in detail someone’s varied failed attempts at trying to reach happiness.

“Hello. Is it me you’re looking for?” Lionel Richie’s second single off his second solo album after parting ways with his group The Commodores scored him a Grammy award. Appearing on his album Can’t Slow Down, he wrote ‘Hello’ about when he was young and too shy to talk to beautiful women he would meet. Can’t Slow Down is the best-selling album in the Motown genre’s history.

Related: Here are some more songs about not being loved back.

More songs with hello in the title: