16 Songs with Trumpets That You’re Sure to Love 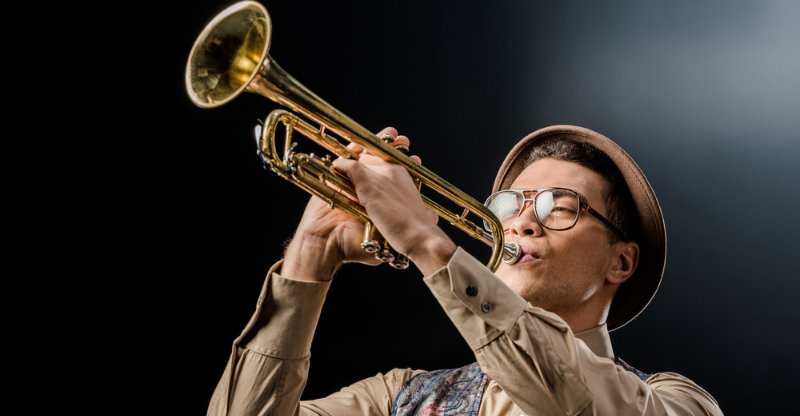 If you love trumpets, chances are you’d like to learn about some fantastic songs that feature memorable trumpet instrumentals. You’ve come to the right place!

Many famous songs feature these fantastic brass instruments in various creative ways. Keep reading to learn about the best songs with trumpets for your next playlist.

Zach Condon wrote this track while living in France. It seems to talk about the good times and bad times in a romantic relationship and the interrelating feelings between both. Beirut’s 2006 album Gulag Orkestar contained no singles, but this song was the only one with an official music video to accompany it.

Jason Derulo compares his feelings about his lover’s physical appearance to various musicians’ music and instruments in this trumpet-focused track. It was co-written with frequent hitmaker Jon Bellion and marked Derulo’s music video directorial debut. It also charted high in Australia for one week following its release.

This song’s title ties in with the end of the song, where part of the British National Anthem plays. The lyrics are quite simple and talk about a collective fear that refuses to leave a large group of people: “Everyone has got the fear. It’s holding on.” The music of Charles Mingus inspired the horn section, which was played by eight musicians from the St. John’s Orchestra.

This was written about the dark emotions and rough life of South African photographer Kevin Carter, who took his life after winning the Pulitzer Prize. The narrator says of Carter, “You wasted your life in black and white.” The song highlights how rough the life of a journalist or photojournalist can be when faced with the rougher side of life as part of one’s career.

Muse tells a combined story of the Four Horsemen of the Apocalypse and Mars with this track; Cydonia refers to a part of Mars where some people believe there was once life. The lyrics were inspired by corrupt leaders in politics and the music of the early 1960s band The Tornados.

Related: Start this playlist with the best songs about the world ending.

This track seems to be about the frustrations of life as they relate to our desires and the problems in the world. There is also a religious element at play as the narrator questions the creation and existence of life and concepts on Earth. This narrator also thinks people need to stop blaming each other for problems and find solutions.

Here’s a very human song about struggling to find meaning in life. The narrator looks for things to add meaning to his life—such as religion—that never end up filling the void. He also struggles to deal with the darkness and injustice in the world and hopes for something better and bigger out of life.

Wake Up Boo! – The Boo Radleys

The protagonist compares his happiness and optimism to his partner’s somewhat overly pessimistic outlook. He encourages her to see the goodness in life and realize all of the wonderful things they could experience together as she seems to blame him for bad things. This was the lead single for The Boo Radleys’ album Wake Up!

Related: Put a smile on your face with the best songs about being happy.

This song got its beginnings while it was being written to the key of Supergrass’s tour bus engine; its title was ‘Susan’ at that time. It’s possible that the song was based off of band drummer Danny Goffey’s brush with tabloids while dating girlfriend Pearl Lowe. The lyrics are about being in the news whether you are quiet at home or out and about.

The term “tubthumping” refers to political candidates on the campaign trail, making it a typical song for a band committed to anti-government themes in music. It also provides a simple message about trying again after getting knocked down, no matter how many times you face disappointment. This was Chumbawamba’s only Top 40 hit song in the United States.

All You Need is Love – The Beatles

This Beatles classic was written specifically to have as much universal appeal as possible. It’s a simple track about the importance of love that reflected the feelings of young people in the late 1960s. The one-note chorus, orchestral endnotes, and atypical tempo make the song unique to its genre.

Related: Find this song on our list of peace songs.

You Can Call Me Al – Paul Simon

Here, Paul Simon presents a narrator who is a vain and self-absorbed man. As the song progresses, he starts thinking more deeply and becomes more aware of the world around him. The names “Al” and “Betty” in the song came from names that Simon and his wife were called after a misunderstanding.

Related: Here are some songs about selfishness.

‘Cheerleader’ was originally meant to be an interlude piece on OMI’s album Me 4 U. The protagonist here celebrates the woman he loves, saying that she is his “cheerleader” who is always there for him and believes in him as a cheerleader would. He will remain faithful to her because he doesn’t want to lose someone like her.

This is a cover of ‘Cantaloupe Island’ by Herbie Hancock. It’s all about feeling and enjoying the grooves and vibes of good jazz music. The spoken opening lines were pulled from Pee Wee Marquette’s announcement on the album A Night at Birdland Vol. 1 from 1954.

Some people believe this song is about a car race, while others think it has romantic undertones. In any case, there seems to be a male character here who is involved in a race—either real or metaphorical—and a woman who is now lonely and has been hurt by this man.

Stevie Wonder wrote this song to show appreciation for the musicians who greatly influenced their audiences, including Duke Ellington, whom the song is named after and who passed away two years before the song’s release. Other artists mentioned include Ella Fitzgerald and Count Basie, among others.