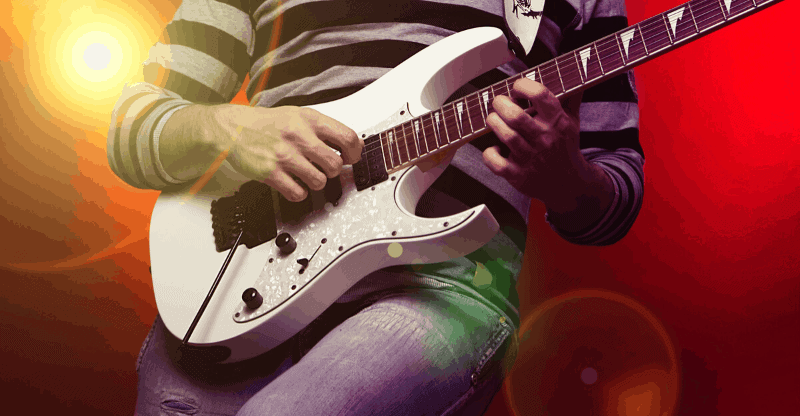 You’ve heard shred and heavy metal guitarists doing that super-fast thing, where they move their pick across all the strings in what seems like a sweeping motion, while at the same time moving their fretting fingers at lightning speed.

It sounds kind of like a chord, but with all the notes separated.

This technique, made popular in the ’80s by the likes of Yngnie Malmsteen, Jason Becker, and Marty Friedman, is called ‘sweep picking’.

In this article, we’ll look at what sweep picking is, how to do it, and show you 8 sweep picking exercises that will take you from sweeping novice to a Malmsteen shredding maestro.

The technique involves making a ‘sweeping’ movement with your pick, whilst your fretting hand plays consecutive notes, one by one. It’s a pretty advanced picking technique and can take some practice to get just right.

To get a ‘sweep’ with your pick means to do three or more downstrokes or up-strokes in a row quickly, on different strings, without it sounding like a strummed chord.

Many sweep picking licks make use of arpeggios, aka ‘broken chords’.

Although arpeggios can be played using chord shapes, usually an alternative shape is employed for the purpose of sweeping, as you can see in the diagram below.

This example is very similar to the A minor bar chord shape, but an additional ‘C’ is added on fret 3 of the A string.

Before you try sweep picking, have a go at playing the arpeggio forwards and backward a couple of times. When you’re ready, get that sweeping motion across the D, G, B, and E strings.

Make sure your fretting fingers are moving one by one.

Tapping On and Pulling Off

In this example, we have an E major arpeggio sweep, finishing with a tap on the 12th fret on the E string.

After tapping on the 12th fret, pull off to the 8, then sweep the rest of the notes on your E string back to your D string. You can move this arpeggio shape up and down your fretboard, transposing it to whatever major arpeggio you like.

Upstroke sweeping dominated the second half of the last example, but you can start a sweep with an upward sweep, too.

In the example above, an A major arpeggio is swept backward, with an upward sweep, before coming back down again.

This can be a desirable effect, and Becker’s licks often begin with upward sweeps. You can find upstroke sweeping as well as downstroke sweeping, littered around the legendary ‘Speed Metal Symphony’:

The example above is perhaps the simplest of these sweep picking patterns. However, although there are multiple fret 3s in a row, don’t be tempted to let it all ring out like a broken barre chord.

Although you can finger this like a barre chord with your first finger going across the 3rd fret, try to roll it over the strings in time with your sweeping pick.

This will give it a much more controlled sound that will suit the heavy metal style much better than sustained, ringing notes.

As you can see, the downstroke is ‘answered’ by an upstroke. 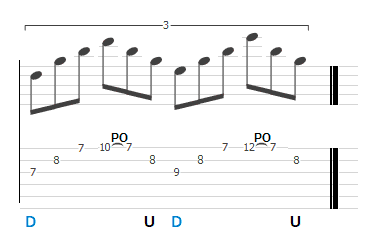 So, time to think about timing! When you’re sweeping, you usually play in either triplets/sextuplets or fast quavers/semiquavers.

It’s also only covering 3 strings. The tricky bit here will be getting the pull off and upstroke on the B string in equal timing to your sweep. 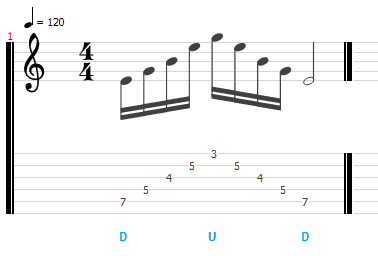 The E minor arpeggio in the example goes all the way up, back down again, then has a longer tonic at the end. This is to make it fit into a bar and sound smooth.

It also gives you a moment to prepare for whatever arpeggio shape comes next. Try mixing this with your A minor arpeggio from earlier.

If you can keep it consistent, you’ve nailed it.

Finally, let’s study the shapes for a major arpeggio and a minor arpeggio.

Here’s an A major arpeggio. As you can see, it takes many of its notes from the A major barre chord.

Try playing it as sextruplets, then transpose it two frets lower.

This is the A minor arpeggio again: the first shape you looked at. Try moving it two frets up. You’ll be playing a B minor arpeggio.

You can move these major and minor shapes all over the fretboard to change the key you’re in, and experiment with triplets, semiquavers, and sextuplets as you go.

There’s more than one shape for major and minor arpeggios, as you’ve already seen in the examples above, but it’s best to memorize one thing at a time.

Once you understand which notes belong in the arpeggio, and know how to find the notes on the fretboard, it’s easy to find the other shapes.

But that’s another lesson for another day :).

Sweeping is a technique that’s most at home in heavy metal and neoclassical music.

It can be a pain to get the hang of, but once you’ve mastered these sweep picking patterns, you’ll impress audiences time and time again.

It can sound tasteful when used sparingly, awesome when used in a big chunk, and coolest, in my opinion, when played as sextuplets with a tap on the end.

You can mix sweeping up with taps, pull-offs, and even hammer-ons, just take care not to let it slip into messy playing.

When you’re practicing, however tempting it might be to switch the distortion up, keep it clean so you can tell if you’re getting it right.

When you’re confident you’ve mastered it, whack up the gain.