14 Top Tunes from The Beach Soundtrack 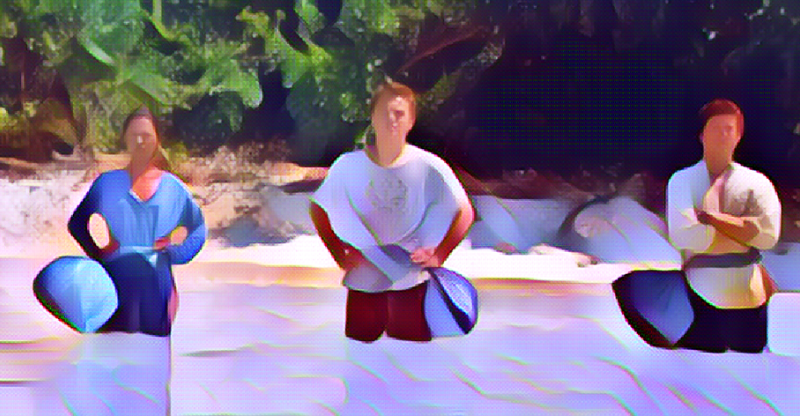 Starring Leonardo DiCaprio after his breakout roles in the 1990s, the movie tells the story of three friends, Richard, Francois, and Etienne, who travel through rural Thailand searching for a hidden paradise island.

The band’s name “Leftfield” refers to a modern genre of music that was the first to blend house music together with reggae and dubstep. Leftfield duo Neil Barnes and Paul Daley came up with the idea for the new genre around 1989 when they formed their group. ‘Snakeblood’ plays during the opening credits.

The Beach is about a freelance traveler (Richard) looking for a long-lost paradise island. All Saints’ song ‘Pure Shores’ was chosen for the soundtrack because it perfectly captures his mindset during his mind-bending adventure. The tune plays during a scene as his love interest Francois invites him to the beach for a swim.

Related: Enjoy a day on the beach with this beach music playlist.

“Then I wake; it’s kaleidoscopic mind.” Moby wrote ‘Porcelain’ about an “ill-fated romance” and the song plays during Boyle’s film as the three main characters, Richard, Francois, and Etienne, are shown the supposedly utopian beach for the first time after traveling through Thailand.

“We sailed over seven seas, searching for that missing key. Unlock a new world harmony.” Dario G’s ‘Voices’ is featured on the 2000 soundtrack to Leonardo DiCaprio’s psychologically unnerving film, The Beach. The movie finds three friends traveling the Gulf of Thailand searching for a hidden beach. But they find much more than they bargained for. ‘Voices’ plays during a scene after the main character Richard returns from a food run and brings his love interest, Francois, a gift.

Related: Sail over to the best songs about the ocean.

Underworld’s song ‘8 Ball’ was included to help create more psychological and physical tension for the viewer during the film. The noteworthy song by the electronic group appears during a scene when Richard and his friends are on their way to a secluded park after discovering a sought-after hidden beach in Thailand.

Originally penned by artists Brian Eno and John Cale, Sugar Ray recorded a cover version of ‘Spinning Away’ for the soundtrack. The African-inspired tune pairs well with long shots of rolling blue waves and endless beaches during transitional scenes in the movie. The tune originally appears in Cale & Eno’s excellent 1990 album, Wrong Way Up.

Originally released in 1969 by Jamaican band The Upsetters, Asian Dub Foundation covered the tune for the movie. The electronic music band is known for its combination of several styles, including dubstep, rap, reggae, and rock. The song’s title, ‘Return of Django,’ refers to a mid-1960s spaghetti western film titled Django.

On Your Own (Crouch End Broadway Mix) – Blur

Frontman Damon Albarn of Brit rock band Blur (who also heads up the virtual music group The Gorillaz), featured his song ‘On Your Own’. The song is heard during a pivotal, climactic scene when the main character Richard reaches a mental breaking point and has a meltdown in a Thailand jungle.

Related: Mixed emotions? Here are the best songs about feelings.

This 1984 single release by Guinean artist Mory Kante gained even more popularity among rave and club attendees in the ’90s. The intense dance song made the ideal addition to the flick, and the tune can be heard during a scene towards the end of the film when the commune DiCaprio’s character becomes a part of has a party on the beach.

Related: If you need some party tunes, see our playlist for dance party.

“I need room to be where I want to be. No need to zoom or rush.” The lyrics, which highlight the need for a different kind of life than society wants, are a major theme of the movie. The song plays as the story heats up and three friends embark on a harrowing journey to find a hidden beach in Thailand.

“It all just… got out of control.” Pop-rock artist Barry Adamson’s eclectic song ‘Richard, It’s Business as Usual’ fits well with The Beach’s over-the-top and, at times, zany soundtrack. The song’s lyrics feature a protagonist questioning his sanity, which goes hand-in-hand with the film’s main character’s psychological torment.

Rock band New Order first released their tune ‘Brutal’ in 1994, but it was re-released on this soundtrack. The rock song pairs well with an early scene in the film when the three main characters, Richard, Francois, and Etienne, arrive at a beach they’ve risked their lives looking for while in Thailand.

Related: Enhance your perilous journey with friends with this friendship songs playlist.

“God knows you’re lonely souls.” This moody, alternative dance number plays at the end of the movie as the credits roll. First appearing on Unkle’s 1998 album Psyence Fiction, the song stands as a way to usher the viewer to return to a more relaxed state after experiencing the main character Richard’s psychological and physical trauma at the hands of an unassuming commune on a remote beach in Thailand.

Related: Here’s our list of songs about feeling lonely.

A fan-favorite among Angelo Badalamenti listeners, ‘Beached’ was first a solo project for the techno-dance artist, but Orbital was brought on for a remix specifically heard in the movie. The song’s heavy bassline instrumentation and flowing strings pair well with the high-octane moments scattered throughout the movie set against the backdrop of a seemingly pristine island.