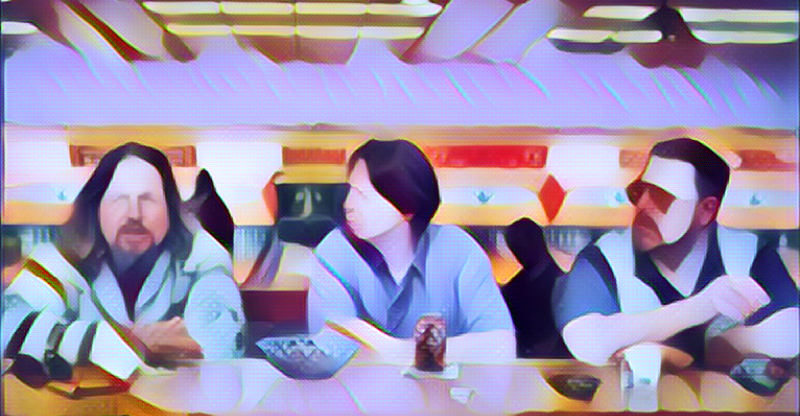 The Big Lebowski might seem like an over-the-top film, but The Cohen Brothers included a philosophical and socio-economic side to their 1998 film. The main character, The Dude, represents the hippies of the ’60s and ’70s. The man he’s mistaken for, Jeff Lebowski, represents the businessmen of ’80s Wall Street America.

Psychedelic rock, folk music, and the occasional soul tune can be found in The Big Lebowski soundtrack as The Dude tries to clear his name and take back what is rightfully his.

The Man in Me – Bob Dylan

“Oh, what a wonderful feeling, just to know that you are near.” Before appearing in The Big Lebowski, Bob Dylan’s romantic tune was a wedding favorite often played as couples tied the knot. In the film, it plays during the opening scenes and a pivotal moment involving The Dude and his love interest of sorts, Maude.

Related: Check out our list of songs about marriage.

This psychedelic-laced tune symbolically represents The Big Lebowski’s hippie protagonist. From the blue in The Dude’s beloved rug that gets stolen to the blue in the eyes of his eccentric love interest Maude, ‘Her Eyes Are a Blue Million Miles’ is an ideal tonal representation of the main character. It plays as The Dude continues his day practicing tai chi while sipping White Russians.

Related: Here are the best songs about blue eyes.

The Cohen Brothers wrote and produced the late ’90s film The Big Lebowski. For some of the music, they called up their old buddy, music producer T Bone Burnett, who worked with them on the soundtrack to their 2001 film O Brother, Where Art Thou?. T Bone also produced this Elvis Costello tune, and it plays through The Dude’s headphones as he waits in a doctor’s office.

Related: Head over to the O Brother, Where Art Thou? soundtrack.

Though Yma Sumac’s ‘Ataypura’ was included in The Big Lebowski soundtrack during a scene featuring a beachfront party in Malibu, her popularity peaked in the 1950s. Her Peruvian heritage and 5-octave range set her apart, and she became an important figure in the “exotica” music movement during the decade of the ’50s. She is still considered to be the best-selling Peruvian artist of all time.

The song that plays in a movie within a movie, ‘Traffic Boom’ is heard coming from the TV as it plays during the “fictional” film ‘Logjammin” in The Big Lebowski. Piero Piccioni was an Italian-born composer and lawyer with over 300 soundtrack compositions and credits to his name.

I Got It Bad (And That Ain’t Good) – Nina Simone

Nina Simone’s song ‘I Got It Bad’ plays in its entirety during a post-love-making scene between The Dude and his love interest Maude. As the song plays, he tells Maude his life story upon her request. As the tune ends, he makes a phone call and learns the real reason Maude seduced him; she wants to get pregnant.

Known for his “visual style” of music due to his blindness, Moondog developed a cult following over decades as he roamed New York streets dressed as a Viking. His tune ‘Stamping Ground’ plays during The Big Lebowski when The Dude learns why he really got caught up in a case of mistaken identity.

Hand-picked for a scene involving a drug-induced string of hallucinations and flashbacks, the scenes were filmed to go along with the song ‘Just Dropped In’ by The First Edition. The crossover band featured Kenny Rogers at the time, and country legend Glen Campbell even lent his guitar skills for some of the songs during the recording.

Related: Remember to listen to the best memory songs.

A folksy, nonsensical piece, Meredith Monk’s ‘Walking Song’ plays as The Dude’s love interest Maude takes him on an interesting tour of her feminist art collection on display in her paint studio. The tune debuted just a year prior to the film’s release. It first appears on her 1997 album, Volcano Songs.

Related: Keep up your pace with the best songs about walking.

“Joy, that near to me remained.” This German composition dates back to the 1920s. Other names for this operatic story based in Belgium are ‘Marietta’s Lied’ and the ‘Lute Song.’ It tells the story of a man entranced by a dancer. Their romance creates an uplifting aspect to the opera, but life’s transitions are at the heart of the tale, so elements of sadness are also included.

At one point in The Big Lebowski, The Dude finds himself chatting it up with a key player in the adult entertainment industry played by acting legend John Goodman. As they converse, Henry Mancini’s gentle and intriguing ‘Lujon’ simmers in the background. Mancini was a highly successful composer for many movies and TV shows. He’s also credited with composing the famous Pink Panther theme song.

The Dude’s main enemy in The Big Lebowski is the man he’s trying to track down who shares his same name and has turned his life upside down due to a case of mistaken identity. But as an avid bowler, The Dude’s other arch-rival is Jesus, who he often competes against at the bowling ring. As Jesus appears in the film, a Spanish cover of The Eagles’ ‘Hotel California’ is featured.

Related: If you’re fighting with someone, listen to the best enemy songs.

German for “We believe,” ‘Wie Glauben’ plays during one of the final scenes of The Big Lebowski featuring a band of delinquent Germans. Compose Carter Burwell wrote the song, and a few others, specifically for the movie. During the Germans’ scene, the song plays as source music coming from a boombox and has an electronic-pop vibe to give it a more European feel.

Songwriter Townes Van Zandt passed away just one month before The Big Lebowski film production began in 1997. ‘Dead Flowers’ is a rare cover of his. The Rolling Stones first released it in the ’70s, and the tune is comprised of all things “cowboy culture,” which the Stones often worked into their brand and sound. The song plays in an emotional moment for The Dude as he says goodbye to one of his best friends, and the credits begin to roll.

Related: You can hear this song on our list of flower songs.