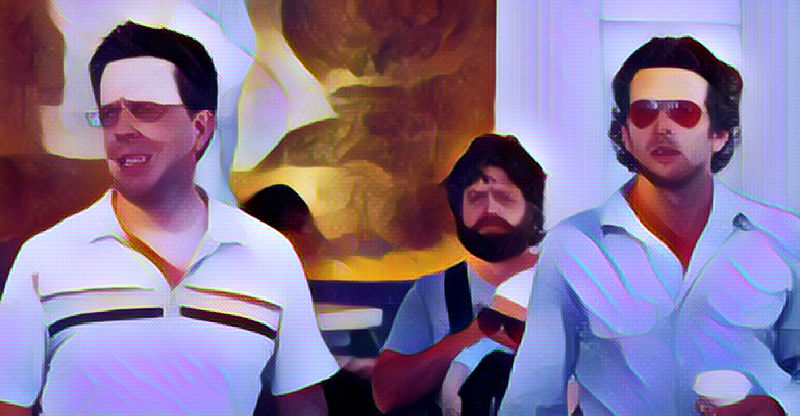 The Hangover trilogy has etched itself into pop culture history since the release of the first movie installment in 2009.

The films, starring actors Bradley Cooper, Zach Galifianakis, and Ed Helms, follow three best friends and a “third wheel” they’re forced to bring along as they take a trip while celebrating a bachelor party.

Check out The Hangover soundtrack below, featuring hits from popular artists like T.I., Rihanna, and Usher. Remember what happens in Vegas stays in Vegas!

Originally written by composers Eddie Cooley and Otis Blackwell, The Cramps’ cover of ‘Fever’ can be heard in the third installment of The Hangover trilogy. The Cramps are an alt-punk band formed in the 1970s. Music critics could never box in their wild sound, so throughout the years, they’ve been categorized as many different genres, including the seldom-heard “psychobilly rock n’ roll.”

In the Air Tonight – Phil Collins

This eerie, haunting song performed by ’80s songwriter and musical icon Phil Collins appears in the first of the trilogy. Its moody composition lends itself well to the film, which follows several best friends embarking on a drama-filled bachelor party trip. ‘In The Air Tonight’ was released on Collins’ 1981 album, Face Value.

Related: Find this song on our playlist of the best betrayal songs.

Who Let the Dogs Out – Baha Men

‘Who Let the Dogs Out’ is a quirky song any ’90s kid will instantly recognize. It pairs perfectly with the adrenaline-filled shenanigans the characters in The Hangover get themselves into. Zach Galifianakis plays Alan, a remarkably gifted troublemaker in the movie, and his character lends his vocals to this song in The Hangover’s first film.

Related: Fetch our list of the best songs about dogs.

Three friends and an annoying tag-along (played by Zach Galifianakis) embark on the trip of a lifetime before one of the main characters (Doug) ties the knot. What could possibly go wrong!

Kanye West has several songs featured in The Hangover trilogy. His tune ‘Can’t Tell Me Nothing’ appears in the first of the movies. Released in 2007, the single features backup vocals provided by Young Jeezy, a fellow rapper who often co-writes with Kanye West. The song was well-received and became closely associated with the movie. One of the movie’s actors, Zach Galifianakis, appears in a music video for the single lip-syncing to the song.

This R&B classic features two powerhouses, each in their own right, rap icon T.I. and pop/R&B superstar Rihanna. They come together for a high-octane anthemic hit with ‘Live Your Life.’ Its infectious beat and heavily compressed production add to the drama of the hit film The Hangover. The song continues to be one of T.I.’s highest-charting songs of all time.

Joker and the Thief – Wolfmother

Australian band Wolfmother’s popular tune ‘Joker and the Thief’ refers to Bob Dylan’s hit song ‘All Along The Watchtower,’ which Jimi Hendrix also famously covered. The song is one of the band’s most successful tunes and is featured in the first movie of the trilogy. Not only was it featured in that film, but it has also been placed in several other movies and TV shows, including The Blacklist and Impractical Jokers.

Related: You can find Bob Dylan’s song on our playlist of all-time classic songs.

With one word, Usher scored one of the biggest hits of his career with ‘Yeah.’ For the single, he also made sure to have rap legends Lil Jon and Ludacris guest appear. It is featured in the first film starring Zach Galifianakis and Bradley Cooper. The classic club hit adds to the party-centric vibe of the movie as it follows several friends on a bachelor party trip.

First released by Elvis in the ’60s, El Vez’s early ’90s version of ‘It’s Now or Never’ was featured in the first flick. It plays during the opening credits as the characters are introduced to viewers. Other artists such as Chris Isaak have also recorded popular versions of the song. Because it’s the first song you hear in movie, El Vez’s version has become closely associated with the now-infamous film trilogy.

Take It Off – The Donnas

In the first of the flicks, the crew head out on a trip to Las Vegas as they get ready to celebrate their buddy Doug’s bachelor party. The Donnas’ ‘Take It Off’ is featured in the film as they make their way to Las Vegas. The Donnas are an all-girl rock group hailing from California who got their start in 1993.

Related: Hear about Las Vegas and other places on our list of big city songs.

The opening credits of the original The Hangover movie feature a few different tunes. One of those is Danzig’s ‘Thirteen.’ The heavy metal band released the tune in 1999, but it was actually originally written for outlaw country icon Johnny Cash for an album of his that was released in the early ’90s.

Related: You can count on us—these are the best songs with a number in the title.

Originally written in 1929, over the years after its initial release ‘Wedding Bells (Are Breaking Up That Old Gang of Mine)’ became known as a “barbershop song” and gained popularity. Gene Vincent’s 1956 version can be heard in the original Hangover movie. It was included in his 1950s album, Bluejean Bop.

Ed Helms stars as Stu, one of the main characters in The Hangover trilogy. We are introduced to his musical prowess in the first installment when he sings and plays guitar while casually performing an impromptu original. When viewers get a taste of ‘Stu’s Song,’ the crew is dealing with a particularly difficult tiger, and they are trying anything to calm him down.

Rhythm and Booze – Treat Her Right

Zach Galifianakis’ painfully awkward character Alan sings one of his own little ditties in The Hangover film. A now-famous one-verse song featuring the lines “We are the three best friends that anyone could have” is often jokingly recited as a pop culture reference these days. As the crew makes their way to a location in the desert to try and save their soon-to-be-married friend Doug, Galifianakis sings this song.

Related: Celebrate your bestie with these best friend songs.

The Hangover movie features quite a bit of driving, and Revolution Mother’s ‘Ride the Sky II’ is featured during one of those car rides. The song was recorded specifically for the original Hangover film and is included in the movie’s 2009 soundtrack. The song plays as the main characters make their way back home.

‘Candy Shop’ is a popular 50 Cent song, but as the wedding finally happens in The Hangover movie, viewers are treated to a special performance of the song by novelty wedding band The Dan Band. People were first introduced to them in Will Ferrell’s hit movie Old School when they sang a hilarious version of ‘Bright Eyes.’ They give an equally riveting performance of ‘Candy Shop’ in The Hangover. The Dan Band isn’t just for show. You can actually hire them for your own wedding as well.

Related: Here are some more songs about sugar. Sweet!

The gang is at it again in Hangover Part II, but they head to Thailand this time. As the crew heads to the airport and they learn Alan is once again coming with them, Kanye West’s ‘Stronger’ plays. This song sampled Daft Punk’s ‘Harder, Better, Faster, Stronger,’ and Kanye’s version was sampled by 30 Seconds to Mars.

Related: This song features on our playlist of hype music.

The Hangover trilogy used several of Kanye West’s songs. In Hangover Part II, one of his tunes featured is ‘Monster.’ The song accompanies a toast on the beach between the movie’s main characters. The star-studded track features Bon Iver, Rick Ross, Nicki Minaj, and Jay-Z.

Related: Don’t get too spooked with these monster songs.

Several artists who had the honor of making the cut on the original Hangover soundtrack had another opportunity to be featured in Part II. Wolfmother is one of those artists. Their tune ‘Love Train’ is featured as the group has to hop on a boat and take a ride to make it to a wedding.

Ed Helms, who plays Stu in The Hangover trilogy, is back at it again in Part II, putting his songwriting skills to work. He serenades viewers with his guitar and vocals as they ride on a speedboat. The song is a parody with lyrics detailing how the friendly, unassuming antagonist of the film series, Alan, has once again made their lives a living hell.

The Hangover Part III features “the wolfpack” having one final hurrah. In one scene of the movie, wolfpack creator Alan fights with his father and puts his headphones on in defiance. Billy Joel’s ‘My Life’ plays during this exchange. The 1978 tune was featured on Joel’s album, 52nd Street.

The third installment of the Hangover series features a very Alan-centric storyline. As Harry Nilsson’s ‘Everybody’s Talkin” plays, Alan and his friends are whisked away to a psychiatric ward. Though this popular song is often associated with Nillson as the songwriter, it was actually written by a lesser-known folk writer out of New York’s Greenwich Village area, Fred Neil.

Related: Rain or shine, you can rely on our list of the best songs about weather.

Down in Mexico – The Coasters

The Coasters’ music is featured during a montage scene in The Hangover Part III. The shots center around the characters making their way to Mexico. Stu, Phil, and Alan are all piled into a car as they drive along desolate highways and ‘Down in Mexico’ plays. The 1957 vintage R&B tune pairs well with the desert-inspired scenes.

Related: No trip is complete without the best songs about driving.

While Alan spends much of the trilogy acting as the main antagonist who continuously gets the group in trouble, in Hangover Part III, viewers get to know Mr. Chow, another antagonistic character literally giving the guys a run for their money. Black Sabbath’s ‘N.I.B.’ plays during a party scene when “the wolfpack” looks for Mr. Chow.

The Hangover film takes viewers on a journey around Las Vegas, so naturally, the main characters would spend some time in a casino. The Belle Stars’ ‘Iko Iko’ plays during a blackjack scene. This ’80s New Orlean’s-inspired song tells the story of a Mardi Gras parade collision. Given the chaos the main characters experience during the film, the song’s subject matter is super fitting for the soundtrack.

Mr. Chow does a lot of singing in Hangover Part III and one of the songs he croons while spending time in a bar is Nine Inch Nails’ infamous tune ‘Hurt.’ While this song was already popular when the rock band released it, Johnny Cash made history by releasing his own stripped-down version of the song just before his death in 2003.

Related: If you need to induce tears, check out these good sad songs.

Kanye’s music is front and center with ‘Dark Fantasy’ in the final installment of The Hangover series. The song accompanies a particularly dramatic running scene made all the more poignant by the film crew editing it in slow motion. The message of the song pairs well with the over-the-top partying and antics that take place throughout the trilogy. In the song, Kanye talks of living a “hedonistic” lifestyle in pursuit of numbing his pain.