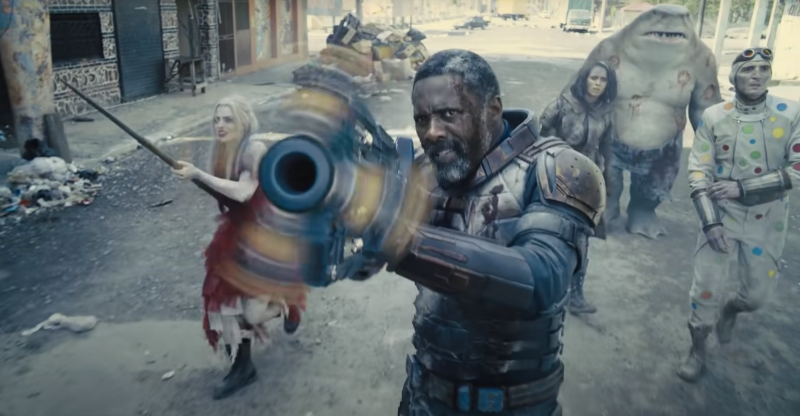 James Gunn added to the DC comic universe with his 2021 film The Suicide Squad (not to be confused with ‘Suicide Squad’, a different movie released a few years earlier). The movie features supervillains, both fresh-faced and familiar, corrupt politicians, and a secret program set to take over the world called Project Starfish.

As you’re about to hear, the Suicide Squad soundtrack has an eclectic mix of songs, from Brazilian-inspired tunes, to indie, to some smokin’ hip-hop tracks.

Ok, time to hear it for yourself. Enjoy 🙂

A live cut of Johnny Cash’s infamous ‘Folsom Prison Blues’ can be heard in the background during the beginning scenes of the movie. A prison scene featuring a lone inmate is the focus as Cash croons. Johnny wrote his hit tune in the early ’50s when stationed overseas while serving in the Air Force.

Related: Find this song on our playlist of songs about being on the run.

Appropriately titled ‘Sucker’s Prayer,’ the song fits perfectly into a scene featuring the main character Bloodsport (his real name in the movie series is Robert DuBois). After a fight to the (almost) death with Superman, he is sent to the mental institution Belle Reve as punishment. This tune plays as he makes his way through the prison.

Related: Fighting with someone? Here’s a playlist of songs about arguments.

Newcomer Céu blends various Spanish-inspired musical styles for her music she calls a “melting pot.” The young singer-songwriter was thrilled to have her single ‘Samba Na Sola’ featured in the movie. Though she has garnered interest from quite a few major labels, she continues to produce her own music independently.

Whistle For The Choir – The Fratellis

DC Comics character Harley Quinn continues to be the franchise’s anchor, and in The Suicide Squad, she breaks free from The Joker and really comes into her own. The Fratellis’ ‘Whistle For The Choir’ plays during a montage of scenes featuring a brief but intense romance with yet another man who breaks her heart. True to her character’s hype, she quickly seeks revenge.

Related: Here are some more of the best songs with whistling in them.

A DC movie wouldn’t be complete without nostalgia-evoking musical additions. This song plays as the members of Task Force X (who are really just a bunch of supervillains trying to save the world, so they don’t die themselves) are meeting with a possible ally as they try to dismantle the evil “Project Starfish.”

Jessie Reyez’ ‘Sola’ plays as Task Force X is forced to bond on a long, tiresome bus ride. The song features yearning vocals delivered in Spanish with a heart-breaking message. The tune’s message about love and loss pairs well with one of the movie’s over-arching themes.

Related: Hit the road with the best song about traveling.

One of the few scenes in The Suicide Squad that allows the viewer to exhale is a scene where Task Force X drinks and dances in a club. As they briefly let loose, K.Flay’s ‘Can’t Sleep’ can be heard in the background. However, this light-hearted moment is short-lived as their cover is quickly blown.

Related: Dance the night away with the best party dance songs.

This Brazilian-inspired hip-hop number is played the whole way through during the long barroom scene. The 2019 release by artist Drik Barbosa was the first single off her debut self-titled album.

Canadian artist Grandson teams up with Jessie Reyez for ‘Rain.’ The song appears in a scene where the team is taken hostage. In true squad fashion, the veterans of the crew don’t seem worried. Bloodsport even takes the time to smoke a cigarette. The song centers around a metaphor for the hardships of life. Welcome the “rain” because that’s how “flowers bloom.”

Related: Soak it all up with more songs with rain.

Just a Gigolo / I Ain’t Got Nobody (And Nobody Cares for Me) [Medley] – Louis Prima, Keely Smith, Sam Butera & The Witnesses

‘Just a Gigolo’ is a song that has taken on many forms over the years. It’s a popular tune first adapted from tango in the late 1920s. Louis Prima made the medley popular with his rendition in the mid-1960s. This dynamic song accompanies one of Harley Quinn’s pivotal fight scenes.

This love-gone-wrong ballad from The Pixies’ critically acclaimed album Doolittle helps set a moody scene as Task Force X tries to carry out their mission in the rain. This more gentle tune is a sidestep for The Pixies, who often use a ‘go big or go home’ approach to their songwriting.

Bloodsport might be a supervillain, but that doesn’t mean he’s totally fearless. During this film, his fear of rodents is front and center because one of his fellow task force mates has a superpower that allows her to communicate with rats across the city.

Related: Show your bravery with these songs about staying strong.

Related: If you feel stuck in a rut, listen to these being trapped songs.